Thank you all so much for your lovely comments. I am truly touched by your loyalty in continuing to pop in to this too often empty space. Your simple acts of recognition and kindness across the ether are heartening and encouraging, a reminder of the quiet power of a few words,  a hastily written note, a virtual post card.

Words can be so powerful,. Even a simple list can galvanise. After that last post bemoaning my lack of action on those outstanding projects, I got my act together and actually finished one of them. It reminded me that at the beginning of this year - you know how it is with the greyness of January to be negotiated before things start looking up again- I decided to practice what I preach in parenting workshops and keep a gratitude journal. It had been a sad time for the family. My lovely Uncle Connie had died after several weeks struggling to recover after a long stay in intensive care following an accident at home, undiagnosed injuries and subsequent lung damage. Con was my dad's youngest brother, the last surviving sibling, the most cheerful, steadfast and constant of them all. He somehow had the knack of making us all feel favoured and much loved even though we were decades away from childhood and going grey ourselves. I felt hugely privileged to spend time with him during those bedridden weeks, just sitting by him as he slept, or keeping my aunt company as she chivied and cared for him, often pulling him back from the brink. It was an emotional and humbling time.

I first started the journal after Con's funeral in early January. It was no more than a few words every day squeezed into a diary. Writing down at bedtime two or three things I was grateful for helped much more than I expected. Looking back, they were modest everyday things,: porridge waiting for me in the morning, a visit to the theatre, the company of a friend, laughter, unexpected gifts, handmade lavender soap, comfortable boots, gin, earl grey tea, baked beans, kale (really? more than once too). Friends featured often, food and drink more than you might think, outings, labour saving devices, walks, Thames barges. Even St Katherine's Waitrose made an appearance: they are, after all, extraordinarily kind to my mum.

I decided it was time for a top up, before the dark nights kicked in, not least to get in the right frame of mind before the time arrived to turn on the heating and bemoan the lack of light. That was a couple of weeks ago.   My list now includes toast and cocoa, October sunshine and clouds, leaves, afternoons in the park, washing lines, vacuum cleaners, my teachers, fellow sewists, the 339 bus, and cream teas which I had an awful craving for a couple of weeks ago, now replaced by these spelt cookies. 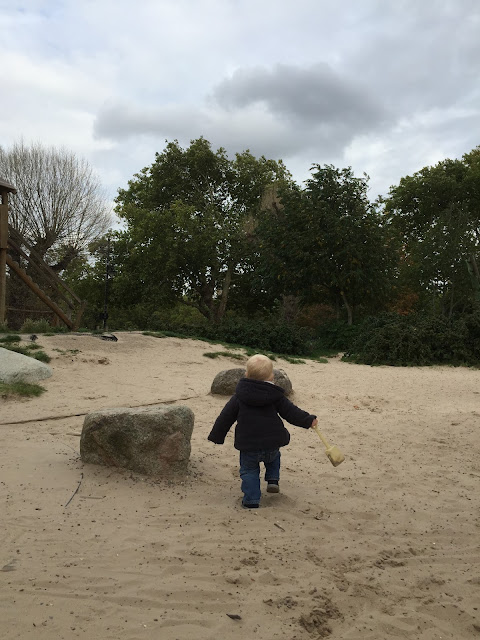 It's been good for me. Bring on November. I'm ready for it - almost. 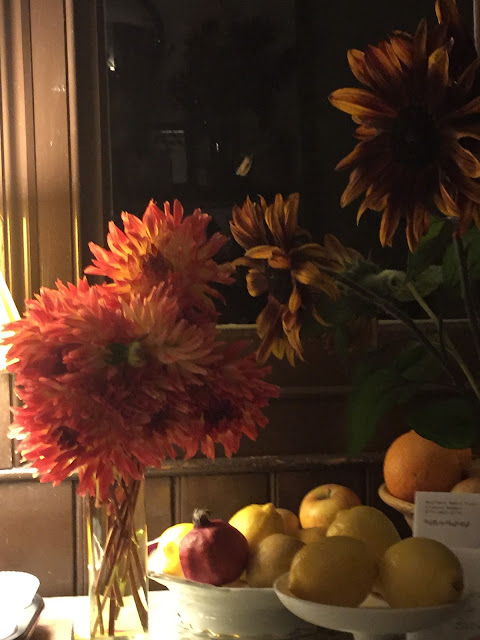 The shifting of the light, the cool mornings and hazy evenings, they all seemed to creep on me this year. One minute the sunflowers were towering magnificently above us but before long the  pre-equinoxial gales had left them bent and battered. Some we managed to prop up again and those we couldn't came home and filled every vase and mantlepiece with a blaze of autumn. The dahlias are holding on on defiantly but pretty much everything else is sending out a final hurrah. The carder bees that took up residence in the detritus at the bottom of the mullein have disappeared although the queen is probably tucked up until spring.The courgette plants and tomatoes, apart from one hardy black cherry,  have succumbed and the runners and French beans have handed in their notice too. Quite a relief to be honest. Whole families of squashes - butternut, Crown Princes and Queensland Blues have been cut and brought home. Yes. There will be soup, a lot of it. 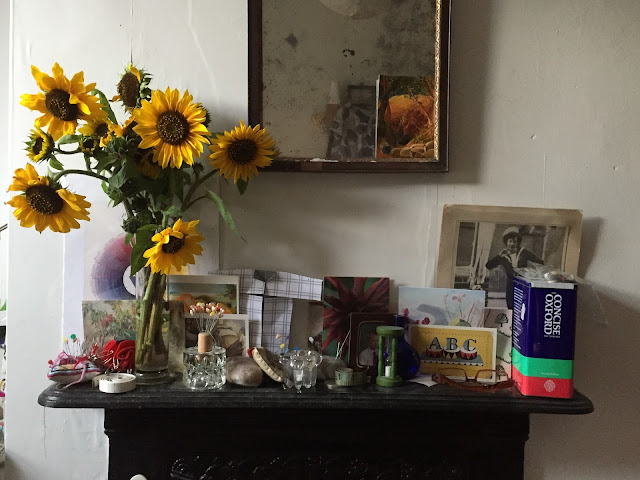 At home the kitchen is dark as the sun dips earlier and earlier behind next door's mulberry, a late leaf-dropper, and denser than ever. Candles are lit at night but it's a matter of principle here to hold out as long as we can from turning on the heating. The woolies and warmer clothes were unpacked a few weeks ago while others have been added to the jumble pile. Elsewhere in the house half-finished projects are packed on shelves and hang on hooks. Pyjama trousers, a gaudy shift, a new apron, a refashioned tweed skirt, a longline check jacket - a final push would see them finished if I could set aside the time and focus. That's only the half of it. I spent the last three Tuesday evenings taking Sew Over It's Francine Jacket workshop. Hems and buttons and buttonholes would finish the project. A few hours by a sunny window might deliver a happy ending to that story and the sooner the better.

Hold on. That's the sound of the front door closing. A gardener has just returned from work. He just called up the stairs "Are you asleep?"