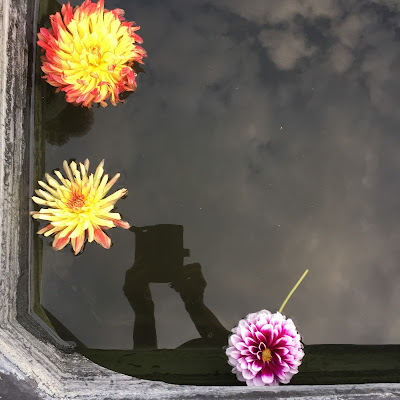 Down in the cellar we have a copy of one of my favourite children's books, you know the one, where Mrs Large finally escapes from her family to have a quiet bath. In peace. My fictional elephant sister has my sympathy. It seems I have entirely lost the ability to do anything that requires a bit of concentration or energy. Want to read a book? Not a hope  other than at bedtime when after around three minutes my eyes droop and I begin to snore. How about hemming that dress that's been hanging on the to-sew hook? Lost count of the number of needles I've lost after starting and deciding there's something more urgent to do. Sit down and write a blog post? The laptop is so seldom used it's like trying to break into Fort Knox, metaphorically speaking of course. Password mayhem.

So here I am. The Boy is asleep after helping out with the vacuum cleaning at home, throwing himself around on the bed with what can only be described as the utmost glee, shouting "dig, dig, dig!" at anything vaguely resembling a machine, running round the park, refusing to join in with Five Little Ducks at Storytime and, as a finale, attempting to ransack the lovely collection of board books in the library by pulling them out of the box and dropping them on the floor.

This is how it has a been for several months now. It's only for two or three days a week, but it is all consuming on those ten /eleven hour days. That's not to say we don't have fun and fine days out, but creative space seems to be in short supply when all the other demands are taken into account. There's time to dream, but converting that into anything concrete is entirely another matter. I'm hoping that the slower pace of early autumn, the reduction in urgency to fit everything in while the sun shines, the subdued light and colour will bring with it a bit of calm and, dare I say it, peace.

Time to put the kettle on. Quickly.