Thank you all so much for  your kind, encouraging and helpful comments on the back issue. It's only looking back from the vantage point of improving stamina, (mostly) better sleep and less discomfort that I can appreciate how much we take these things for granted and, in particular, how precious well being is. Ivy's tale is a wonderful, touching and ultimately uplifting example of the value of looking after ourselves - engagement, keeping active and meeting friends. (Thank you, Rachel)


It was not quite the case for my Aunt Lil - a trooper, a worker, a joker - who died a couple of weeks ago as she approached her 95th birthday. Despite stellar attentive care from her daughter and moving in with her family, mobility and progressive Alzheimer's resulted in Lil's transfer to a care home, where she fell and broke her hip, finally dying in hospital with her family at her side.


My mum's family, including Lil, were not really joiners-in. In a family with nine children, you aren't obliged to make an effort to find company or make close friends. But there are only two left now and I've watched my mum becoming more isolated and 'stuck', physically, mentally and socially. Older people like her are often left isolated by the changing demography of the East End, diverse and unfamilar cultures, confusing technology, unfriendly architecture, and local geography changing at such a pace that you can get lost going to the bank (which has probably closed down anyway). Without a doubt, old age requires the kind of resilience, energy, support  and zest for life that might even floor somebody years younger.


So captivity has been on my mind, my own included. When I signed up to 30 Days Wild, I imagined I might be visiting new places, trying out new ways of engaging with nature. What's happened instead is wild has come to me. So many escaped flowers; ferocious gothic storms; bats, wrens and goldfinches in the back garden; a young green woodpecker in the park; jays in the churchyard; a knowing crow surveying the allotments and an egret flying north overhead. And on those nights when sleep has been elusive, escapism into the world of Silas Marner, The Woodlanders and Alexandra Harris's wonderful Weatherland was available courtesy of I-player. (Pity I fell asleep during most of them and had to replay the next day.)

Wild, it seems, can be quite subdued if you look and listen in the right places.

Next up - a tale of pioneers, making, and other important stuff. 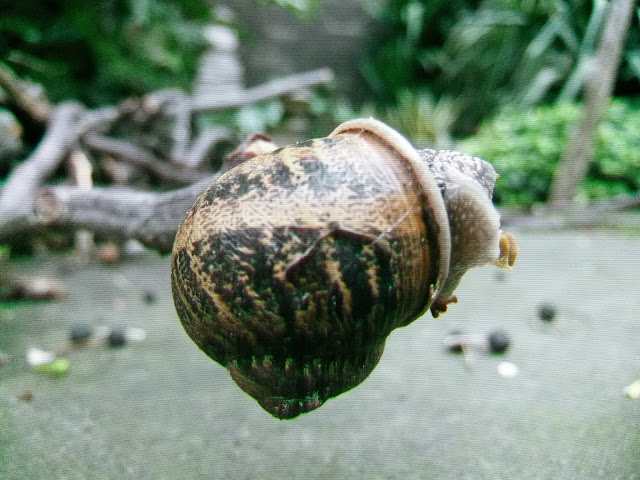 If you live on the east of the country, the last few days will probably have delivered storms, and rain, and temperatures sufficiently uncomfortable to make you unpack  the woolies you have so carefully stored away from moths or even light a fire. You may even have been aghast to see the snail population emerge. Here they crept from beneath the ravaged acanthus leaves to make a bee line (wait, is that possible?) for the ends of fig tree prunings where various members of the troupe are showing off their circus skills .

If only I too could show off even a semblance of the snail's agility. Clowning might be a possiblity, but anything involving the least bit of contortion or strength is off the agenda. Here is a short version of the saga. Sometime in early March I fell down the cellar stairs, landed chest first on a newel post, summersaulted with a crash onto my right side and lay there winded and shocked. I suppose adrenaline kicked in, because once I was rescued and got my breath back I felt battered and bruised but thought as nothing seemed to be broken all would be well. And apart from some interesting Just William style bruising, it was, for a while at least, fine. Then, gradually, something went in my back and despite various consultations with osteopaths, acupuncture, homeopathy and, finally, a visit to GP who was happy to prescribe painkillers and give me a number for the local NHS physiotherapy service which never answered the phone but not investigate further, I am still decidedly lopsided and in pain. I resorted to some interim private physio (nerve gliding anyone?) and, after a 10 week wait montht, look forward to seeing what the NHS has to offer at the end of this month.

Now one of the things I learnt earlier this year when I did this interesting little Futurelearn course was that the speed of walking is a useful rule of thumb indicator for healthy ageing. My walking speed, and coverage, has diminished considerably, so not good. And who knew that discomfort and lack of sleep sleep was both debilitating and demotivating? Over the last few months I've managed to keep up with other existing commitments - managed a break at the seaside, visits to the allotment and friends, a bit of volunteering - but beyond that it's all been a bit hit and miss. Sadly this little space seemed to be just out of reach. But a half term break, Sian Williams Radio 4 piece yesterday on resilience, and a reminder in my inbox about 30 days Wild  have prompted me to get on and get out. That and missing what goes on here and the visitors who drop by. Virtual visits, often invisible, to your own domains have been a pleasure and now it's payback time.

Stepping outside the back door to observe an acrobatic snail might not be the wildest thing I've ever done, but one small step and all that.