in my spice box 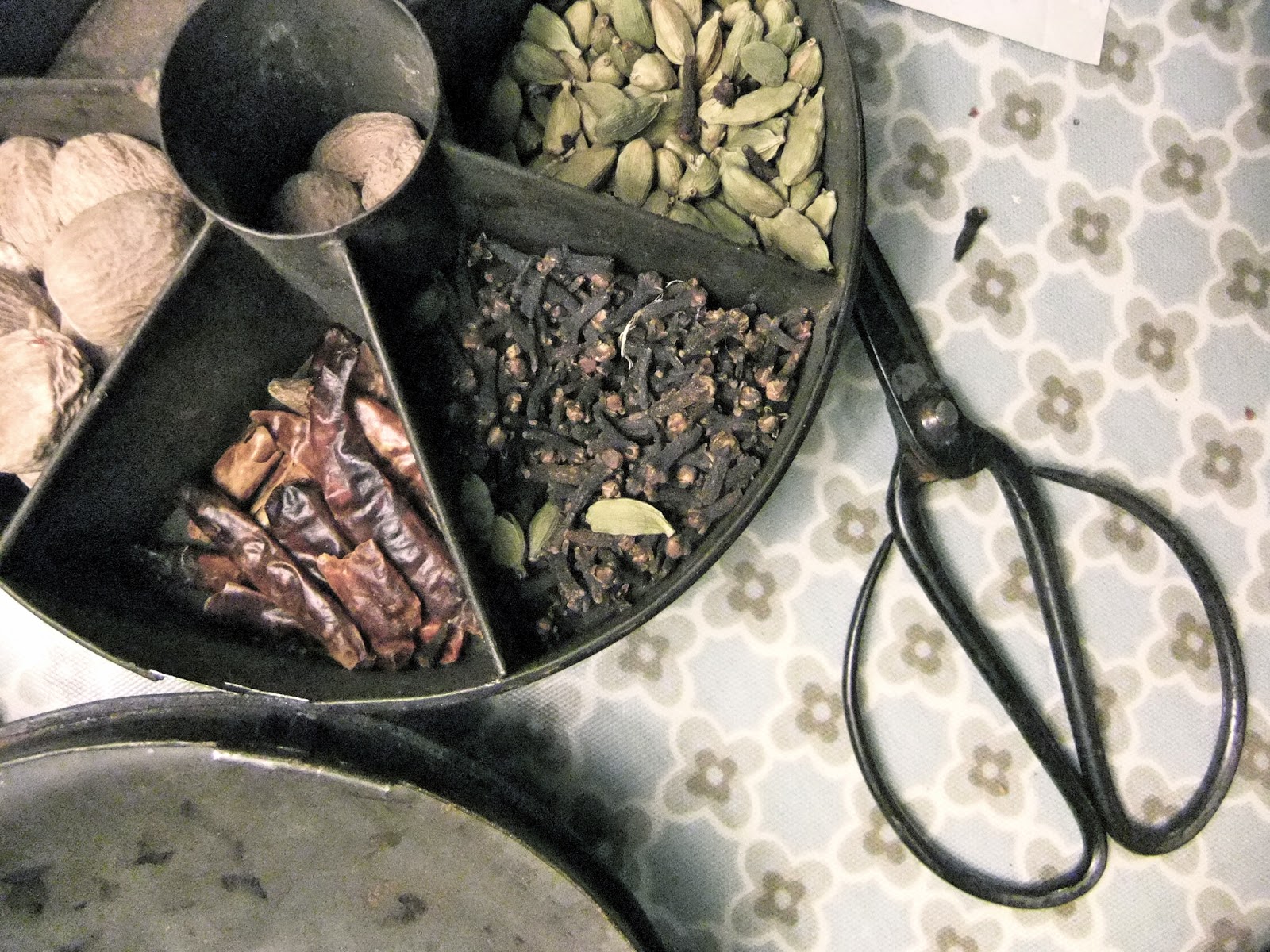 My dentist and I are on quite friendly terms after all these years and this morning we were talking about cooking - probably not an ideal topic of conversation when your mouth is about to be assaulted, but there you are. She told me that her mother, who had given up her career when she had children, was a brilliant cook but had never passed on her knowledge so she wanted to make sure that her own children were confident in the kitchen rather than having to learn from books as she had. Her husband, she said, was also a great cook - Punjabi dishes, lots of meat whereas her own mother had cooked mostly vegetarian dishes. "Our spice boxes are very different", she said, "though I am very fond of his dal".

Such a lovely thought - each partner bringing different spice boxes and fragrances to a a family. As a child the most exotic thing we had in our home was white pepper, even though the bricks and mortar of Wapping were heavy with the scent of spices. In our own home we have only one spice box - mine - newly refreshed in winter for the pudding-fest but not exotic by any means. I think of it as a very "British" spice box - nutmeg cloves, cardamom the box, ground ginger, cinnamon, cumin, allspice. Nothing very adventurous and easily and cheaply replenished at any of the local grocers. I think it's time for me to try a little harder, be a little more adventurous, more confident. I've always avoided Indian cookery because I don't care for food that burns my mouth, but it's about much more than that and I want to be more adventurous.

My dentist is going to think about what books might help, and suggested that in the meantime I should get myself down to Forest Gate to eat. By the next time we meet I hope to have cleared out my store to make room for some fresh flavours and a new book or two.

What should I make room for do you think? What's in your spice box? What would you recommend?

Email ThisBlogThis!Share to TwitterShare to FacebookShare to Pinterest
Labels: cooking, something new

You've prompted me to look in the spice cupboard here and I've counted 44 jars and 4 tins which include your staples. I'd probably recommend adding turmeric (one of my favourites) if you don't already have it in your box, maybe saffron (which is mild and goes well with smoked paprika), plus some seeds to toast and grind - fenugreek, fennel, black mustard, coriander, cumin, maybe nigella. Then there's tamarind which you can buy as a paste. It's probably a good idea to just play around with combinations to find out what suits your taste (just go easy on the chilli if you want to avoid too much heat). We did try asafoetida once. Never again. Smells like dung!

I love smoked paprika. There is a very hot version but also a milder one often called sweet smoked paprika. And like Liz has said, fennel and fenugreek are also very good. Have fun!

Thank you, ladies! I'll look out for sweet smoked paprika and will also get hold of some fenugreek and other seeds, some of which I have already but don't get round to using. I've ordered some books from the library to try too - we have an amazingly good collection there. I'm inspired and that might very well be what makes the difference.

I have a fridge door full of spices, thanks to an inspired gift from a friend who listened to me moaning about the lack of a decent Asian store anywhere near where I now live. Oddly, I find I use spices beginning with C more than the others - coriander, cumin, cinnamon, cardamom - although for health reasons try to add a pinch of turmeric to dishes when I can. If you aren't fond of very hot spices, try Anjum Anand's books - her recipes are lovely but a tad too mild for my taste - I usually have to spice them up a bit with more chilli.

Further recommendations for sweet smoked paprika and turmeric from me.

Yes , definitely smoked paprika and , my favourite , Ras el hanout for adding a little warm spiciness to chicken .
North African cooking doesn't have to be complicated and there are lots of recipes online .
It'll keep you beautifully warm till Spring , anyway !

A pinch of allspice does several good things to ground meat, but only a pinch