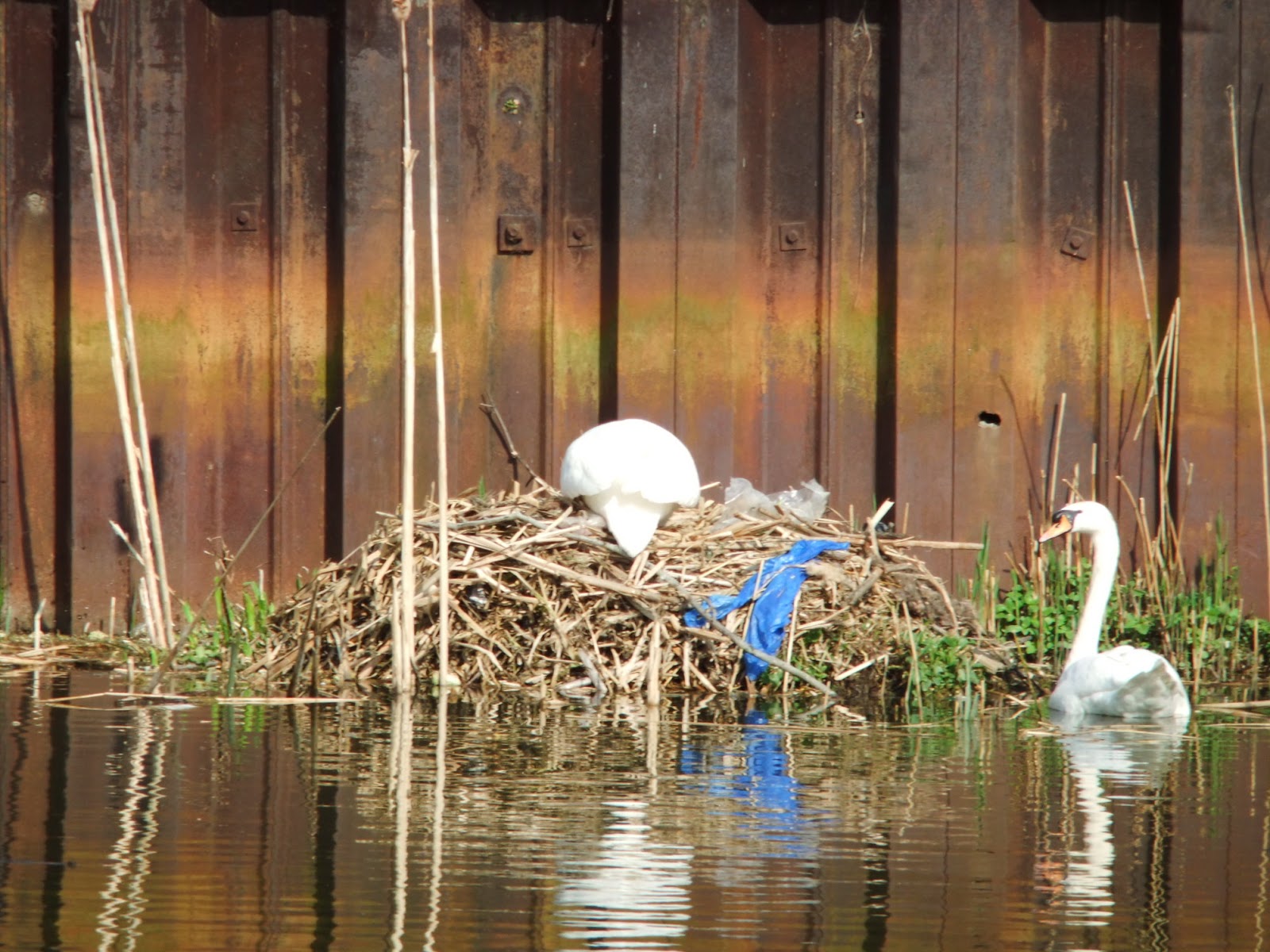 It was warm yesterday - bare-leg warm by the afternoon. It had been a busy morning, the last of a series of weekly workshops I'd been running with some women in Whitechapel, bittersweet to say goodbye and good luck. I'll miss them. There was a lot to do back home, but that British summer time lost hour takes some getting used to, so in the end I thought the best thing was to get to the plot and do nothing, absolutely nothing. No sowing, no sewing, no reading, just a bit of space and quiet.

I cycled along the back streets, cut across the Bow roundabout and nipped onto the River Lea path to Three Mills for the last leg of the journey. It's a ride I enjoy because you're below the main roads and it's quite spacious. For now. A pair of swans were nesting, quite possibly the foolish pair who normally make their nest on the tidal part of the river further round by Three Mills, only to have their nest flooded and their eggs scattered on the mud. 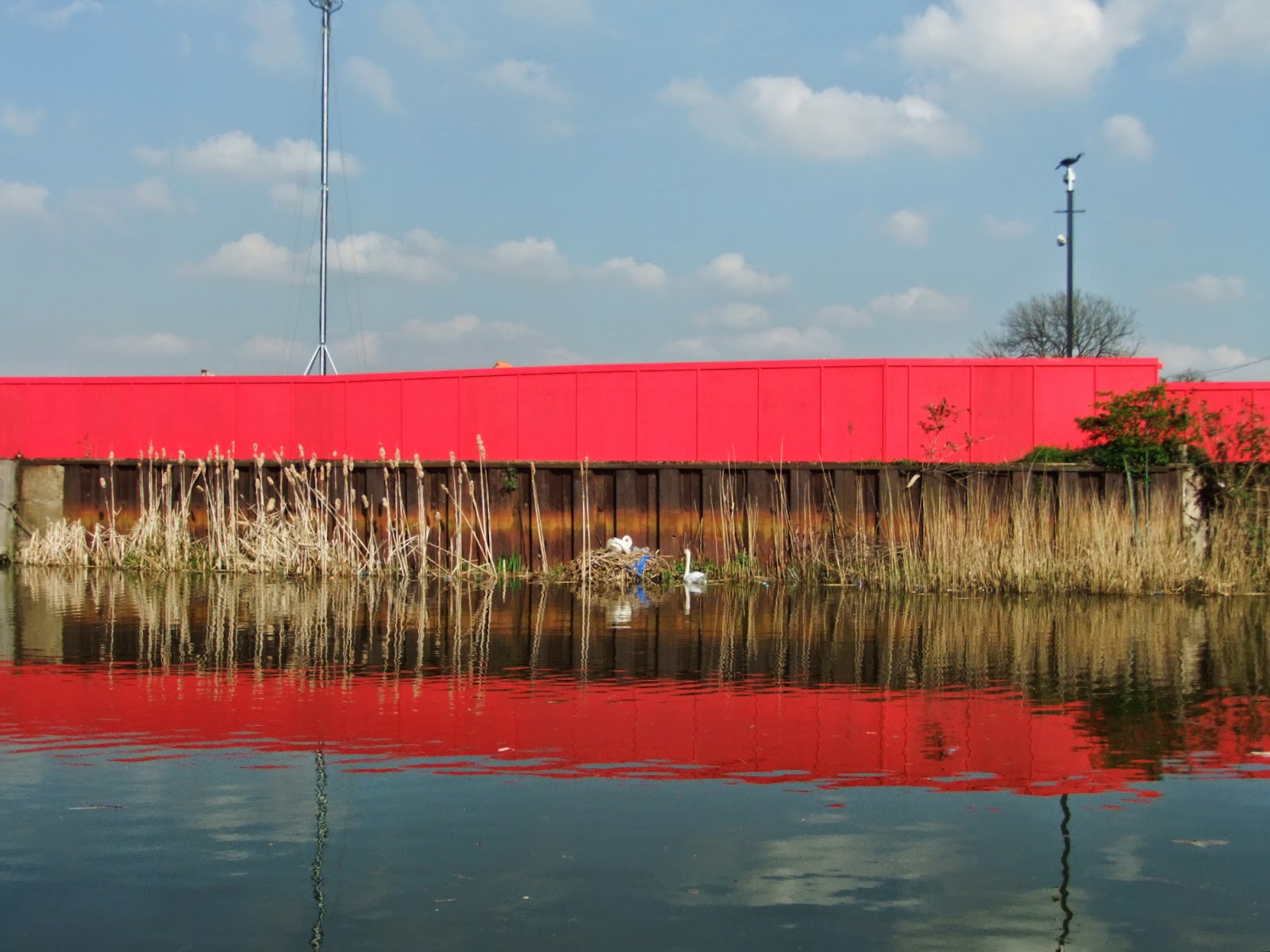 Hopefully they'll pull it off, this year at least. Behind them a new red fence has gone up, and behind that the remaining industrial buildings have all but disappeared. This time next year the view will be completely different as the building work proceeds. It's no good whining about any of this, not for too long anyway. The pace of change around here is taxing, it always has been in London, but just now it seems to have accelerated.  People probably felt the same when this pretty as a picture collection of industrial buildings were erected. All the more reason to find a bit of space now, however small it might be.

When I reached the allotment, I pulled out the old comfy chair and sat on our tiny bit of lawn to enjoy the space and the warmth. It wasn't quiet exactly. Huge peacock butterflies did that fighty thing in the air, and when they'd finished with each other, chased off the orange tips.  Hoverflies and solitary bees flitted through the overgrown rocket and the yellow flowers of gone-to-seed mizuna. There was the sound of building work near the new pumping station;, a very slight drone from the main road; an intermittent drilling which was, I think, a woodpecker; a blackbird starting that late afternoon singing; and could that possibly have been the sound of rooster nearby - really?

Where the Prescott Channel runs at the back of the plot opposite, some swans flew across a couple of times, quite low down, following the water and just in view, then some wildfowl and a few gulls. At one point there were even three ducks in a row using the sky and trees as their wallpaper. Great tits flew around making that repetitive tweeting and the silhouette of a wretched magpie was just about visible in a tree. 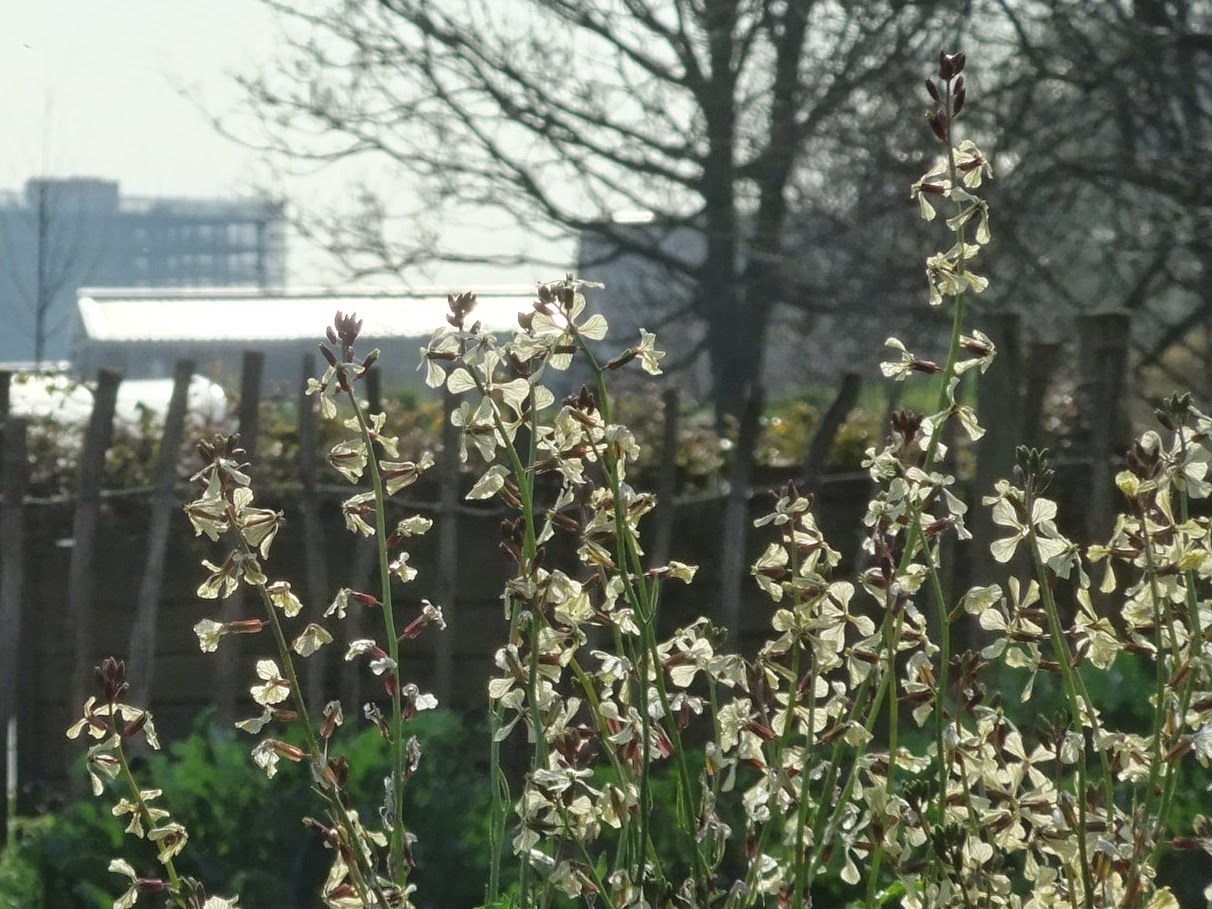 Such bliss. Inside my head I may have heard those Numskulls responsible for vitamin and endorphin distribution  calling out "More, more!".

Sounds just about perfect. I miss my old allotment so much when I read about yours!

Love your "bare-leg warm" description and surprised to see oast houses in London.

I too have been taking pictures of gone-to-seed plants up at the allotment. Pretty aren't they?

It is good to sit and do nothing sometimes and isn't it amazing the amount of wildlife that can be seen/heard even in the middle of a city.

It's quite amazing that you can see and hear all of that in the middle of the city. Best of all worlds! I always think of the Great Tit as the rusty spring bird.

I was recently watching a heron perched on the old Victorian factory buildings which run between the gardens in our street of Victorian terraces and the similar neighbouring street. Those buildings have been sold off to be flattened and the site redeveloped as a small housing development. So the heron will have to find a new place from which to ogle our neighbours carp filled pond. I welcome the development in that so much new housing is needed in London (I would like my children to have somewhere to move to, eventually!) but as you say the pace of change in East London is dizzying.

Those reflections are wonderful. Doing nothing isn't easy these days, is it, with the pull of the laptop and endless other distractions, but it's so peaceful to switch it all off and just be. (And who was it who said if you do nothing, nothing gets left unfinished?) Lots of change afoot in these parts, too.

That all sounds wonderfully restorative and it would have been a shame not have enjoyed such a lovely day .
I heard a cockoo yesterday and finally believe that summer will come at some stage ...

I seem to remember that you had an involvement (as a judge?) with the Olympic Great British Garden competition. Just to say that I was there at dusk last night and it is currently a lovely quiet place to spend time and enjoy the spring bulbs.

You've reminded me that I don't sit and do nothing often enough. And you've also reminded me that the little people in my head are called Numskulls ... I loved those comic strips as a child but had somehow forgotten what they were called.

I've been spending more time in east London recently and especially just across the road from Three Mills, so walking along the waterways is a weekend treat. It has a lot more urban dereliction than my own manor, so I'm getting quite fond of it!