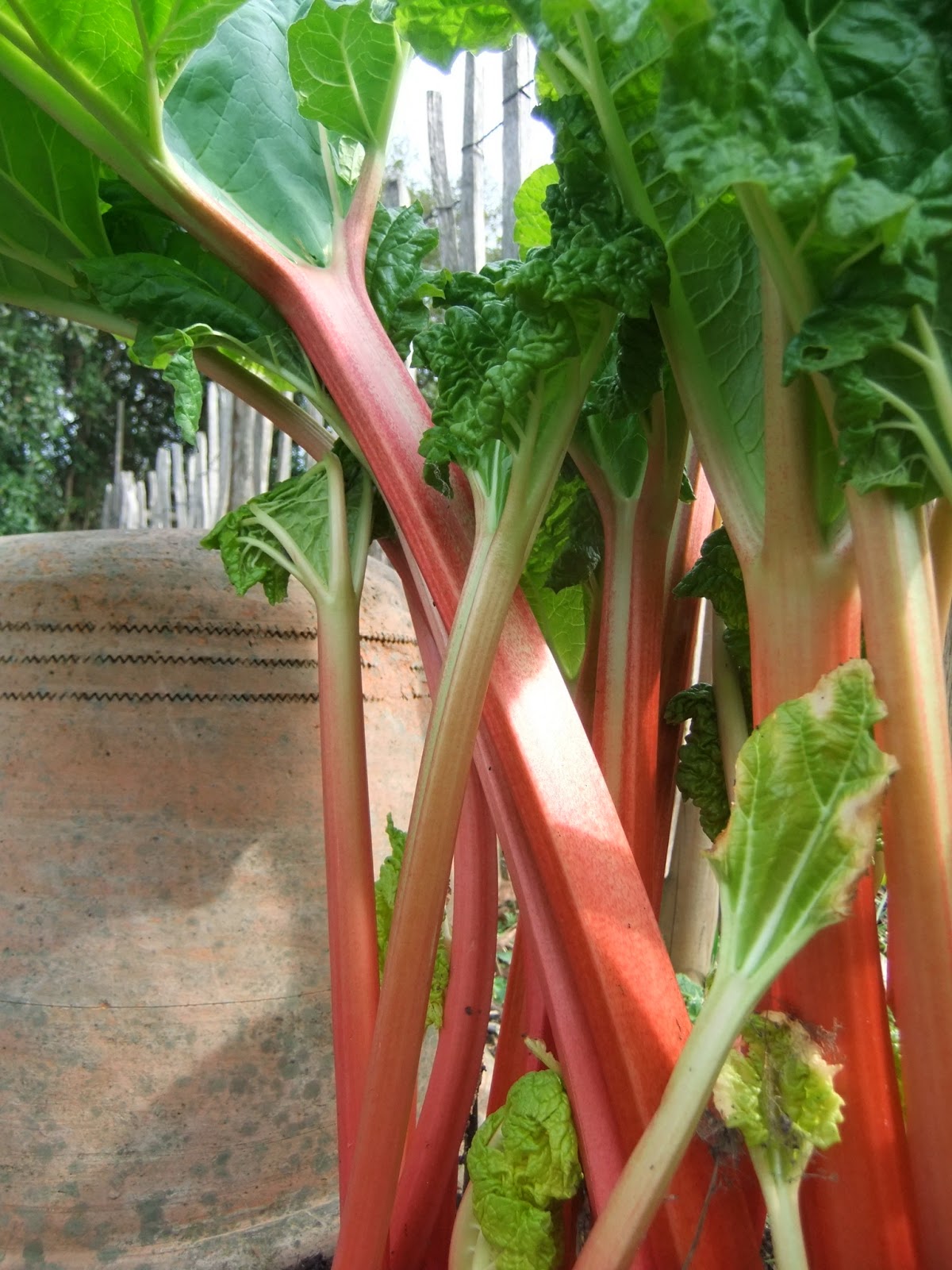 I have been sitting, kneeling, scribbling, here this afternoon and in between doing things I have made a commitment to do, albeit in one case rather late, I have been pondering the difference between plenty and enough. Take a particular writing commitment I have each month: enough time, insufficient motivation equals plenty of guilt. Or in the case of rhubarb, I have enough to make an early spring crumble, and possibly a cake, but it's too early to be plentiful yet, at least until the other crowns start coming through. 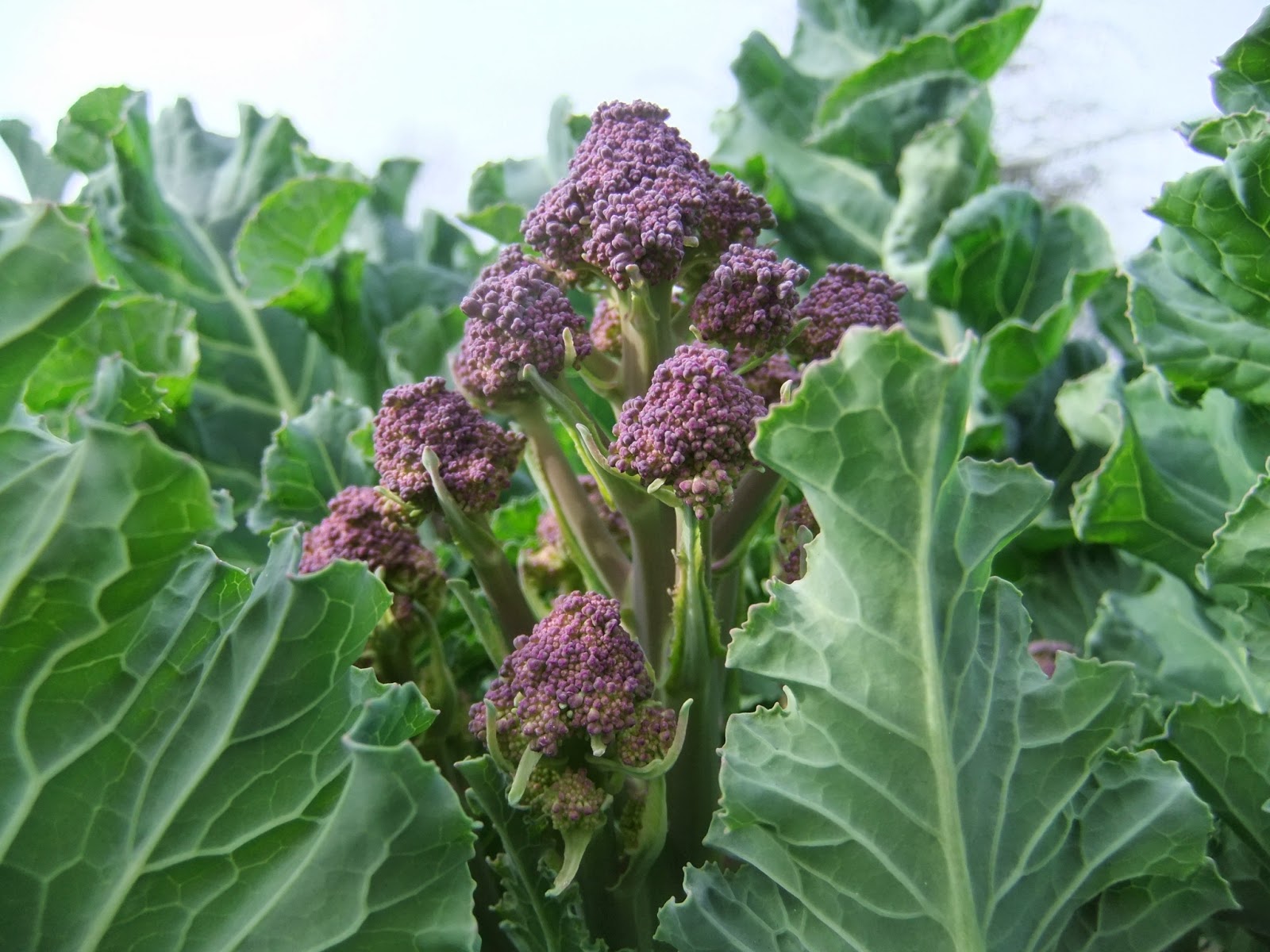 The purple sprouting broccolli is quite another matter. When I took this photo around ten days ago, delighted by its pertness and the prettiness of purple against the green, there was only just enough for two, and even then I felt a twinge at despoiling its beauty. Early this Sunday morning however when I cycled down to the plot before anyone else had woken up, more plants had sprouted and there was enough for a meal for five together with a salad of endive, rocket, red mustard and young beetroot leaves; leeks, potatoes; all homegrown. There was enough for everyone, plates were cleaned, everything eaten. It really was most pleasing, this sense of plenty.

That thinking time this afternoon helped me to sort out some of the feelings I'd been having about a family wedding this weekend. I'd decided I wanted to make my own dress - I have more than enough fabric stashed away over years and I'm determined to use some of it up before I even think about adding to the pile. But of course, once you have a new dress, there's all that other stuff - shoes, handbags (hate them), hats (ooh, love 'em). So I mooched around, picked stuff up, put it down, wondered whether I was just being mean, came home with some shoes, kept them in the box so I could take them back if I had to. And of course the dress was fine, the new shoes were an extravagance I could have done without but they rather brightened things up. And after all, who cares when the bride is so beautiful that she makes your heart beat faster and tears rise, when the sun slants through the church windows at such an angle that she sits glimmering in a pool of light, when you get to ride on an old Routemaster to the reception on a warm afternoon in the middle of London on the Ides of March and drink fizzy stuff outside until you're fuzzy.

It was all more than enough, more even than plenty.
at 18:10

That meal sounds absolutely wonderful.It seems a considerable achievement, having such plentiful food growing at this time of year.

Bloody hell I'm jealous!
Our garden is having a weird Winter involving thaws and freezes and after thick ice we now have about a foot of fresh snow! ...my Rhubarb is not due to wake up until May and everything else must wait too...
wanders off muttering ....Must be patient ..must be patient

Ladies - I think it is all more luck than judgement. I don't think we have had a single frost in London so far this year, so the salad greens have flourished, and the brassica plant went in late and was all muddled so I was never quite sure what I was going to get. I am immensely grateful for the plenitude

Oh I think there was quite bit of Judgement and hard work in there too :0)
The Wedding sounds really lovely isn't it nice to be part of a very special moment ! (and an occasional something new is fun isn't it :0))

Can't help but think let us have a glimpse of the wedding especially new shoes and dress. New shoes for a special occasion are wonderful, every time you wear them you'll remember when/why you brought them. (That's the nosy side of me mind)

That's a lot of rhubarb, I'm thinking - mine is tiny and weedy, and I mourn the loss of my enormous rhubarb patch, left behind in the North East....

The wedding sounds beautiful! Show us your dress, go on......

Oh I will show the dress because I want to talk a bit about the pattern and what I learnt. But as usual, can you believe it, I went to the wedding without a camera. The Brother In Law has a snap - I'll get him to download for me.

It's good to be back with some time for the blog again!

Plenty of lovelies in this post. Look forward to seeing pictures of your dress. (I want to get back into sewing but there are no fabric shops in these parts). Also hoping there's enough rice in the cupboard here to make the planned risotto tonight.

How wonderful to feed everyone on only food you have grown yourself!

And the wedding sounds marvellous.

I hear you on the difference between plenty and enough, but don't you think it's as much a state of mind as it is anything else?