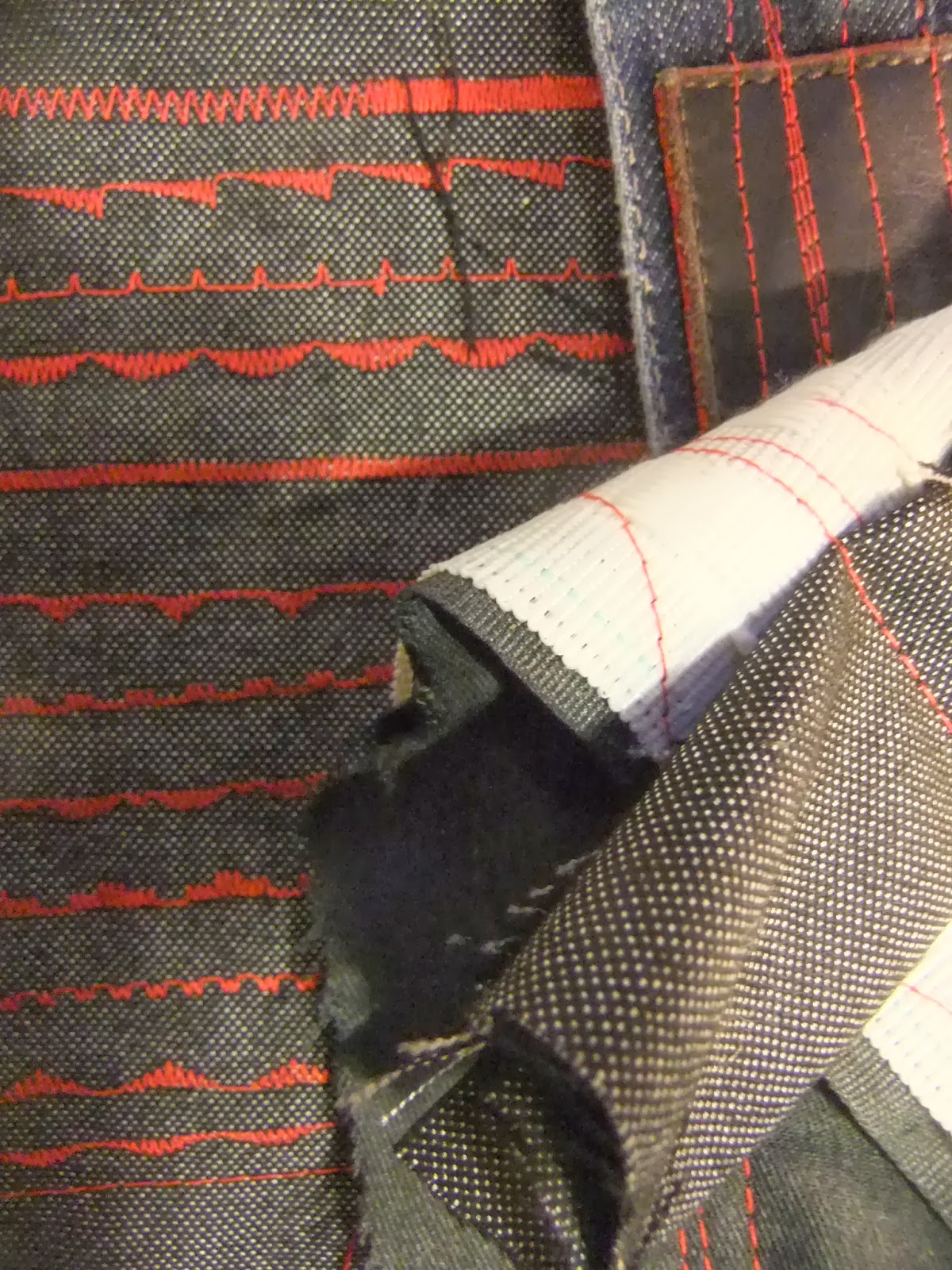 There is no typical Saturday here. It all depends on the weather, and whether all the things that should have been done during the week have been done. There was something that was on my mind today though. I'd popped in to Sew Amazing during the week to buy sewing essentials - pins, some tweezers and a little thingy to make threading an overlocker easier after an hour and a half of exasperation remedied, successfully, by making a threader from some 5 amp fuse wire I found in the cellar. Now, I like to go in to Sew Amazing. All those rows of haberdashery kit - needles and studs and tailors chalk. And Rob, the man himself, he who can caress sewing machines into action. We have conversations about them - missing screws, bastardised Berninas, the history of the Juki... and the family's new poodle puppy. Around about chucking out time at the local primary school, the shop fills up - Have you got any pink felt? Do you mend Brother machines? Can I pay for these needles? And while Rob is dealing with the hubbub, I take a look at the shelves of second hand sewing machines like I always do. And that's where I develop a crush on a little 60's model - all metal and wood and touches of chrome.  The instruction booklet is pristine, all the feet tucked into the side drawer, a little plastic pouch for the embroidery cams. But the last thing I need is another sewing machine. I mean, that lovely little electric 1930s Singer that I saw in Herne Bay a couple of months back that smelt so evocatively of machine oil and lint, well, I managed to leave that behind didn't I? I've already got one, or two. So I admired the pictures of the pretty little poodle, said cheerio, and went home to make tea.

Back to Saturday. Wind and rain promised. We need to go to get the potatoes from the allotment shed. But I've been thinking about that little machine so we go up to the market, but Rob's is shut. An hour or so later we are back again. This time I try out the machine with Rob urging me on -"Go on, sew over that denim and leather and treble layer of fabric, pretend you're jumping over the hurdles. Lovely machine, isn't it?" I'm sold, and so is the machine. 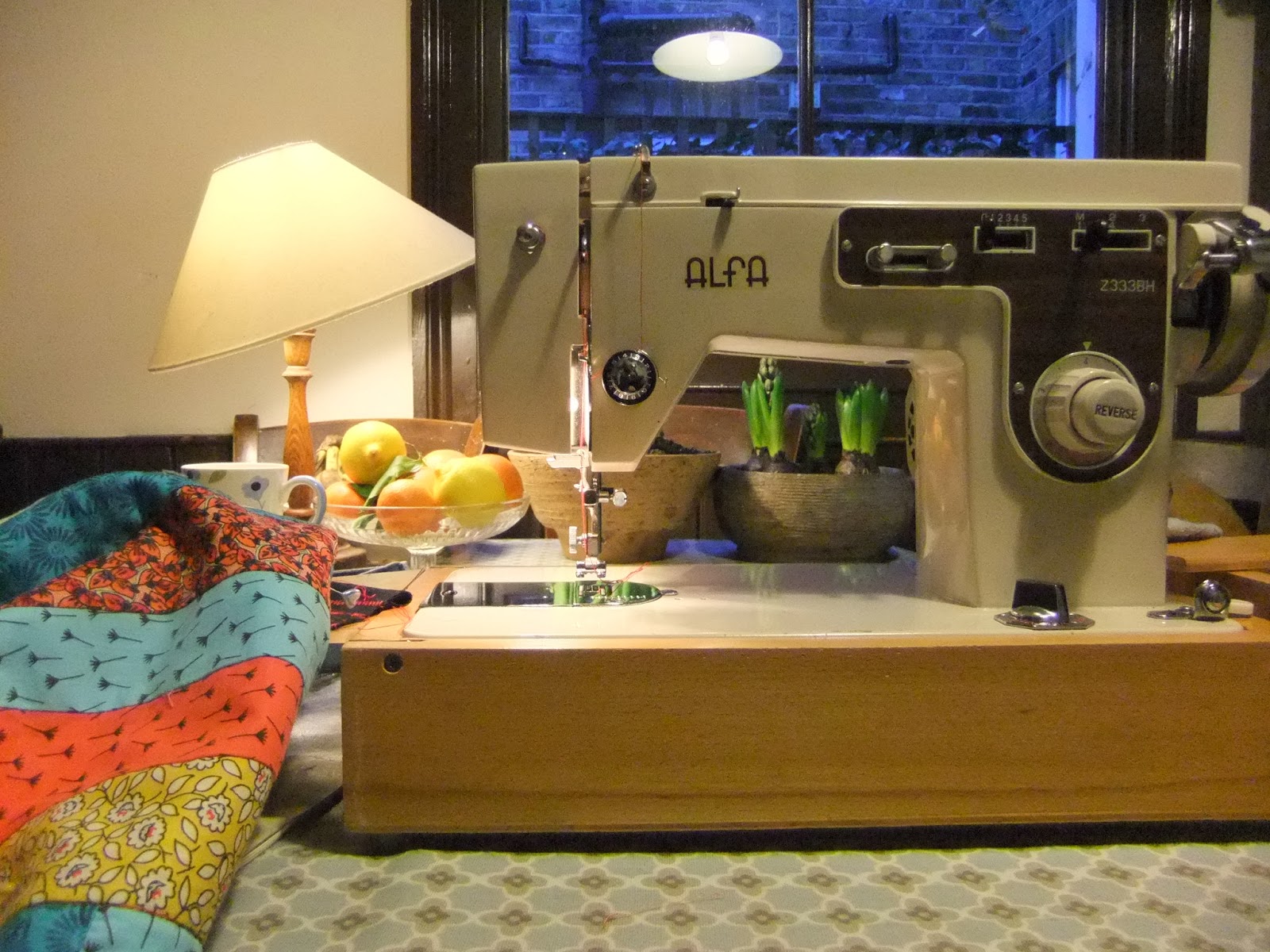 Saturday becomes a stay at home day for me, spent in the kitchen, quilting something that should have been tackled ages ago. The machine jumps the hurdles as easy as anything.

This Alfa, this Romeo to my Juliet (what?for goodness sake!) weighs a ton, everything else feels lighter, brighter. It could be love.

oh, it's beautiful! She needed a good home - you were clearly meant to be together :)

I did wonder where you were going with that post title! They don't make them like they used to?

Gorgeous!
Mine is about the same era, inherited from my mother. Swiss, hardly ever gone wrong and when it does you can even still get parts for it from specialist retailers.
Have fun.

I love a happy ending.

Lovely. I hope you have many happy hours together!

I love it! My sewing machine weighs a ton, but to me that makes it solid and trustworthy. It brings out the Luddite in me!

Such lovely, lovely writing. You and alfa sound like a match made in heaven!

Just think what lovely vintage-inspired things you can make with that little machine!

Just in time for Valentine's day :0)

Sometimes, some things are just meant to be. You can't argue with Alfa fate.