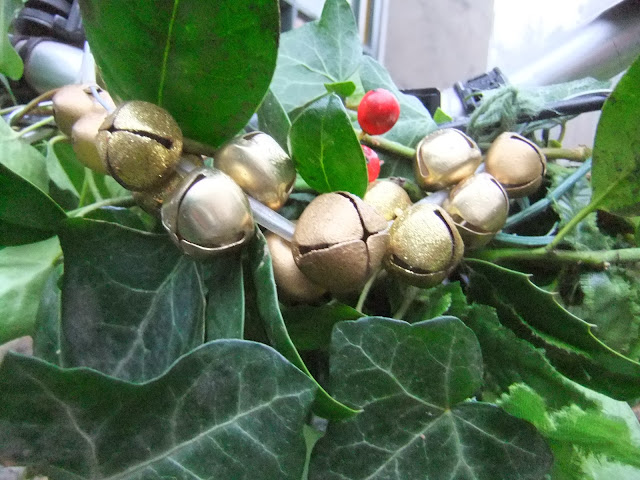 Normally the handlebars of my bicycle are decked with fake flowers, supposedly to deter any potential  - default male - thieves who might balk at the prospect of cycling on a hippy-looking bike. That's the theory at least. After a couple of years out in all weathers, those flowers were looking a little sad, even after I washed them so, with a snip here and there in the garden, they were soon replaced with something a little more seasonal. But you know how is it once you start with a bit of embellishment...where to stop?

I'm hoping that the bells will act as a gentle warning to strollers on the towpath, my routeway to all three points of the compass from here. The tinkle they make on the uneven path is really rather nice, just a suggestion that something is approaching rather than a commanding ring. I suppose it's possible that some people might think that they are suffering from auditory hallucinations but that's no bad thing if it makes them slow down for a moment or two.

So there you are - triple helpings today. Singles tomorrow.
at 23:53

Love the idea of a jingle bells decorated bike ..fun and festive
We jingle in Summer here ..but that is Bear Bells of the "I coming along please avoid me" variety

Fantastic idea. I now have a lovely image in my mind of you pedalling along on your very festive bike!

I love those bells and yes, that pot of chillies over at mine would look very good in your basket :)