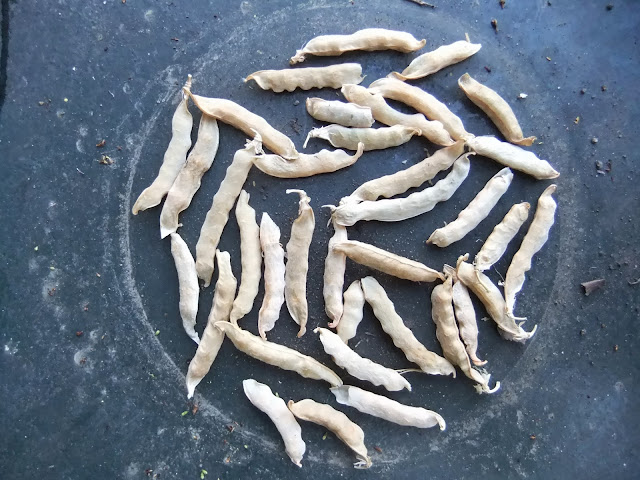 Today we have a promise hidden within the calendar, and unusal one. If you think an image of some dried pea pods is an odd one to describe a promise, you might soon understand.

Joanna Dobson has always struck me as a woman of integrity and honesty, and I've been reading her blog for several years now, and over the last wee while, she has written more and more about her interest in the story of Incredible Edible Todmorden - the town that has been learning how to feed itself. Joanna's interest has gradually developed into a much more serious commitment - a full blown project, launched on Kickstarter, a crowd funding site, to raise the funding to publish a book about the story of Todmorden to encourage others to  think about doing something similar.

This is what Joanna says about the project. "Incredible! Plant Veg, Grow a Revolution is the story of Incredible Edible Todmorden, the extraordinary local food movement that has become a worldwide phenomenon. I wrote Incredible! in collaboration with the movement’s co-founder, Pam Warhurst, in whose voice the book is told. From ‘propaganda planting’ in cemeteries and on station platforms, to a Green Route that has transformed the look and feel of a Yorkshire mill town and a global network that is helping to change the way we think about the future, the Incredible Edible movement is rippling out across the world. Over two years I have interviewed a whole range of people whose lives have been changed by Incredible Edible, from another co-founder Mary Clear, who ripped out all the roses in her front garden and replaced them with vegetables and a sign saying ‘Help Yourself’, to the farmer who credits with movement with boosting sales of his award-winning cheeses, and the high school student who thought his destiny was a dead end job until he became a student director of the project and realised that was a lie (he’s now at university). Woven into the story are facts and figures about our broken food system and illustrations of how it could change to give all of us a better future."

I'd never heard of Kickstarter until recently but I did understand the whole concept of crowd funding. I very much like the idea of a crowd of people risking a small contribution to help tp realise a project they believe in. It is really exciting to see that  Joanna is so very close to the £10000 target that can make the promise of publication a reality. When I checked earlier she was within £750 of her target. With just 3 days to go, she needs just a little bit of help. Worth thinking about or maybe even foregoing a glass of wine or a couple of cups of coffee*and pledging a fiver.

•Incredible, but that's how much you'll pay in the pubs or cafes round here. Not me, because I'm very mean so I have made a pledge to Joanna instead.

I used to spend a lot of time in Todmorden in the 1990s when living in Manchester and keen on hillwalking. The Stoodley Pike monument overlooking the town is a particularly fine place to walk. Glad to see Pam made her target. We have a serious kickstarter (and spacehive) habit in this household as for teenagers its a way of pledging to get games/electronic gizmos developed. There is a really good kickstarter appeal at the moment for a Maker Space which is being developed by a young man, Tom Clowney, in Leyton who is eager to provide a home for his late father's tools and a place where people can get use out of them.

They've made their target - hurrah :)