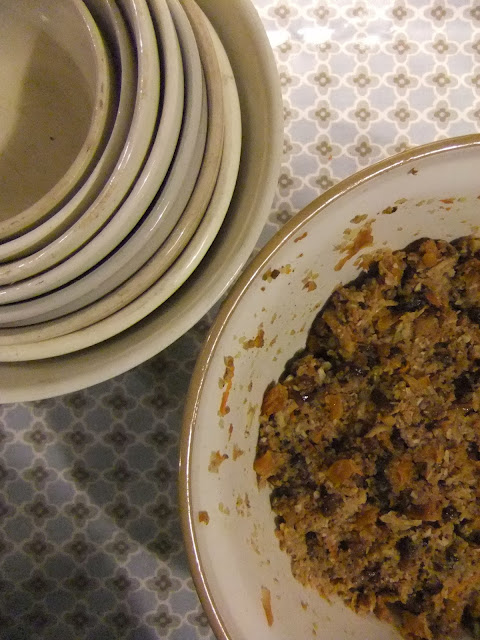 We've been here many times before, only it seems later and later each year, not that our enthusiasm for Christmas pudding has diminished in any way, just that it seems to take longer each year to get into the swing of the season. Same recipe, no half measures, a three pint pudding bowl, hours of boiling - that rumbling on the cooker, such a purposeful domestic sound. And when all is done, the pleasure of leftover pudding for breakfast on Boxing Day to look forward to. So satisfying.


(Thanks to Jess from Knitting on Trains for her recent giveaway of a gift from Neat Eats which I won. No prize for guessing what I chose.)
at 00:13

I wish my computer screen was scratch and sniff ...that looks sooo yummy!

Christmas pudding bubbling on the stove - such a cosy image!

The aroma in your kitchen must have been glorious.

I love your advent calendars; the WI; the puddings; the chance encounters; the panto... all just gorgeous and all very YOU. Gorgeous.

It's thanks to you I've discovered the joy of leftover Christmas pudding for breakfast. When I think of all those pudding remains which ended up in bin............

My daughter was terrified that I would leave the house during the 8 hours that the pudding was steaming while she was at school, even just to nip to the corner shop. She feared there would be a terrible conflagration. It was like a day under house arrest.

Glad you liked it :) And what an apt choice for this time of year!