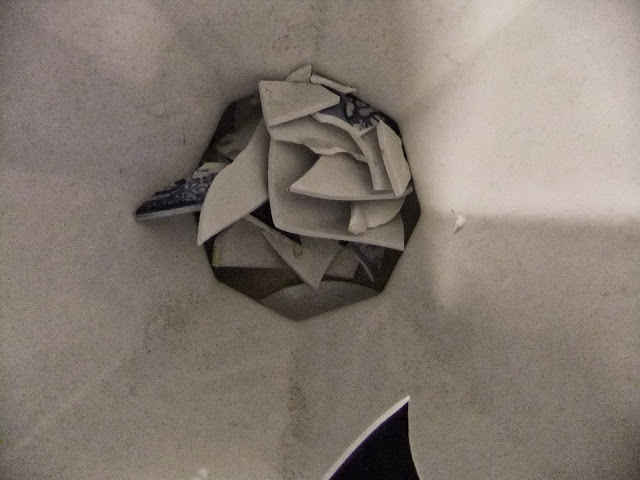 I don't know what I was thinking of, using a huge piece of heavy wood as a yardstick. It caught the corner of one of a pair of ginger jars that have been sitting one or other of our mantelpieces for about thirty years. It tumbled down, caught the edge of the table and shattered into pieces. Ironically, some of the shards ended up in a dish of pottery pieces I had collected from the Thames shoreline.  It is probably beyond repair but somehow I can't bring myself to throw the pieces away. Coincidentally, I had heard Grayson Perry speaking earlier that day about a jar that he had smashed deliberately with the intention of having craftsmen restoring it with gold. I wish I could do the same, if only to say sorry, for this was his jar, not mine.

Accidents often happen when you are tired, and I think that one of the reasons for my clumsiness was being a little bit shattered myself. Autumn has brought more commitments than might be sensible - some volunteering activity demanding a couple of days a week just now, organising the local WI, a sewing class where I've taken on rather an ambitious  and no doubt lengthy project, more yoga. Oh, yeah,  I have a family and home too which need some attention - Mrs Jellaby and the child with its head stuck in the railings often comes to mind. Not that there are small children around any more, but an aging parent has to be watched carefully too.

I started to write this earlier today and since then have managed to fit in some soothing activities: a cafe, the market, some baking, some fairy tales and forests, and a bit of a snooze. The world is looking a little less jagged. And it's Apple Day tomorrow at Brogdale. Hope you manage to celebrate too.

Following all your links ... well I'm not surprised you're shattered, though it all looks amazing. I'm sad for your shattered ginger jar though.

Commiserations on the Jar...being tired does make for not the most deft handling of tasks...darn it.

Brogdale..gosh my brother worked there long ago..and when I lived in the UK I loved to go to old orchards on Apple day ..happy memories :0)

Even if you are not materialistic, it's awful when you break something that has been part of your history. It upsets the equalibirium and the fabric of your routine for a while. Frazzled is a word that comes to mind, when you are so tired you speed up to get everything done, so you can rest, only to become more accident prone. I know exactly what you mean, hope the nap helped!

I'm trying (trying!) not to mind when things get broken. We have accumulated so many memory-related objects over the years it was turning into a trauma when anything got broken. We were saving the shards and cupboards were filling with them. I'm now keen to use the things we have preserved so carefully and to throw them away if they break.
Your picture is beautiful though. I'm not sure I could see the potential for beauty or art in the things I break. I think if I stopped to examine them I would get distressed after all.
Ploughing on with blinkers - maybe that should be my next motto.

I would definitely keep the broken pieces as you could end up with something wonderful with them embedded into it for ever. One of us broke a precious dish of mine recently and the worst aspect of it was that they didn't keep the pieces for me -- it was entirely gone by the time I got home from work. You could use your shards on a memory jar...

Very sorry to hear about your jar.It's always sad when something precious gets broken.You certainly sound busy and that jacket looks like a very impressive project.

You are certainly taking on some challenges!
Breaking things is always sad - but you have the other jar. Place it more centrally on your shelf and you can throw the shards away.

Is it just autumn that does this to us? Perhaps. There were some amazing broken-pottery pieces at the Kaffe Fasset exhibition - wonderful mosaics reconstituted with shards of once-lovely tea pots, edges of glass tiles, gilded cake plates. Perhaps your ginger jar is destined for something else. x