there was a birthday 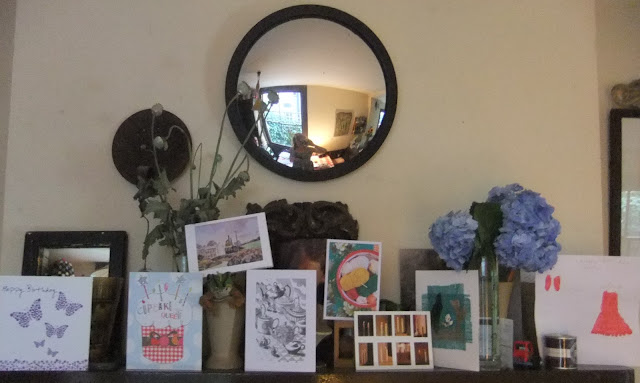 Back a bit now, there was a birthday. Now, we don't do birthdays in a big way, but I very much enjoy birthday cards, the choices that people make, that confluence of what they like and what they think you would like too - a bit of nature, some baking, rural scenes, a bowl of knitting (this accompanied by some felted stones!), scraps of seaweed, candles, and a beautifully coloured-in ballet "dress" and "shoes",  in what looks to me like red, but which I was assured were pink. This last was accompanied by a sprig of blue hydrangea blossoms which was proferred with more thoughtfulness than a six-year old might be expected to express (I chose blue for you. Which do you like best - these or the sunflowers that mummy bought for you? My heart creaked, my throat tightened. It remains so.)

There is a card missing. My friend always manages to find a card of women at the seaside. This time she actually found one of two women with the same colour hair as ours. And that is how we actually spent the day. I wore THE DRESS, the one that took thirty hours to make, the one I promised to show, the one I wore to the wedding party with ancient yellow patent shoes and a yellow flower pinned in my updo, on the day I forgot to take my camera.  Here it is. You've seen the front already and that's enough of that. 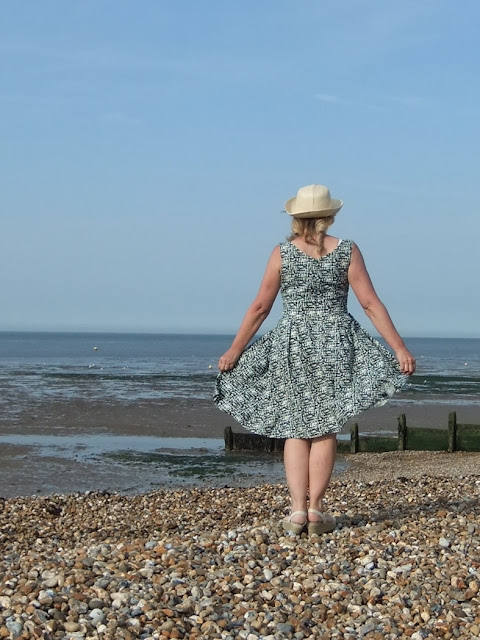 Now, the observant among you may notice that there is a pretty little Edward Bawden drawing of teapots on that mantelpiece. Inside is a message which reads "NO MORE TEAPOTS". 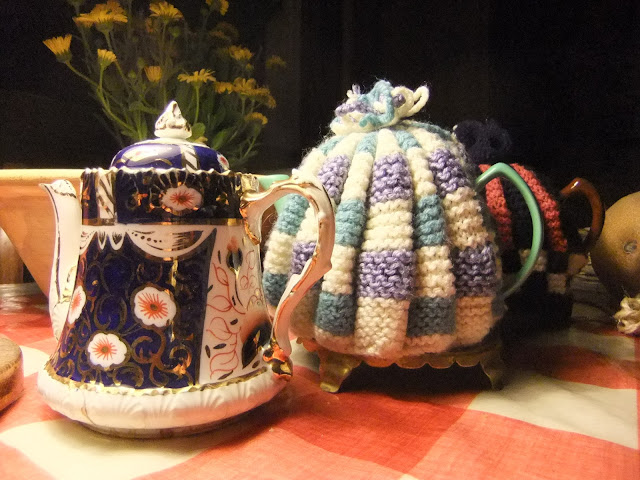 Such an  instruction, Dear Reader, is as a red rag to a bull. I saw it in Deptford High Street priced at £2.25. It leaks, as I knew it would, but I could not care less. 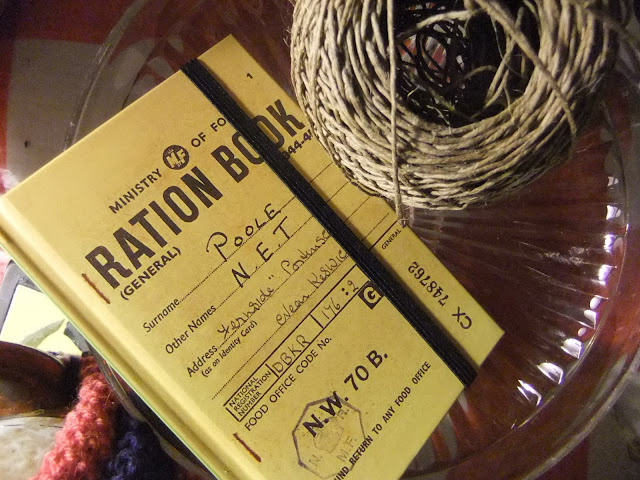 It is the perfect partner for the other gifts. No expense spared in this house.

Email ThisBlogThis!Share to TwitterShare to FacebookShare to Pinterest
Labels: dress-up, getting older, love, seaside, too much stuff

Happy birthday for back a bit! I quite agree that 'no more teapots' would be a provocation to add to the collection. Didn't you do a tailoring class for the dress? I recall reading about it and meant to ask you your opinion of the class and where it was - I'd be interested in doing something like that myself.

Very funny story regarding the teapot. Mine might read no more scarves, tablecloths, brooches or toot in general!

Looks like perfection to me, every last bit of it. Speaking of books (elsewhere), Persephone Books is to reissue Rumer Godden.

That teapot isn't , in any way , an indulgence . It's a Good Deed ... you're offering it shelter .
Love the frock ! And yellow shoes sound perfect .

Belated birthday greetings (there was cake, yes?) and well done with the dress, it's lovely. Your (I'm assuming)niece's question reminds me of a similar one from a five year old Girlie to the mister when her brother was just a couple of days old - who do you love most, me or the baby?
Such a valiant attempt to halt teapot population growth at yours. Aww, bless.

How could anyone stop acquiring teapots, aren't they among the most necessary of things?!

The dress is amazing, well worth the time you put in.
And the teapot is too pretty not to buy. It's a lady thing maybe.