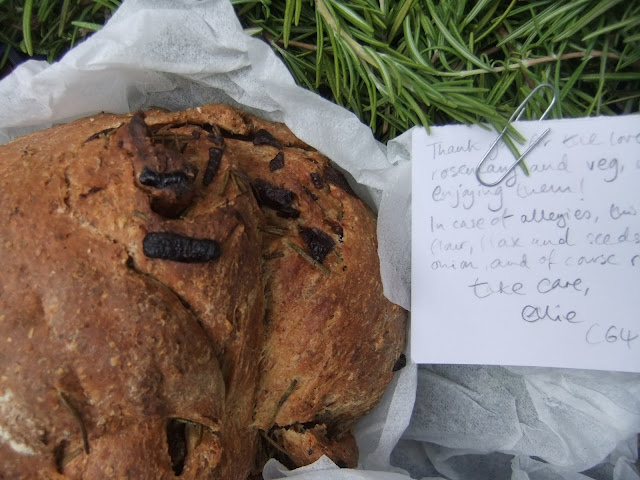 In one of his books, John Paul Flintoff describes how when he had a surplus of tomato seedlings, he and his daughter went down the street knocking at neighbours' houses to share the spares. This little story has always stuck in my mind as it seems such a perfect way of meeting people who live nearby but with whom you have never struck up a conversation. Now since we moved into our house the number of homes has at least doubled. A car alarm workshop was converted into a studio, the studio later split to add a flat, the yard across the road rebuilt to accommodate four new houses, the cosmetics warehouse pulled down so that eleven flats and houses could be squeezed tardis-like into the space. We scarcely see anyone from these new buildings because they are built behind security gates.  Knocking on doors to share surplus produce face to face with these unknown neighbours is well nigh impossible. So when we trimmed our rosemary bushes and had masses of sprigs of rosemary, I decided to make them up into bunches and hung them on the railings with a sign asking people to help themselves. Over the course of the day at least half of them disappeared. When I went out to bring them in later that night, a young woman and her friend called out to thank me from across the road. She was going to make rosemary bread, she said. Then this morning when I popped out to shake out the mats there, hanging on the railings, was a cloth bag and inside it a loaf and a note from Ellie.

I like to think that isn't the end of the story but the beginning.

What a very lovely story!

Very sweet. The world needs more of this kind of selfless sharing/connecting with strangers!

Fantastic. The bread looks delicious too.

Nice, especially nice to have the gift returned twofold!

I find the rise in the gating of private property in the UK really disturbing. How heartening to think of those barriers being broken down with bread and herbs!

Lovely! I didn't realize that London was becoming a gated community. Yikes.

Good neighbours are worth their weight in gold.

I think that has made my day, seeing neighbourliness burst out by a gated community. Well done you and well done Ellie. Oh the power of food!

I love tales like this, it's just how I like to live. The bread looks amazing as well.

What a lovely, heartwarming story! Keep us posted - I think you're right, and there is more to come, with time.

That is just fabulous and such a simple idea :)

And it neatly shows, that whatever you do, be it good or bad, it comes back to you doubled at least.

I am about to trim my little rosemary hedge that borders the new dye garden, but I know that if I were to offer the surplus to my neighbours most wouldn't want it, or possibly even have a clue what to do with it. Sometimes living in the country isn't all it's cracked up to be!

Oops, I just hit publish too soon ... I was going to add both that rosemary makes a great natural dye, and also that I do hope your lovely story is just a beginning :)

That does sound like a very lovely way to begin to make contacts with your neighbours. Last year our road was on the route of the Olympic cycle race, and we organised a street party for our little row of 12 houses. We met people for the first time who had lived there for years, and last weekend someone hosted a bbq to welcome back a family who had moved out for a few months after a fire. Like you, I hope these connections are a beginning! Thanks for your comment on my blog about sewing classes btw, Morley College does look interesting!

What a charming story and a lovely way to make new friends. I hope good things grow from your kind thought