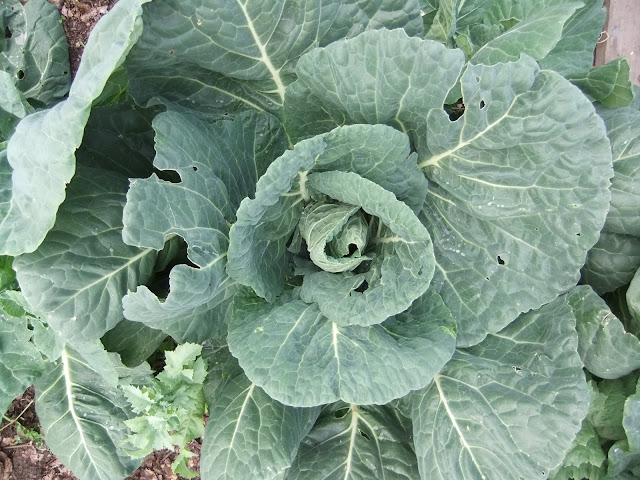 My spring cabbages - note the word "spring"and try not to snigger - are not showing much inclination to heart up. Beautiful though they are, and I do so like their crinkly leaves and stalwart nature, at the moment they are completely overcrowding my shallots and tomatoes, and let's face it, those just can't be doing with being bullied after the sad start they've had this year. As I've been trying to eat more healthily and make better use of everything on the allotment, I've been searching for recipes that might allow me to harvest the outer leaves, while still leaving the plant in situ in case, just in case, they do fill out. I flicked through a book I don't really use often enough, Sarah Raven's Garden Cookbook, and found the perfect solution, a risotto of spring greens. Doesn't excite you? I suggest you give it a try. Ours was both pretty and delicious. What's more, it actually feels as if it is doing you good. And that can't be a bad thing, surely, when you have given up beer and wine in an attempt to identify exactly what it is that is making you feel rubbish when you wake up in the morning?

Risotto is a doddle.  The only ingredient that changes is the vegetable. I don't use butter - this is meant to be a healthy dish.  Homemade stock if available, and a glass of cheap vermouth make up the liquid element. And depending on the vegetable, I often add the juice of half a lemon to give the ristotto a bit of bite. So really this is more of a Sarah Raven inspired risotto.

A Risotto of Spring Greens

A glug of olive oil
A large onion
Some garlic cloves and half a red chilli, chopped finely
250g arborio rice
Salt and pepper
180g of finely sliced spring cabbage leaves, blanched for 2/3 minutes (I use a blast of the microwave)
A wine glass of white vermouth or wine, topped up with water if nec.
About 750 ml of stock, brought to the boil in a separate pan
Parmesan to taste
Juice of half a lemon

You probably know how to make risotto already, but just in case: start off by gently sauteing the onion, garlic and chilli in the oil until the onion is translucent.  Add the rice until covered in oil and swirl around until well covered in oil, then add greens and seasoning followed by the vermouth/wine*.  The trick then is to let the alcohol evaporate, and then add the hot stock a little at a time until the rice is plump and but not too soft and there is a very slight slooshiness to the risotto ( this liquid disappears in the hot pan I find).  Add parmesan and lemon juice to taste and serve.

* Raven only adds half here, and adds the remainder at the end.  I'll have to try that one day.

While I'm waxing on about food, a quick word about the food swap at our WI meeting last week. When one of our foodie members suggested the swap having read about it online, I was a bit sceptical about whether we could pull it off.  But we did, albeit in a simplified fashion, and lots of people made the effort to bring in home grown or home made food and preserves. Since then we've feasted here on  home made tomato ketchup and mayo, and have given as gifts  bartered coconut madeira cake and Irish tea loaf.  I was in two minds about a lentil salad I took in exchange for a jar of jam, but just like it said on the box, it was the best lentil salad ever and an introduction to a new food blog too.

I'm still on the look out for healthy recipes for greens and I'm about to have a glut of lettuces if the temperature goes up today as forecast. Any advice gratefully received.

I use the outer leaves of cabbages in stir-fries, the flavour really seems to sit well with sesame too.

Your last post was inspiring, so many folk gardening succesfully in places that hardly look as if they'd support gardens at all!

I love risotto, it is such a simple dish and can be made with the bare minimum of ingredients. I also love spring greens so I think I'll give this a whirl. I agree that homemade stock makes all the difference, but I always sneak a bit of butter in with my olive oil ;-)

Sounds delish. Like Annie, I use shredded cabbage leaves in stir fries and I love kale crisps. I also like to make stuffed cabbage leaves. There are lots of recipes out there but if you like coconut you might fancy trying this one:

Or if you prefer a tomato base, there's this one:

Then there are lettuce wraps which I first tried in a restaurant in Vegas and managed to recreate at home. Very yummy.

I love the idea of a food swap. I suppose it happens to a small extent on the allotment, with people giving away surplus crops etc, but your W.I. swap sounded great.
Lettuce are good cooked ( you probably know this!) with peas in slightly thickened chicken stock.

I love Sara Raven's recipes!. We have having the devil of a time with our root vegetables. All tops and no roots.

Thank you all so much for the hints and tips - so kind.

I'll definitely try the stuffed cabbage leaves and stir fry is always a good staple. I've never tried cooked lettuce leaves , it never sounded quite right to me, but there's something about a personal recommendation as opposed to Hugh F-W that really does make it more appealing.

I was going to suggest stuffed leaves as well, add some pine nuts for a really lovely combo. I prefer the outer leaves of cabbage (especially savoy) as I think they have more taste.

I do like risotto, but never seem to find one that doesn't add alcohol of some kind. In a teetotal household, I often struggle with recipes where alcohol seems to be a given. The addition of extra stock does seem to give a somewhat same-y flavour - any suggestions out there?

Rachel - how about replacing the wine with some diluted lemon juice and reducing any lemon juice added at the end?

Just a suggestion for Rachel - ginger beer. Especially good in a mushroom risotto.

I've used cabbage leaves as a substitute for pasta sheets when wanting a carb free lasagne.