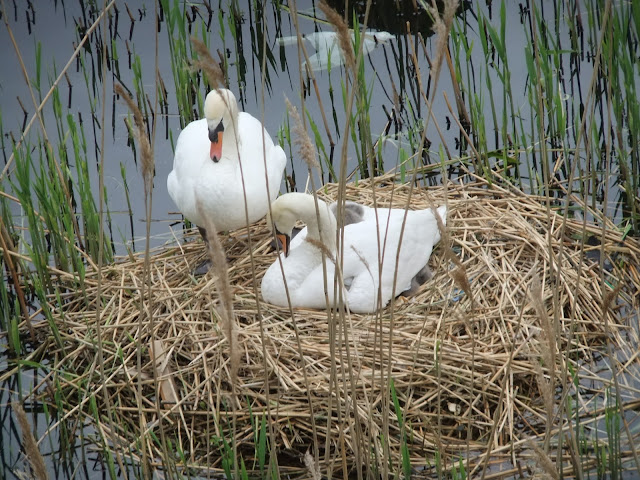 They're here, the cygnets.  My friend texted earlier in the week to say she'd seen them.  She thought there were five but it's hard to tell.  You can just about see one on her back, and several tucked under her wing. Stop on the bridge and look and you are bound to get into conversation with someone else who has been waiting for their arrival. Children stop on their way home from school - or out on nature study, mothers with bags of shopping point them out to their babies, cyclists and passers by along the other bank slow down to take a peek . It's rather amazing to think that we're all connected by a pile of reeds and plastic bags, two swans and those six eggs.  Now you are too, I suppose.
at 20:31

Wonderful. And yes, I do fell connected to all those who marvel at this :)

Five! Please may they all survive.... Keep us posted, won't you!

Awww, bless. The first sign of summer, as they say. Fingers crossed they do well.

I love the cygnets.

Last year all our walks into Reading town centre were dominated by concerns over a hapless pair of swans and their nest which was destroyed twice by storms, with two eggs lost and never seen hatched. We worried about those swans. This year we have only seen successful pairs with their nests built up high and proud out of the water, and bristling little tribes of new grey birds and warrior like parents striding forth ready to strike at any assailant.

Your swans look competent and well and I can quite believe the whole neighbourhood has become invested in their survival and health! How lovely they look and thank you for sharing them here so that we can also care about the future of this lovely little family of birds!