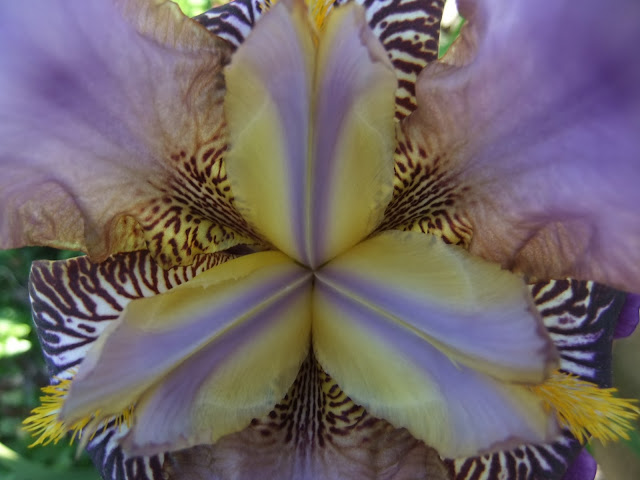 It was while we were sitting in the sun that John mentioned that one of the lovely things about the bearded iris was how it could be passed from generation to generation.  This one, he said, had come from his grandfather's garden.  A clump went first to "number 28", the house he lived in.  His mother liked a garden but was no gardener herself, so it was probably granddad who planted it. Then, when his mother moved across the road, John made sure that some were transferred there. When he started gardening himself for a living, more clumps were dug up and taken to the schools he worked at - in Stepney and Millwall. One year there was such an excess that he dug some up and hung them in bags on our railings with a label asking people to help themselves - slowly over the course of a week they all disappeared. And now another generation is  flowering for the first time on the West Ham allotment blowsily blowing in the wind.

I hadn't really thought about it before. So exotic, such a journey, and surely more places to go yet.

What a lovely thought. Mum loved her garden and when she died,my sister and I took clumps from various plants in her garden for our own gardens,and in particular some of the primroses which she loved.We planted some on our parents' grave, I have some here, my sister has some in her garden and last year I took some down to the allotment!

I love the idea of a plant's family tree. Now I'm really wishing I had mementoes of previous gardens and plantings.

How lovely, I thought that they were notoriously difficult to grow (but perhaps it's just my bad luck?). Sounds a bit like Herman the German Friendship Cake or sourdough starter. A little goes a long way between friends. x