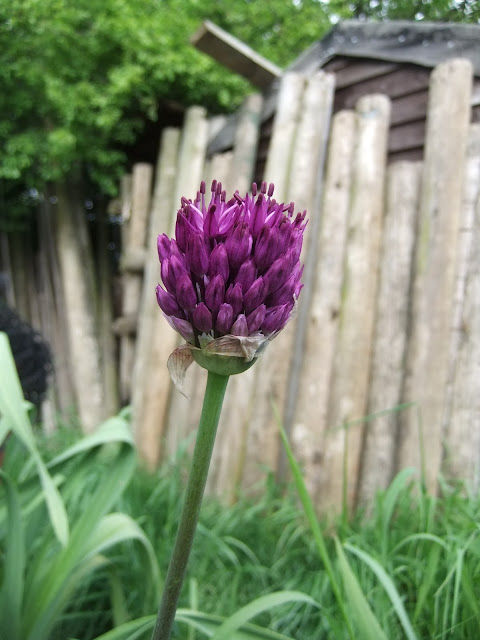 I read somewhere that children who are able to defer gratification are often found to be more socially mobile in later life, which might be taken as a proxy for "successful". Is the same true for gardeners do you think?  I'ver been pondering this as the spring weather has continued to perplex and vex me. With not a little caution, my tender tomato and courgette plants went out as soon as it seemed that the temperatures might be warm enough to sustain them, at least with a bit of evening cosseting until they hardened off a little. But as soon as they started to progress, the day time temperatures would fall and development would stall,  Tantalisingly, cucurbit seed leaves would open wide, only to get stuck like supplicants to some greater authority.  Seedlings were potted on, would grow a bit, then halt. Alliums would start to unfold, then think better of it.  Leek seeds, promisingly named and normally dependable, just never made an appearance at all.


None of this matters much I've decided. Firstly because I don't consider myself to be a gardener and success isn't that much of an issue. Indeed, one of the pleasures of growing vegetables is that, apart from a few permanent crops, the patchwork of a plot changes from year to year, perfect for lightweights like me; and for those who love the order of straight lines and grids, there is a great deal to be said for a line of pea sticks, catch crop lettuces, and tobleroned potatoes however long you have to wait.


Secondly, there are always - always - other pleasures: this year's frenzied bird activity; a female black cap gorging in the blossom before it disappeared, a robin singing for a solid hour waiting for the opportunity to pick over that space where the seeds have been hoed back; a pair of speckled woods twisting upwards.  Or the plants that just get on and do their own thing, when they're good and ready, or those that have stuck out the winter and will just seed themselves if you wait long enough.


And if you are really lucky and it rains most of the summer so the rhubarb can establish itself, and the leek moth can't take hold, and the asparagus beetle gets washed off, and whitefly finds it a little too windy or chilly, or whatever, then you can eat just-what-your-body-ordered purple sprouting broccoli everyday for a fortnight, give asparagus to your mates, plan to make fig and rhubarb jam, grill your leeks with peppers at £1 a giant bowl from the grocer on Bow Road.  It doesn't even seem to matter much that when you get home after a day when you seem to have spent most of the day planting or sowing or weeding with your arse in the air in Uttanasana and you feel fit for nothing more than a good scrub and something to drink.

I just may have said this every year since I started writing this blog.  Or I may just be feeling a little more philosophical about the small pleasures in life today.
at 14:16

I was going to say that it has been a funny old year for the garden but then I remembered saying that last year and possibly the one before. I share your philosophy, though. I delight in what grows and hope next year will be better for the crops that fail.
BTW, I always let some rocket go to seed for the beautiful flowers - lovely photo!

Small pleasures are the best kind . . .

Those of us who do not depend on our gardens / allotments in order to survive are able to share in these quiet pleasures. I'd be sad to miss them too. Re. deferred gratification - I sometimes wonder whether my deferring is so polished my social advancement may have to be posthumous.

Love this post. I know I'd never pass the marshmallow test, being more of an instant pleasure/ Verucca 'I want one now' Salt sort. Which is probably why I've never managed to grow anything from seed. Or make a sourdough starter.

We enjoy the gluts that some seasons bring, but tend to grow the same crops each year. Last year it was so wet that our seed potatoes rotted in the ground. Just as well we don't have to feed ourselves from the plot.