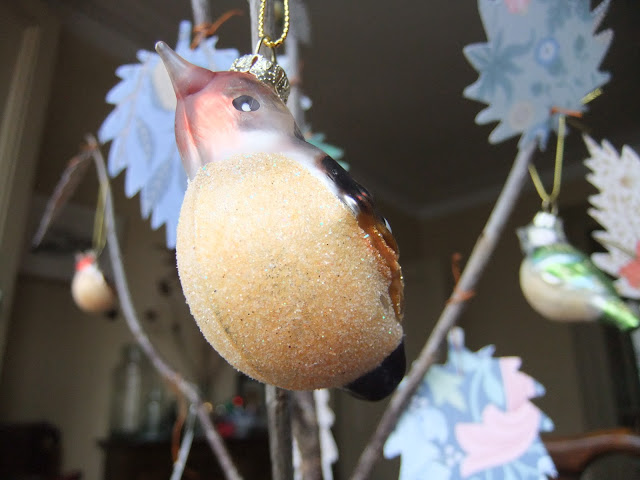 There was sunshine this morning.  We opened the windows to let  in some air, then finished decorating the cut branch that has been hanging around on the allotment since December, but no green leaves so had to use some that I cut up earlier. There's a coal fire in the kitchen and lunch is cooking. It feels a bit like Christmas again - without the pudding.


If you take a holiday in Cornwall in February, you really don't go for the sun.  You might expect a south westerly, some edging-on balmy-winds, showers if you are lucky, deluges if not. But the wind had turned and our only balm was used to keep out the cold.

We travelled by train where at least it was warm if not spacious.  I read. He looked out of the window and muttered "buzzard" as soon as we were well out of London then, later, lit up at five white European cranes on the Somerset levels where the water seemed to go on forever. I missed them, of course absorbed by Names for the Sea*. Still, St Ives was pretty as ever when we got there.  Brisk north-easterlies, bright mornings, cloudy afternoons, pasties, saffron cake, watching the sea slowly pulse through a range of blues from the window of the Tate cafe: all recommended for raising the spirits after a winter that seems to have gone on forever.

I would have said it was quiet but of course it wasn't.  The sounds of the seaside are as refreshing as the ozone, not just the wind and gulls, but the unfamilar rumble of our suitcases over the cobbles as we made our way through Fore Street trying to find our billet, fish frying, the crackle of dried cordyline leaves in the garden that we could hear from our bedroom looking out over the sea, dogs barking as they were taken for brisk walks on the beach.


We tried to think of how best to describe the sounds the sea makes. With so many beaches around the bay you get a decent choice: the crashing and banging on the wind facing rocky coasts, the distant booming at nightime, the sudsy slushy sounds of the as the waves crept in at high tide at Porthmeor, the sound of the workmen and their brooms sweeping up the sand that had blown over the harbour wall.  At night, the edges of the town were empty and quiet, the cottages clearly holiday homes or lets, the sea   in the background. During the day we could occasionally hear the church bell: on Sunday it went nuts, clanging at odd times. "It always does that on Sunday, no idea why" we were told by a woman in Barbara Hepworth's garden.


On Monday, we met our Cornish friends and went to St Just, spent around two hours in a cafe/ book shop to warm up, saw the faded 15th century paintings on the walls of the church where I particularly liked the near-communist Christ of the Trades surrounded by his tools, then tried to walk down to the sea but were stopped by giant machines doing heaven knows what. We followed a valley back into the town, the rush of the stream below us, interrupted briefly by the dry cough of a Cornish Chough flying over. As usual I was the last to see it but I can at least say that I heard it the same time as everyone else. When we climbed up high to the coastwatch station a bit later on we all shared the spectacle of the  gannets dive bombing in the distance and could only imagine what it might sound like out there on the water.


On our last day, we went back first thing to Tate St Ives to see the William Scott exhibition again.  A couple of days earlier, still fairly empty, there had been reverential whispers, the atmosphere of a church.  This time we had the place to ourselves and I had to subdue an urge to speak very loudly indeed and run my hands over the paintings when nobody was looking.  (I liked them very much and, back home, retrieved from the back of the armchair my mustard and orange felted bags to complement all the greys and browns I favour. To honour the painter, of course.)


After our last cup of coffee in the Tate cafe where the view is spectacular and the coffee good, then we mooched around the town, bought a couple of heart-stopping pasties in S.H Ferrell, supplier to the Mayor's events we were told on very good authority, and tried to find a place out of the wind, safe from marauding gulls.   was tempted to go in and have my cards read in one of those vestigial hippy shops in the back streets that sells crystals and beads and things made of jute but I didn't, just in case.  Then we made our way back up the town to collect our bags and trundled on down to the station to catch the train home.

I knitted and dozed and swore while I read the Hobbit on the way back to Paddington, but that's another story altogether.

With many thanks to Anonymous/Joan for recommending this book, which was perfect reading for this trip; to Felix for always inspiring me to think about familiar sounds in a different way; and to my bookclub buddy Mr Price who chose the Hobbit for our February meeting... and lenten penance.
at 12:36 10 comments:


There have been no zombies, although a nasty bout of norovirus did induce catatonic symptoms for a few days. The other glitch, apart from a freaky, slick attempted telephone fraud, was an entirely non-compliant internet connection causing the most haughty put-her-in-her-place disdain for my router from the call-centre technician halfway across the world.  This served to intensify my alienation from ISPs and the web in particular, and the complexity of modern life in general.

So, weather notwithstanding, we have been out and about and there are many small stories to share, starting with the russet coloured Cetti's warbler I caught sight of, fleetingly it must be said, dipping  under the boardwalk, on one of the few days when the sun came out.

I have a lovely long cardigan of a very similar colour to the warbler. I got it out of the wardrobe when I got home and wore it as much as I could that week to remind me of the bird and the boardwalk.