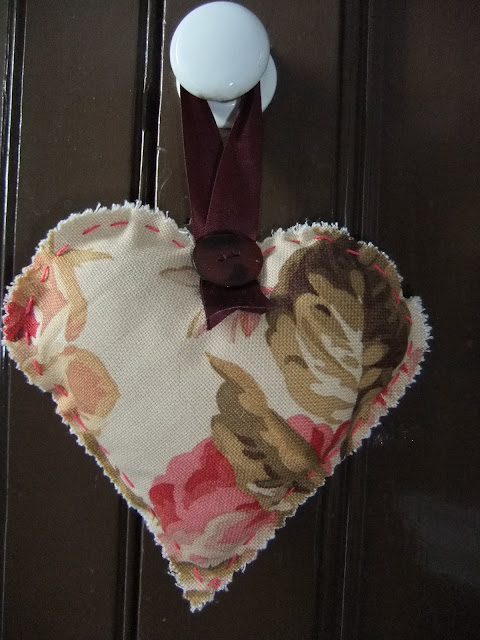 We had a lovely afternoon yesterday, some EEWI buddies and I.  Home made soup - leek and celery, and carrot potage*, a wee glass of port, tea, cake and shortbread.  I lit the fire to try to keep warm and the cats popped in to schmooze or laze by the radiator.  Then we set to with biscuit cutters as templates, donated fabric, floss, ribbon, buttons and lavender, and chatted and snipped and sewed.  Except for Elizabeth who has developed an obsession for Polish Porcupines which are lovely but require some dedication.  We're selling the hearts at our Christmas Market next week and any money we raise is going to a local charity for women which we support.


(Oh!  Have just spoken on Radio 4's "You and Yours" call-in about charity, second up.  Very interesting discussion, with lots of the issues people raised here being reiterated.  People it seems have cut back because of reductions in income, though not to the extent that the NCVO suggests.  Smaller charities are taking the brunt of cuts.  Among the issues raised by callers were real concerns about efficiency of the charities, no action taken on complaints about continuous requests for reduction in letters, continuous requests for donations.  Positive suggestions were to be firm (yes!), make direct debits to the charities which are meaningful to you, write to them if you are unhappy with them sending continuous bumph when you want your money to go towards services.  Sound familiar? One caller's daughter had decided to give an equivalent amount to charity when she bought frivolous clothes and found that this made her think about how much she really needed to buy something.  The Give More website was mentioned as a place to look for novel ways of giving which don't necessarily cost money (Hope signing up to access the guide doesn't result in more barracking.)  And, finally, a reflection on how tough it is becoming for some people, a rather alarming increase in the use of food banks.)

Hearts, and your own generous support, seem apt today.

*the carrot soup was inspired by a recipe on Liz's blog ages ago but I can't find the link - sorry
at 13:11

I loved the idea about the daughter who gave equal to what she bought for herself - I am going to do that!!
Love your blog!

Didn't realise that was you on 'You and Yours'! I once had an email read out on that and it was really revealing how many friends 'working from home' heard it!

Yes, differentiating between what you want and what you need really brings results - I frequently find I don't need, and often don't really want, either. Saves money, and my conscience! I started doing this routinely after hearing the Dalai Lama, who had toured a supermarket somewhere (why??) and when asked if he had wanted anything in there, had replied cheerfully oh yes, many things, but as he didn't need any of them, he had come out without.

But I do like the idea of giving the equivalent sum when I have bought for myself.....