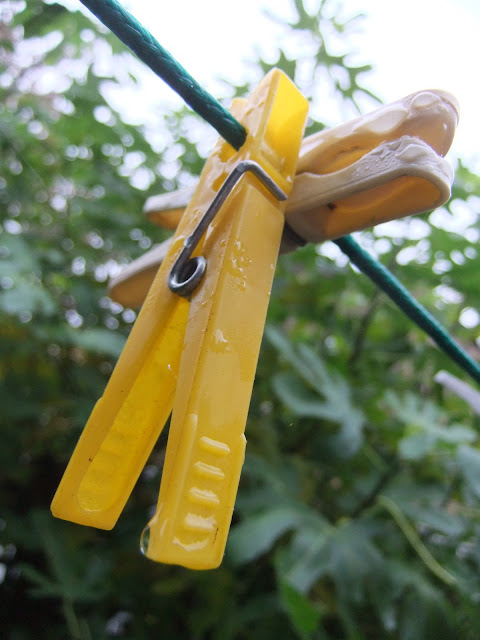 For one reason or another misty days in London make you feel like you are in the countryside.  The harsh lines of buildings and bricks are blurred and there is that sweet scent of damp leaves in the street.  In the garden, trees drip softly onto the paving and the cats are all disgruntlement. 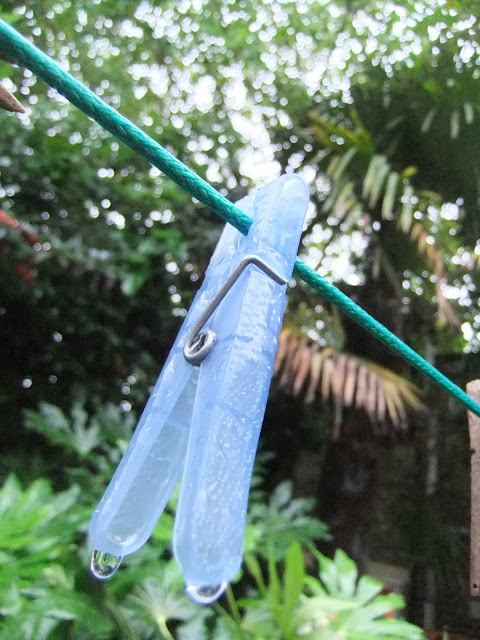 That was the weather today in London, except for a very short interlude when there was a subtle change in the light and the whole garden glittered with droplets of water, especially on the clothes pegs. 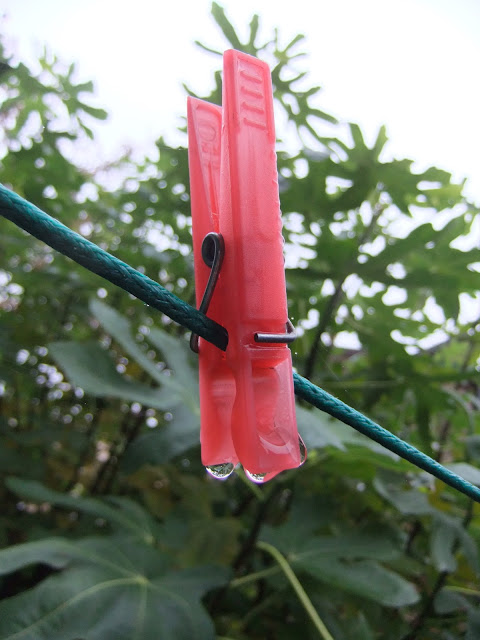 Now I must admit to feeling somewhat slatternly about leaving my clothes pegs on the line because, according to my friend's mother, they get dirty and soil the clean washing.  She's right I suppose. 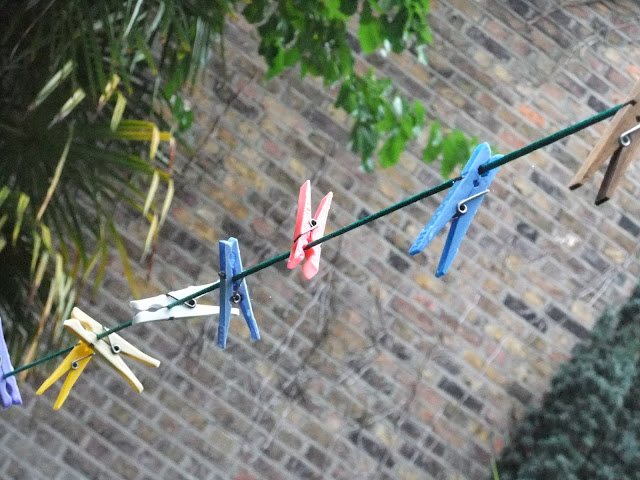 Such a pity she never gets to enjoy their jaunty, tipsy cheeriness when it's too wet to hang out the washing.
at 22:50 7 comments: 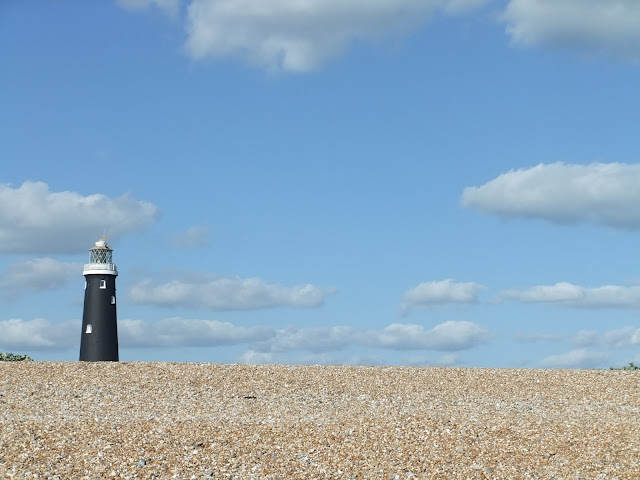 Even at nine o'clock this morning I had to have the lights on because it is so dark and grey, in here and outside.  It must have been the anticipation of this greyness that was behind my impulse to go back to Dungeness a couple of weeks ago, to catch as much of light as I could while it was there.

We found just what we wanted on an exceptional late September day, warm enough, masses of low cumulus clouds scudding across the blue.  Beach, big skies, birds of prey, bumble bees, dragonflies, lakes, pebbles, shingle, wildfowl, wind.  Not my words, but the ones you will find on  RSPB website and they tell most of the story.   Those dragonflies - there were masses of them, red, blue, striped, and harriers, sparrowhawks, kestrels.   And there was the space and light, of course.  I'd entirely forgotten, along with my sunglasses, just how bright it is out on the shingle.

It must be the light that makes Dungeness impact so strongly on the memory, that and its oddity - ramshackle houses, fishing sheds, boats, the lighhouses, a seemingly interminable wind and, on the beach, that fierce sound from the sea hitting the shingle and dragging through it, even the serpentine pipes of the power station. We brought our boy here when he was little, five or six years old and with a minor obsession for collecting green plastic fishing floats and bits of scrap metal which ended up in the garden at our allotment. We knew about the garden at Prospect Cottage and thought he might find it inspiring.  I asked  him before I started writing this and he still remembers the day we drove out across the shingle, bought a giant spotted turbot from one of the fishing sheds, went to the top of the lighthouse where he boldly stepped through the little door on to the windy platform at the top while I clung to the wall with my heart in my mouth, and took a ride on the miniature railway. You can still down with a cup of tea outside the cafe at the end of the railway line and you'll see the delight on the faces of the boys - most of them grown men - inspecting the engines and having their snaps taken with them.

One day out on the shingle and marsh wasn't enough for me. We went back again a week later.  This time I wanted to see the bones in the ossuary at Hythe, but we were too late - it closes on 30th September for visits. After a quick trip around Hythe, quite pretty as it happens, we mooched along to Dymchurch to sit on the rather fine seawall for a sunny home-made lunch and a cup of licorice tea. Praise be for the vacuum flask. Then we stopped off further down the beach road and found a sign pointing us to the acoustic mirrors or Listening Ears out on Denge Marsh.

We walked across the shingle - hard work- before we reached the track which takes you around the lake and down the causeway along a very pebbly path, surrounded by bushes and trees.  Then suddenly there they were, on a small island.

The Listening Ears were built here because of the silence.  This was before the shingle had been scoured away for the building trade and the lakes later created.  Now the air is full of the sound of wildfowl.  And on the way back, with the sun going down, there was the crunch of our feet on the shingle, at least before we reached the rows of bland bungalows which line the beach road.

The bridge will be open on 4th November.  We may well be visiting again.

I think I overdid it yesterday, for I have been unable to think in a straight line and can hardly walk in one with my aching joints.  It started with a visit from the chimney sweep.  This year I knew I had to get round to having the chimneys swept before we started on our domestic burn-ups. It was only when I called and he asked when we last had them done that I started to hum and hah.  "Erm, I think it was your dad who came."  Secretly I knew perfectly well that in fact we have only had the sweep here once in nearly 30 years.  Turns out that the old man has been dead for two years and was ill for several years before that.

The sweep duly arrived today 20 minutes early.  My goodness that man had some energy.  After five minutes he reminded me that it was traditional for the sweep to be given a cup of tea.  It would have been foolhardy to refuse.  Then he set to.  After a little while he called "It's out" and I was urged - twice - to go and see the brush peeping out all Mary-Poppins-like through the chimney pot.  The chimneys, it seems are in fine enough fettle too, which was a relief.  By the time he left, after a second cup of tea, I knew all about him, some of which you can read here, and more.  I can tell you where he went to school, how many kids he has, his philosophy on life, all about his clothes, his cars, his homes, his health, his wives.  But I liked him, I really did, he seemed completely wysiwyg, even though I had to sit down and have a quiet cup of tea when he left.  The two rooms were spick and smelt mildly of soot, rather nice, and today there has been the occasional gentle fall of dustiness into the hearth.  I think it may be a spell.

He was gone just after eleven leaving me with time to visit the dentist, the supermarket, meet a friend for a late lunch, look around the Whitechapel (more to say about that), show my friend around my childhood stamping ground, come home and make a heart-stopping bakewell traybake - rather nice but so very much butter - and get along to the WI for a talk by the generous, funny and gently inspiring John-Paul Flintoff on how to change the world.

So I've been very tired today, but I think it is the chimney sweep who's mainly to blame.

It's asparagus fern and some rosehips on the mantle piece.  Never before have I witnessed such a forest of fern. And the Bakewell looked very pretty all studded with raspberries but had to be taken in a rush to said WI meeting.