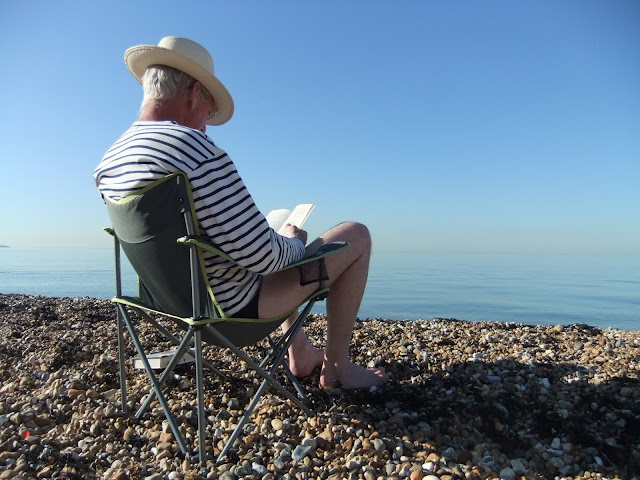 Less than a week ago, it was warm enough to swim and wear stripy tee shirts and straw hats on the beach. Such a lovely day we had.  He read some trashy book about spying and I tacked some bunting together and then went swimming in the cool, calm water.  We had hardly anything to eat - a cup of coffee and a very delicious honeycomb ice cream each.  I complained that he had forgotten that I had asked for a latte and not an americano -  he had probably never listened anyway.  Very hot days can suppress both the appetite and the memory it seems.

Food, though not eating, was very much on my mind.  The bunting I joined up was a collection of triangles depicting food stories crafted by my buddies at the WI.  It's a project we have been working on most of the year and the finished triangles were strung between two trees last weekend at a local community fete where we sold cream teas in the WI tent. We had made dozens of scones - plain, fruit and cheese.  And, even if I say so myself, my six dozen were the finest scones I had ever made. I had done my research, you see. After years of mediocrity, I had watched the Great British Bake Off, listened carefully and discovered that the secret was to "chaff" the dough and not to handle it too much. And it worked, even if I decided not to follow the complicated recipe recommended (here is the one I used). Unfortunately, it was so hot that people found it too much work to make their way to the tea tent and so we had to hawk our baking around the site a la Nell Gwynne. Learning point: cheese scones sell well to men who have been sitting outside the beer tent all afternoon and would not be seen dead in a tea tent.

I very much  enjoyed collating the food stories and stringing them all together.  The improvisation with scant crafting supplies was a delight and the stories intimate, funny and touching.  Memories of mother's apple pies from someone far from home, jam sandwiches made with fluffy (fun fur) white bread, trips to a fishmonger who gave away ice lollies, the importance of eating fruit on the road to recovery from a rare and debilitating illness, an introduction to (nylon shoulder pad) mussels and chips on holiday as a child, ice cream, adventures with undercooked beigels, pints of Guinness, podding (green plastic bead) peas with Granny after breakfast, Granddad's deadly bread, heavy as a brick, spread with Lurpak and, one of my favourites, a definitive "I hated rhubarb".

We are bringing all this together this Sunday with a grand feast, and last night some of us were working with the project chef to prepare food from the Edible Garden. It was like having a magic show in the kitchen.  Mike turned up with tiny packs of garlic chive flowers, feverfew and oxalis to taste - I'd always thought of oxalis as a weedy pest but it was a revelation, lemony and tart and green all at once. We boiled water and measured salt, mixed them in the correct proportions,and brined cabbage and chard stems, radish and nasturtium pods. We learned how to use nitrogen cavitation to speed up the process of infusing olive oil with thyme. And to round off the evening we had a quick burn up in the garden of hay and hickory alder to smoke some chillies. 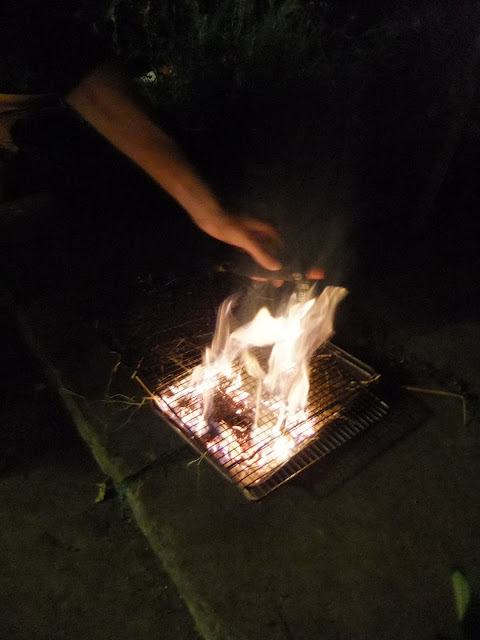 Part Heston, part Merlin, not a hint of Delia.

heaven. if you'll resend your address to aceyamapola@hotmail.com, i would be thrilled to send you some heirloom chimayo chile seeds, macondo's greatest achievement.
if you'd like, some o'odham keli basso melon seeds, too (arizona desert indians) if you'd like.
http://en.wikipedia.org/wiki/Chimayo,_New_Mexico#Chimayo_chile

It was beautiful here as well, a last gasp for summer! Colder now and plenty more rain. I haven't seen oxalis in my garden, must be the only garden thug I don't have! If I find any I'll give them a try.

Your first photo is perfect. And you've made me determined to try my hands at scones again after decades of holding off.

A lovely story :0)
And Thanks for the scone recipe !

Summer seems still to just be hanging on here, but not for much longer I fear!

Sad that I missed what could have been the last hot week of the year, but delighted that everyone seems to have had chance to enjoy it! I spent the week north of the border where to be fair the weather was much better than I had expected!

How satisfying to produce a batch of best ever scones. (My dad taught me not to over mix the wet enough dough and pat it out rather than roll it.)

Love food related memories. My mother wasn't the family cook but she made the best fried egg sandwiches.

Liz - the bunting included a friend egg! Or googy egg as it was called in the maker's home.

How lucky you were to be taught by your dad how to make scones. I can't tell you how many unsatisfactory scones I've made over the years because I never knew the secret.

Have just heard Nigel Slater on the radio talking about the memories associated with sweets. Sherbet Fountains, parma violets. I'm sure you must have hundreds.