and there is honey for tea 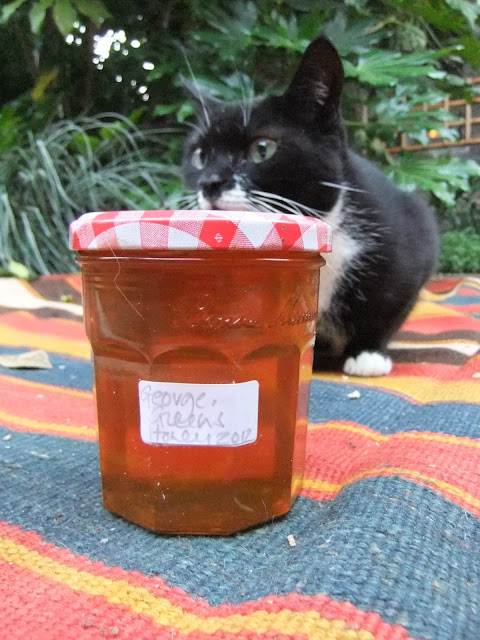 The bees on the Isle of Dogs have been happy and healthy unlike a lot of bees this year. Apparently it took a long while for them all to get busy this year because of the cold and wet. There were a couple of weeks in May when everything came into blossom, and just as suddenly stopped when the rain returned. The bees didn't know whether they were coming or going.

The apprentice beekeeper explained all this to me, he who has been most diligent in attending classes and reporting back. I was given a tour of the beehives a few weeks ago not, as I had erroneously said, on the roof of the school, but in a scruffy little secret garden at the side of the car park.  I thought they would be pretty little houses, not skeps perhaps, but at least painted like a Kentish clapboard house.  Not a bit of it. The hives were very workaday. I was told  not to go too close as the bees get upset if you obstruct their route to the entrance to the hives, so I stood well back.  There is after all something about the bees' gentle busy-ness that inspires respect, not least because the ground around the hives is littered with the corpses of dead workers.  They'll have been round and about - the gardens, Millwall Park, Mudchute, maybe across the river to Greenwich, clocking up the miles, plenty of fresh workers being nurtured to replace them when their time was up. 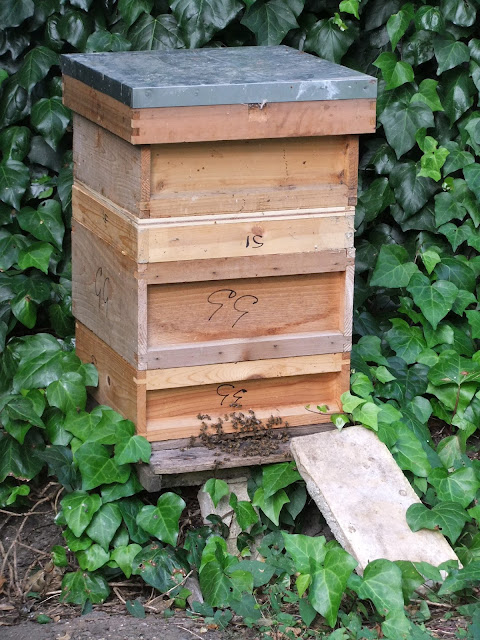 There was a little excitement last week because it was time to bring home some honey.  He described the process:  take the sliders frames from the hives, scrape off the cap of wax, put the sliders in the centrifuge, spin, then catch the honey in the jar  - and bring it home to settle before spreading on scones or stirring into fresh yoghurt.  Simple. This batch has a complex, intriguing flavour.  I'd like to say I could tell that this is London honey, but I can't.  It's very subtle though, first a slight bitterness, with the sweetness coming through softly and slowly, quite unlike some commercial honeys.

Unfortunately we are on rations. There is only one jar.  Every now and then I sneak a small spoonful.  And an extra one just to make sure that this is a sweet and fruitful year.

And is there honey still for tea? Or have you gobbled it all up today, unable to resist it's sweet siren call?

You have me longing for honeycomb now!

I was lucky to be given a jar of honey a couple of weeks ago by a friend who keeps bees in Deptford, and now have the task of making it last as long as I can! Its taste was a revelation after years of processed honey blends; I can definitely taste mint in it, on the edge of other, very complex, flavours.

I know someone who keeps bees, the honey is quite different to mass produced stuff. Yours is much darker, wonder what flowers give the colouring?