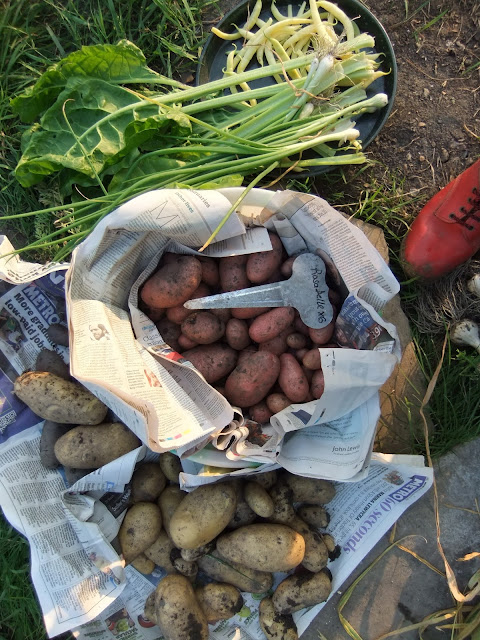 Suddenly, we have a crop.  I was beginning to wonder if I would ever see a courgette on the sad little plants, cautiously planted several feet away from each other and separated by cold, dark matter for the last several weeks. Now, after a week away, I find the gaps are filling up with leaves, one fruit has ballooned into a zeppelin, and Black Beauties and Sunburst are shooting ahead.  The Black Shetland have been dug up, a lovely dark purple but hardly prolific, early Rosabelle have superseded the specky shop bought spuds, and the Charlotte are in the queue for the plate.  Fat, juicy bulbs of garlic are drying off in the shed and the sweetcorn, sown straight into the ground and resilient against the onslaught of  slugs and snails, are coming on very nicely. The peppers have been less lucky, and the tomatoes, begged from friends and bought from market stalls, are full of leaf and fruit - and a touch of blight if I'm not mistaken. 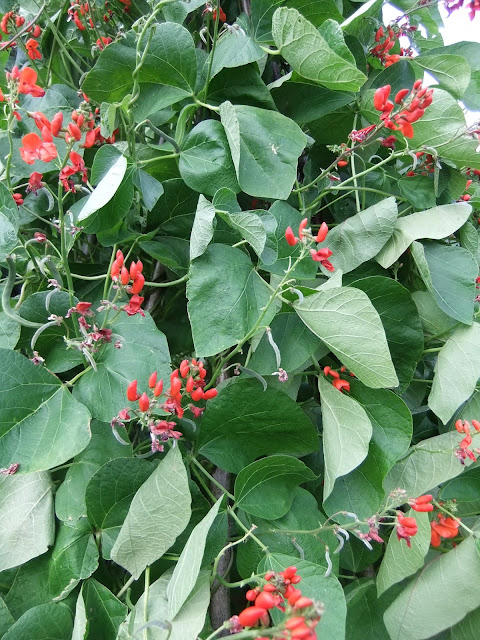 But there are beans to be had instead, pretty yellow dwarf french beans for now, lots of them, to eat with leaf chard and spring onions.  And soon, notwithstanding a plague of locusts or flooding - who knows this year? - there will be a glut of runner beans.  I don't think I have ever seen so many scarlet flowers.  Not satisfied with their wigwam, the tendrils are even starting to colonise the neighbouring asparagus fern, itself as high and dense as a hedge. 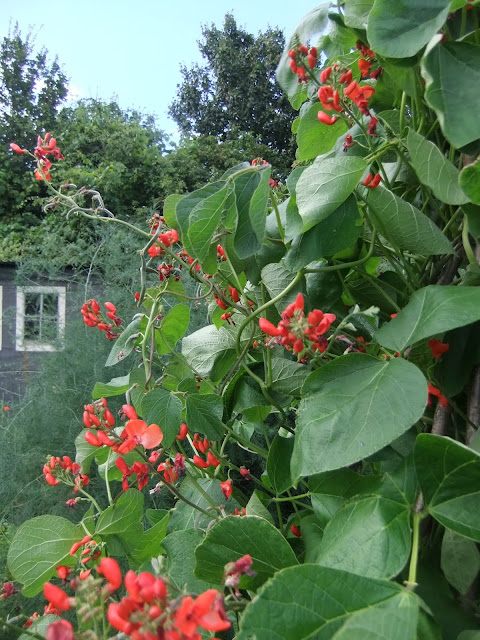 The topping out of the wigwam has to be one of my favourite milestones in the growing season, the sheer abundance and promise they hold.  Just like poppies, you can never quite capture the brilliance of the flowers, bleached out by the light even when you wait until evening to snap them.  A couple of months back, my friend and I were interviewed by Felix for her Sonic Wallpaper exploration of the collection of Museum of Domestic Design and Architecture and we saw some beautiful beanstalk wallpaper which perfectly captured the scarlet against the green.   I spent a very happy hour this week listening to what everybody had to say about the different wallpapers, and the sounds that Felix had so deftly woven in to the observations to create a sound picture. I especially like the runner bean sonic wallpaper which for me perfectly captures the sounds of this summer.  If you want to hear the chatter of beanstalk lovers, including opinionated me, or the fantasy of my own still room brought on by another beautiful wallpaper, you can listen to the recording here and here.

Suddenly I find that I am thinking about pickles and chutney and jams. Yet again.  And because the sun has come up while I've been writing this I'm off to bed to dream about them for an hour or two.
at 05:38

You're as bad as I am, blogging in the middle of the night!

Your bean plants look spectacular! And how lovely to hear your voice. On the quiet I must be one of Felix's biggest fans, and those MODA recordings are delightful! I rather envy her her job if I'm honest.

A still room of one's own ... now wouldn't that be marvellous!

Annie - it's very unusual for me to wake up in the middle of the night. I put it down to two cups of coffee in one day and maybe a little guilt about too long an absence.

I loved listening to all the recordings for the Sonic Wallpaper. So many of them made me smile!

The bean flowers are lovely in their own right, like sweet peas but a richer colour. I love French beans, raw as well as steamed.

Your veggies will all taste wonderful, I'm sure. Felix's work is really fascinating. Makes me think of 'loud' patterned wallpaper in an entirely different way.

I'm , appropriately enough , green with envy ! That all looks magnificent . And you've got chard , one of the best and most useful soup vegetables in the world .
How have you managed to control the slugs and snails ? Neighbourhood Watch ? Or have they all gone to the Olympic Park ....

A very belated return visit to you and in answer to your question re our chick: they are Welsummers. I can well understand why you thought they might be Marans from both the colour of the eggs and the chicks! We ended up with just two (an unusually low fertility rate with this batch of eggs!). So much to read in this post of yours and I am soooo jealous of your beans in particular. We have been getting dawn and dusk raids by deer and they L.O.V.E our beans, dammit!