a big moon and a cup of raspberries 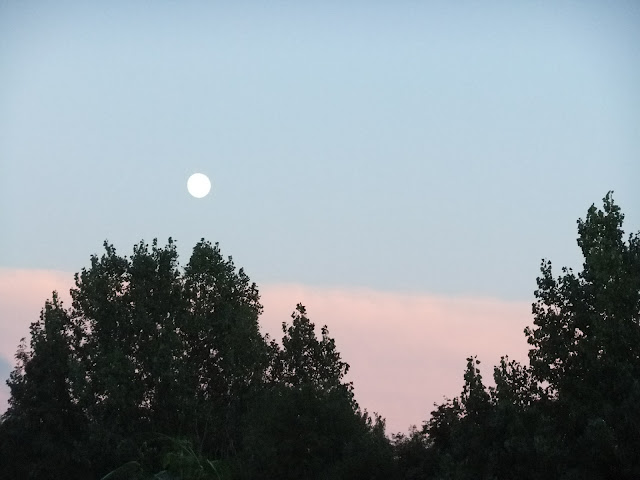 Every year. like clockwork, my mum says to me that the nights seem to be drawing in early this year.   And every year it reminds me how delicious that short space between day and night can be.  I especially like to go to the plot when everyone has gone home and squeeze in half an hour of pottering and picking just before sunset.  Like tonight, when we arrived just before eight as the moon was rising.  There was enough light to find easily the overgrown courgettes, the patty pans hiding between the leaves like crashed flying saucers, the prickly cucumbers, nasturtium leaves and flowers, and little gem lettuces going to seed too early. Runner beans are always more of a challenge with the long beans hiding among the leaves. 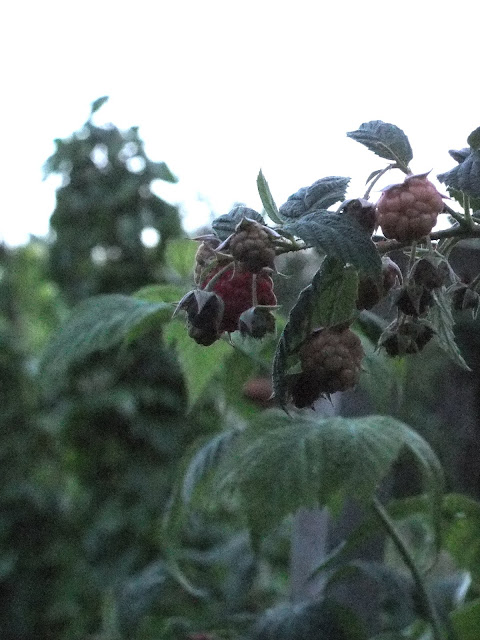 As the light gets lower, a bit more care is needed to avoid the residual thorniness of the sprawling raspberries.  The gentlest cupping of the fruiting tips in the hand helps to separate the ripe fruits from those that need to be left behind.  Even after eating the roundest, softest fruits, there were still enough to half fill a cup to bring home. 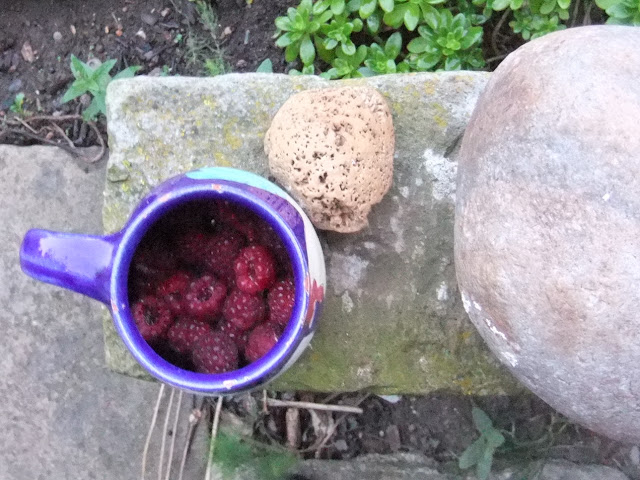 Everything else is fat and green, notwithstanding some pathetic beetroot shaded by asparagus fern. I'm feeling smug that those little plants that looked so isolated early in July have now filled the gaps so lushly. And I'm pleased that we let some beds do their own thing - borage, nasturtiums, calendula, and red amaranth* - all running on the rampage. Such luxuriant laziness. 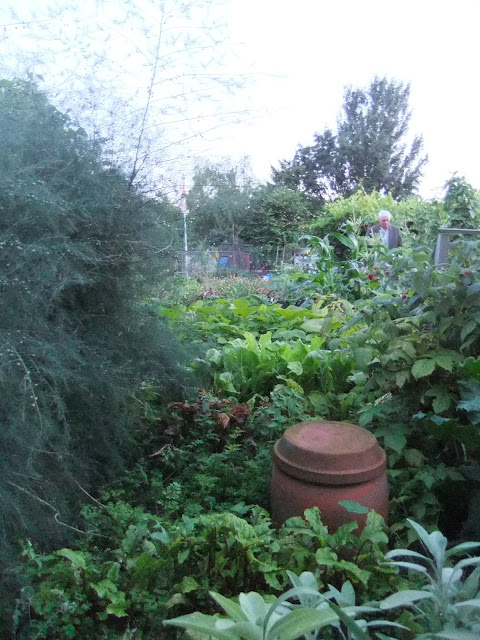 At heart I'm a pretty slack gardener, I know that.  This year, the early coolness and the soaking hasn't been so bad after all, it seems.  Watering cans are standing redundant and for once my aching bones aren't down to lugging heavy watering cans - oh, so delicate are our sensibilities that we could not possibly contemplate the lightness of plastic, my dears. 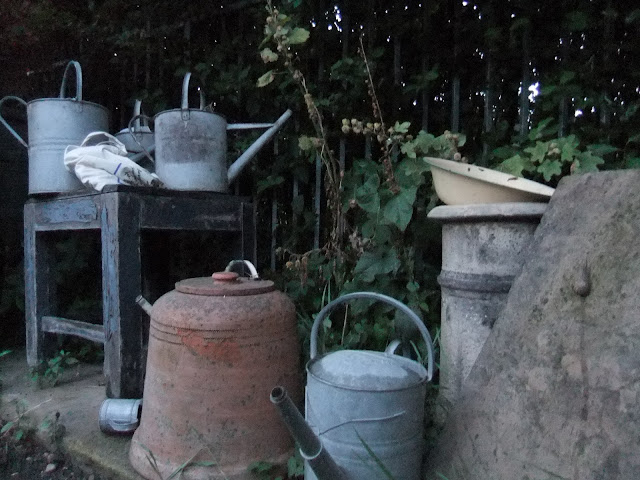 All's well that ends well...yet again.  And there's half a cup of raspberries to eat yet.

* Has anyone ever eaten amaranth?  I know it's edible and the red leaves and tassels are so striking too. But what does it actually taste like?
at 22:53

Ha ha, I have tin watering cans as well. Not a fan of plastic!

Raspberries!
Raspberries!
Juicy raspberries!
Oh sorry , you asked about Amaranth . I've only seen the flakes , looking quinoa-ish in health shops and there are lots of nourishing and downright hearty soup recipes using the flakes ... even one with courgette . But as long as the leaves aren't toxic like rhubarb leaves , I suppose you could use them in stirfry ? Or like red chard ....

When the nights started drawing in, my dad always used to say "It's getting late early". So I say it now.

What absolutely beautiful photos. I've been catching up with your blog as I don't always seem to get a nudge that you've posted something new. Who knows why? Mysteries of Blogger. I love your hare photos too.

They are a bit tough, but the baby leaves are fine in a salad. I grew masses of the stuff last year because i wanted to try harvesting and eating the seed - as said before, a bit like quinoa and very healthy. But it has to be winnowed and is a real faff - you end up with far too much dust and grit even after several winnowings during which you lose a fair amount of the grains - so I have great respect for amaranth growers in the less well-off countries. The chickens ended up with my harvest.

Janerowena - thanks so so much for the info on the amaranth. Salad leaves it is! Attractive as it might be to winnow, I think I have a big enough back up of other preserving projects to keep me going and may give it a miss.

Ooh I very much like the look of your lush green allotment - this is what I'm aiming for !