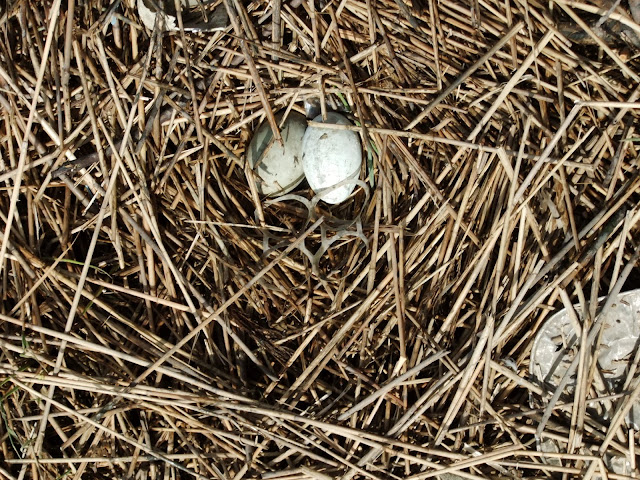 Down at Three Mills, the swans seem to have forgotten that this part of the river is tidal.  This was all that was left of their nest of nine eggs after an exceptionally high tide a couple of weeks ago.  The others are dashed about in the reeds and the mud.  They did the same last year according to an allotment neighbour.  And they are starting to build another nest in the same place.  Dumb swans.  You'd think they'd know better.

At home, I've taken to sitting with a blanket over my legs in the evening because it's so chilly. I'm enjoying it though.  It means that I can wear some of the wool jumpers I've been buying from the second hand stall in the market.  The idea was that they would be cut up and made into a patchwork blanket, but instead the house is turning into a refuge for old woollies.  I've even got one jumper so full of holes that it's fit only for practicing darning on but I could not bear the thought that it would end up in landfill. 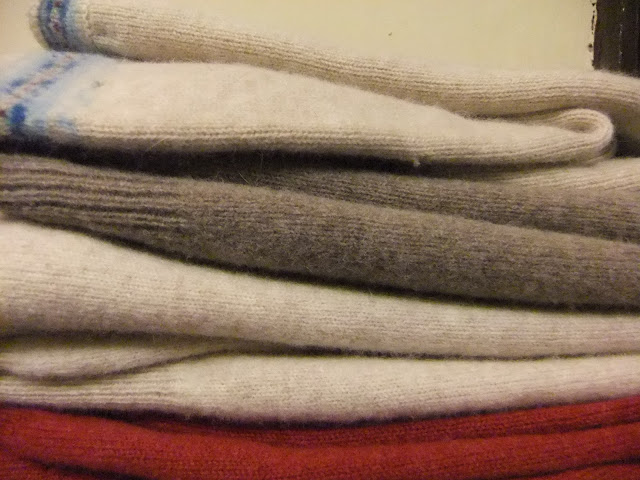 Hello, Colleen. I don't seem to have your address to send you the little purse I have for you. Would you like to email me your address? Thanks, Jane

Really interesting article in the Financial Times on Saturday (I buy it for the arts section and magazine!) about the massive increase in prices paid for secondhand clothes in Britain in the last five years - prices have tripled. Huge market in Eastern Europe and this is particularly eating up winter clothes which can't be sold to African countries. Really worth a read and is available on line at:

You have to register with the FT to read it but it doesn't cost you anything.

Hope you were able to watch the Strand East tower go up from your Three Mills perch. We did pop up to see it 'live', having been to the planning consultation a few months ago, but I have to admit to having spent far too much time watching it on the Strand East webcam.

My neighbor makes lovely mittens out of old sweaters ...really warm and useful ..If you need a pattern I'll ask her :0)

The swans here built against one of the bridge supports. Locals have been hanging over the bridge to watch the nest/eggs/parents and looking forward to the spectacle of cygnets. Yesterday, there were two bricks in the nest and the swans had gone. So sad.

Annie's comment made me feel sick. But then if people will drop things on passing cars I'm not surprised they are ignorant enough to harm innocent wildlife. I imagine a lot of people would like to get their hands on the culprits.

The attrition in ducklings is always sad to see in the Spring .
Nine little yellow balls of fluf become six overnight , then four and by the end of the week the mother's lucky if she's got two .
We've got quite chubby cats round here .....