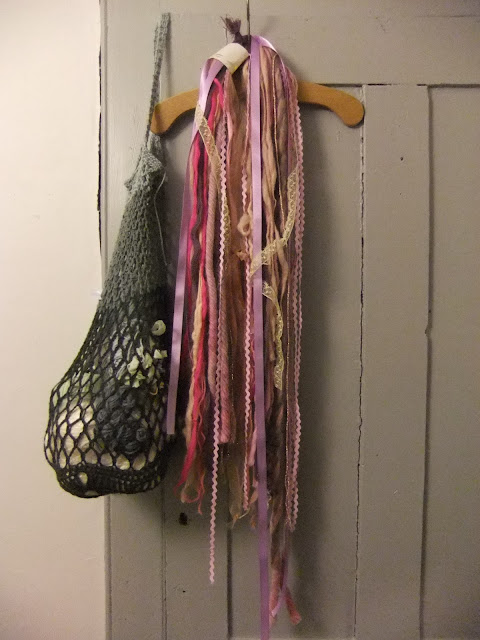 Even before the car was put to death, I was making an effort to buy closer to home rather than use the supermarket.  It's hardly penance.  I've been going to the same market stalls for years to stock up, shamelessly flirt with the fruitman to get an extra apple, and have seen his lovely boy blossom from a shy teenager into a fully blown coster.  There are also scores of small local grocers with exotic names to indicate their exotic wares, all vying for custom.  Big bowls of peppers, tomatoes, bananas, grapes, all at a pound, spices, oils, ghee.  There is a proper, first class corner shop too where you can buy everything, and a friendly second class one that we laughingly call our wine purveyor.  (Ah, Robert ,we love you and Ye Olde Corner Shoppe, but why do you never  have enough Weston's Organic or Barley Wine for cold nights?).  All it needs is a bit of effort, some planning and a willingness to go without occasionally.

My favourite haunt, though, has to be the wool shop.  Yesterday afternoon after one abortive effort to reclaim my parking licence, and a more successful second visit, I popped in to PYF just to say hello. Rachael was on her way out to do her own local shopping at the Ginger Pig - I may have heard sausage rolls mentioned - and Louise and I sat in the sunny window chatting about life, me sending sly sideway glances to the surrounding lusciousness.  And that was it.  Rapunzel like locks of pinkness caught my eye, and I'm not even a lover of pink.  She says they've had it for ages, so I can only imagine it was the sun glinting on the lace and silver paper.  It's called Make, Do and Mend and it's worth every last point on the ration book, even if you only cast admiring looks, give it a stroke now and then, and think of princesses stuck in towers or out with their shopping bags.

I really miss east London's Asian shops. We do have excellent local shopping here, but not the variety that you do.