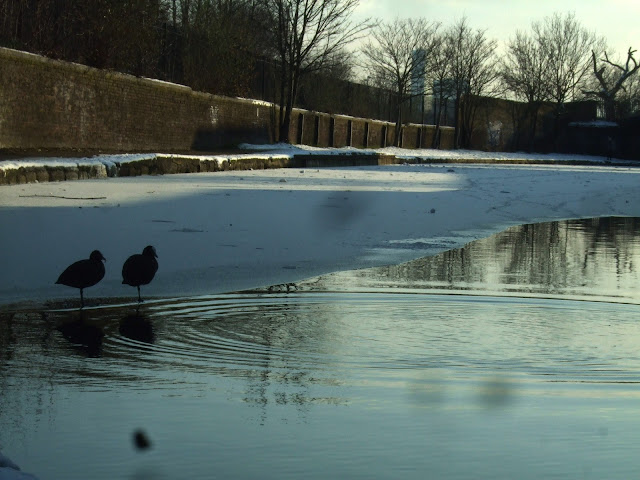 I noticed that I had three unpublished posts from a while back and decided to have a clear out.  This one,  from January 2010, with a picture of a frozen canal with chilly coots, was labelled "cold war"'

"I have decided to embrace austerity this year, use my car as little as possible and buy as much as I can from shops I can walk or cycle to. It doesn't mean I won't go to the supermarket at all, just that I will be constrained by my carrying capacity. Both the pannier and the shopping trolley* are coming into their own. Thus it was that when I left the house to go shopping the other day my son remarked on my somewhat eccentric appearance - russian style hat, bulky greatcoat - 'you're dressed like something from the cold war."


It stopped there, somewhat mysteriously.  Now here we are again in a cold snap, with snow forecast tomorrow, the bank of cold air over the continent holding back warmer air to the west.  At home, a different cold war is taking place.  We have been eating our way through the freezer**, and our stocks of cans, jars, bottles and potatoes in the cellar.  We've eaten rather well, much better than the Ingalls, did, though whether the gods of austerity really required libations from my mum's Christmas gifts of a bottle of Bailey's Irish Cream and Harvey's Bristol Cream Sherry is debatable, if not shameful.   We are down to last knockings now: a menu of cauliflower soup, turkey and rhubarb pie should at least take us to the point of defrosting.  We may have to share the bag of prawns and coley with the cats to get there.  Alleluia!

And I almost forgot.  When I was clearing out  my posts I realised that today is my fourth anniversary of writing this blog and my next post will be my 500th.  I think we may have to celebrate, don't you?


* I think you should know that I upgraded to a fake leopardskin one after my brother said he saw Helen Mirren with one in the butcher's in Wapping, and if it's good enough for her...
** I was very taken a while back with Esther's post on doing without either a fridge or a freezer.  I think she may be on to something.

Happy blogversary! Thanks for four years of interesting and entertaining posts.

500 posts?? Fantastic! I'm not sure when I caught up with you, but I really enjoy reading your blog. Here's to the next 500!

'caught up with you' - I don't mean I have written 500 posts too. I mean, I don't know when I started reading your blog. Why didn't I just write that? I think I need some breakfast ...:)

A very happy fourth blog-birthday -- a real achievement. I'm not sure trying to do without a fridge would be worth the struggle ... a huge stride backwards in time, no?

We had a big fridge and two enormous freezers when I was growing up (we lived in a shop) but noone else did in our little part of the world. I remember my gran putting Sunday trifles to set in the backyard and there were always crunchy black bits on top. Wouldn't happen now as there's no industry round about.
Happy 499th post. I hope there'll be many many more.

Happy, happy blogoversary. Please keep doing what you do so well :D

I do like the idea of eating up all the food that is stored in the house and starting again, although actually I don't keep that much in reserve and only have a small freezer. I agree that Esther has a point, but I keep dog meat in my freezer too now and with seven dogs I doubt I could carry what I'd need to buy daily for them and us. And living in a village with a good farm shop, a good butcher, and a great delicatessen is fantastic but unless every one of their customers suddenly upped their spend I'd be bankrupted by shopping there well before their prices came down. I get my shopping delivered, at least that saves on overall fuel consumption.

That's an achievement so Many Happy Returns. I think one could manage without a fridge if one had a larder and shopped frequently unfortunately I live in Canada where larders are unheard of. Even winter is no good as a free outdoor fridge these days.

happy anniversary! A worthy excuse for a celebration!

Happy 4th anniversary! I didn't have a freezer for many years, but then my Mother gave me her old one when we moved here 4 years ago. I never felt deprived without one! (Don't have a dishwasher either but would be isolated without a car I think)

Congratulations.
Re freezers - we could not manage without ours, even though we live within sight of our village supermarket. I like to cook batches of easy meals for working days, and freeze them down. I love having a permanent supply of supper meals to hand. Now, a microwave we have yet to acquire, and I'm unconvinced that the world is a better place with mobile phones in it...