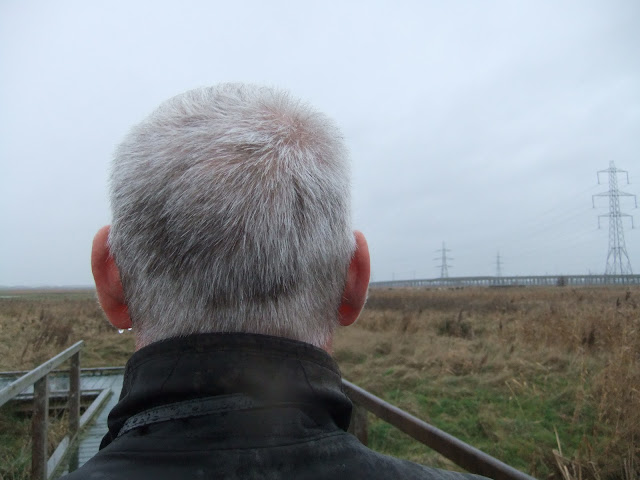 I suppose he should not have asked me to cut his hair after I'd been watching Great Expectations (still on i-player atthe time of writing).  By the end of a walk round Rainham Marshes on Sunday, he rather resembled Magwich emerging from the water.  My tweed coat just acted as a wick and little rivulets ran out of the corners of the hem.  It was a good start to the new year. 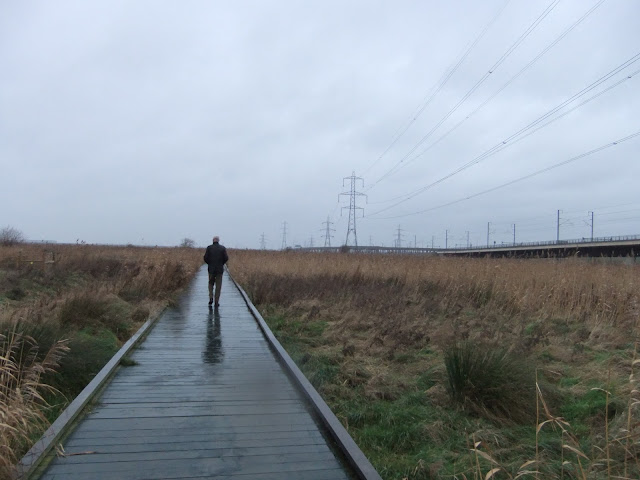 The next day, the last day of the holidays, we followed the Walbrook from Shoreditch to the Thames. Of all of Tom Bolton's route, this is the shortest and in possibly most elusive, for there is very little evidence of a river.  No surprise really.  Even though the routes were only published last year, buildings have already disappeared, routes blocked by new building sites.  It's the nature of the City, ever changing.  Bolton suggests standing beneath Richard Serra's Fulcrum at Broadgate and thinking about the "echoing subterranean spaces of the Walbrook in its sewer pipe below".  We did, of course. 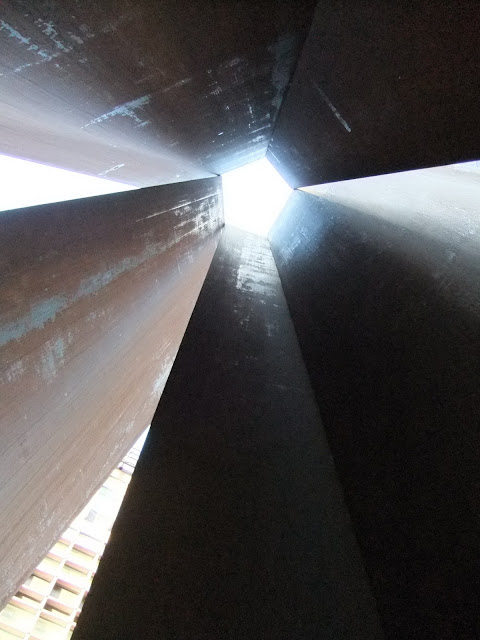 Even though it was a bright day, it was chilly in the narrow lanes and wider streets where taller buildings created wind tunnels.  There was a sighting of the join between the old London Wall and newer bricks; the opportunity to pay homage to Vesta and an appropriately fluvial Neptune clone in the faux temple on the corner of Bank; interesting rustication on Throgmorton Avenue; an unusual viewpoint of St Paul's Cathedral above a building site, soon to disappear. 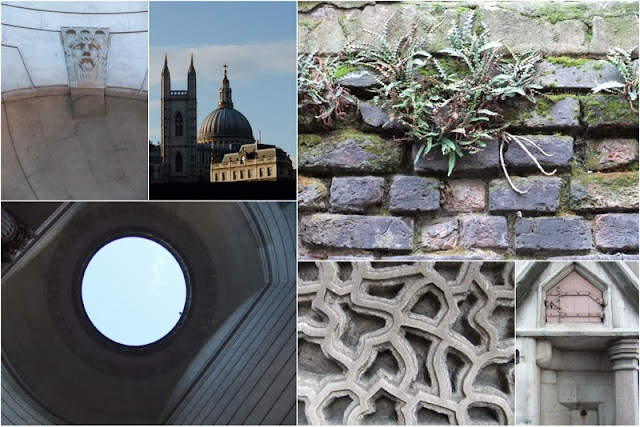 The walk took us through streets I've walked through scores of times on the way to work but without thinking about a river below.  We ended where the Thames Path meets Cousin Lane. With the tide low, we checked the foreshore and examined bits of river-glass,  pottery shards, flints and bones. Then we looked down Three Cranes Wharf into the storm drain outflow below without seeing even a trickle of the secret river. 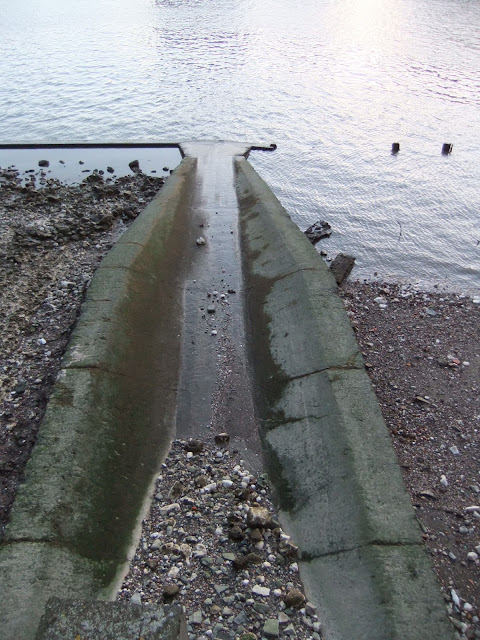 It didn't rain though.  And Tate Modern does a decent pot of tea and a good line in surrealism.
at 18:35

Always good to keep expectations to the minimum, often you end up being pleasantly surprised. I enjoyed the BBC's latest version, especially the scenes on the marshes - any idea where these parts were filmed? Not in the Hoo Peninsula I'll wager. And naturally Greenwich featured heavily, seems it's de rigeur for costume dramas these days!

You are possibly the only person I know who might convince me that city living is a good thing! Lovely photos, as always x

KN- John thought that the aerial shots above the forge looked like Romney Marsh. And we definitely know that there was some filming at Elmley Marshes RSPB reserve on the Isle of Sheppey because we happened to visit the day they were there. No Magwich though.

I very much enjoyed Great Expectations, especially the marshes. And all that talk of the London Stone too! I want to watch it all again before it disappears from i-player.

Annie - what a lovely comment. Yes, there are good times here in the city ...now and then.

The filming was very atmospheric and Ray knows how to do threatening! Not sure I'd like him materialising in front of me.
I read something the other day where a person had gone to the Tate Mod just for a cuppa!

I watched all three episodes last night and loved it though adult Pip was a bit too straight from the Prada catwalk looking for me. Love those photographs. Which camera did you buy in the end?

Liz - I bought a Fujifilm Finepix F70 EXR, similar to my old one. It's just a little point and shoot, nothing fancy, and it goes with me everywhere. I am tempted to upgrade to a more sophisticated camera though!

I have been dethroned from family hairdressing duties. My boys now have their hair fashionably teenage boy long and so pay reluctant visits to the local Polish salon. As for Pete, for years he was happy with me and the clippers but now he has moved offices and found himself round the corner from a Turkish barbers. It's just off Whitecross Street and offers cut throat razors, hot towels and - the deciding factor - the flame in the ear. I cannot compete and so have had to give up gracefully!

Loved Great Expectations. On one BBC piece I read they said that they couldn't film around Cooling because of needing to get shots that didn't involve power stations.

I know from Diamond Geezer that they are planning to move the London Stone again. I remember having to seek it out when my kids were into the Stoneheart series of books. Of course, when I mentioned this to my eldest (who enjoyed Great Expectations very much) he had no recollection of it at all! All that parental effort!

For a real escapist treat do go and see 'The Artist'. 3 generations of us went on Saturday - aged between 10 and 79 and we all enjoyed it.

This is my first bit of typing wearing varifocals - middle age has truely arrived. So apologies for any errors!

Joan - Good to hear from you. I looked out for you that night at the Museum of Childhod, but no sighting alas. Hope you are keeping well.

fab pictures as ever . And I so loved the adaptation of Great Expectations but nothing can surpass Bleak house ..

I was late getting to the knitting thing at the Museum of Childhood (keep underestimating the extra time I have to factor in for steps after the accident - and there are a lot at Bethnal Green tube) and so was right at the back. Met a couple of inspiring women one of whom was running a knitting club in a secondary school and the other one with what the nuns would have called 'Fallen Women' in South London.

Inspired by one of your earlier posts I made a very nice spelt loaf at the weekend - Bacheldre Mills flour since it's near where Pete's mum and dad live and so they often bring us flour from there. So thanks for the tip.

Missing long walks on crisp winter days - I'm still limited to about a mile. So I live vicariously through your posts.

I listen to Christopher Fowler's Bryant and May books on audible.com , mostly for the "Things You Didn't Know about London" bits . Always fascinating .
"The Water Room" (?) had a murderer in the old sewers round Kings Cross .....