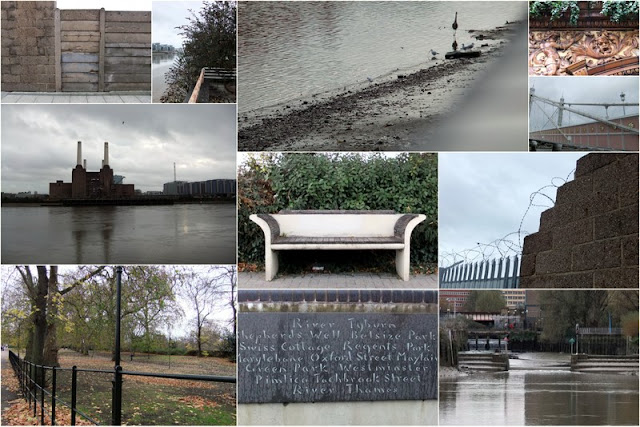 I am very much enjoying this wintry weather.  My self-discipline with the central heating at home means that a briskish walk has multiple benefits - a helping of vitamin D, free exercise, the excitement of new grounds to stamp, and a bit of a warm-up.  This weekend we tested the instructions for the last leg of Walk 2012 which runs from Putney Bridge to the Olympic Stadium.

It was one of those grey days that, if you are in the right frame of mind, can be soothing rather than miserable.   We took the tube to Putney Bridge, followed the route to the Thames Path passing pretty suburban villas; zigzagged along the path past breeze block walls, buddleias and concrete benches; looked across to Bell Creek where the Wandle meets the Thames,;  crossed at the river and found our way back to the river path, him ranting about the unimaginative modern architecture, and me admiring sand and gravel depots; had a long chat with a stranger about power stations and the Pre Raphaelites; and mooched past the pretty-in-pink Albert Bridge.  Once we were in Battersea Park we had to take shelter from the rain under an awning with a cup of tea.  We thought we might make it as far as Tate Britain without getting too wet, but still had time to stop to see the trickle that was the Tyburn meandering across the mud, and a heron paddling at the edge of the glittery, grey river.

I'm a little ashamed at how long it took us and that we took shelter without getting even half way, but that's what happens if you don't leave home until midday and spend too much time dawdling.  Even so, we felt we'd earned our cup of tea, a gentle mooch around the Camden Town painters, and the pleasure of finding my lost beret (in the shop) and my gloves (in the cafe).  It's the little things that make a good day.

We'll try to get up a bit earlier for the next stage.  Promise.

After the beating the central heating got last year I also decided to be frugal this winter. I submit my meter readings on line and a man came to read it the other day as I'd put in an 'unusual' reading. By that I assume he meant a low reading, and they thought it was odd!
However the snow has meant it had to be on for a couple of days this week.

That you could write "It was one of those grey days that, if you are in the right frame of mind, can be soothing rather than miserable." tells me we are kindred spirits. I find few people who can agree with the sentiment, but grey days can be blissful ... that jazzy sun gets far too much of folks attention!

And what evocative photographs. You almost make me want to live in the city. I suppose like bright and dull weather the town and the country are both to be lauded for what makes them unique :D

Annie has focused on the very line I found so satisfying ... a very pleasing sentiment and a lovely post :0)

I took a photo of a heron on the bank opposite Battersea Gardens when I was in London in the summer. Your photo (albeit from a different location) has got me wondering if they're a territorial bird and we might have seen the same one?

What a pleasure it is indeed to find kindred spirits!

Veep- I'm intrigued by the idea of heron territoriality. Apparently they feed territorially and that's why those garden pond dummies work, though some feed at multiple sites. And they nest "colonially" in heronries. I even found a research paper explaining why these seemingly contradictory characteristics are not so: http://www.jstor.org/pss/4857

So now we know.

I like the sound of your walk, and am inspired by your excellent tips re: self-discipline and central heating and adopting the frame of mind which can turn a dull grey day into a soothing rather than miserable experience.

I am glad the beret and gloves weren't lost, and that you enjoyed a dawdling pace. I hope the second leg of route-testing is similarly full of small pleasures, and that no shame is involved in taking the route at whatever pace your mood and the weather define!