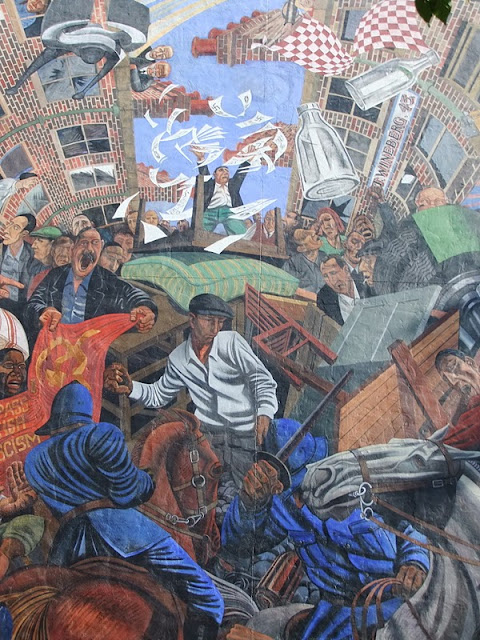 Sat 1/10/11:  Up early for tea and cake stall in St George's Gardens to commemorate the 75th Anniversary of the Battle of Cable Street.  The mayor unveiled a plaque on restored mural, said his bit then had his photo taken at the WI stall.  V odd.  Old docker reminisced and told me I looked a bit of a Catholic, with a touch of Irish.  Perceptive.  Great films and photos of Cable St, with one of clothes shop selling "misfits".  I'd love to sell misfits.
at 23:47

Marvellous mural. Am so enjoying your postcards.

Great postcard - we need these reminders.

We went to the States in the summer and found loads of murals and street art - a powerful way of learning what's important and distinctive to a district, town or city.

loving your postcards and this mural is stunning. I read up about the battle recently....a lot of women were very brave and marched with the men. Only been on one march myself but we got the government to change it's mind on an issue!!

I love it when people you don't know from Adam feel they can offer their comments. I was asked many times in Moscow whether I was White Russian? Never being entirely sure whether this is a good or bad thing I usually just fessed up to being English. Which often got a negative response of the 'Over here taking our jobs...' variety.