I very much enjoyed my week of sending postcards, and was glad that it got me back into the swing of posting.  Not that I have ever lost the habit of sending postcards - choosing exactly the right card, condensing a message into a limited number of words, hoping that it will delight the recipient, is a pleasure in itself.  It reminded me too that I was a collector of postcards as a child.  I'm not sure what initiated the interest, possibly the fact that we never went away on holiday ourselves, maybe just a romantic interest in foreign places (i.e. anywhere that was not Stepney) or possibly even a developing interest in correspondence, those little messages about weather, the food, seeing you soon.  The collection was never collated, just put into a rather nasty mustard-coloured bag I'd been give as a prize at school.  I was not fussy about what went in, and gladly accepted donations.  Even my primary school teacher Miss Brogan (think Miss Jean Brodie gets a social conscience) used to give me those she received from exotic places.  I got bored with collecting in the end, and it languished in a cupboard for a good while. Some were cut up for templates for a patchwork I made, then the whole lot were eventually tipped down the chute.

It was not the end of the deltiology.  I like to bring home and send memento postcards of days out, or things that catch my fancy and there is a little stash for sending on.  And of course I like to receive them to.  I walked round the house to see what was on display on our mantelpieces.

In the sitting room, evidence of a fascination with singleton shoes -


A favourite in the bedroom-


On the kitchen mantel -


And tucked into the dresser:


I'm impressed by the thought and attention that people - friends, family - have put into the choice of these cards. The Matthew Smith  was given to me because "That dress.  It's the sort of thing you'd wear".  And I'm amazed - and not a little moved - to find that "My Kitchen" has been on my dresser shelf for over 20 years, with a closely written and condensed snapshot of a springtime in Cornwall on the back: 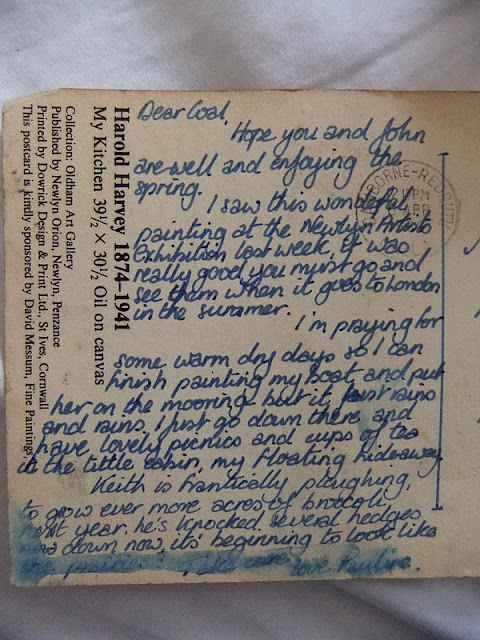 There is another collector in this house, only the post cards are much more organised, neatly arranged in albums and, for the most part, new and unsullied by the hand of the postmant.  When we went out with a friend recently I warned her that he would disappear now and then to look at post card racks. The collection it is carefully collated, occasionally rearranged, and rather a pleasure to idle through.  Particular themes emerge - deserts and stones;, architecture - Islamic, classical, rural and modern; walls, flowers, the green man, mazes and topiary; the nude; seascapes, lighthouses and boats; railways; a page of owls; sculpture; the odd hero.

"It's like having your own little gallery.  It gives me pleasure "he says.  It's a bit more than that I think - a little history of likes, gratitude, and affection.  Send a postcard today, I say.


*Deltiology - the study and collection of postcards

I love the fact that you collect postcards. Some real beauties too. I have a bundle stashed away in the bottom of the wardrobe, waiting for me to think of something brilliant to construct with them...still waiting!

When I cleared my parents' house I discovered they'd kept every postcard I'd sent them. Makes me a bit weepy even as I type.

I have a modest collection of vintage cards (unwritten). Mostly seaside, gardens and such. I also have two 'inspirational cards' tucked into my bedroom chest of drawers.

What beautiful cards ... I have a very modest collection tucked away, but haven't added to it in a very long time!

Thanks for the get well wishes ... I'm bouncing back now :D