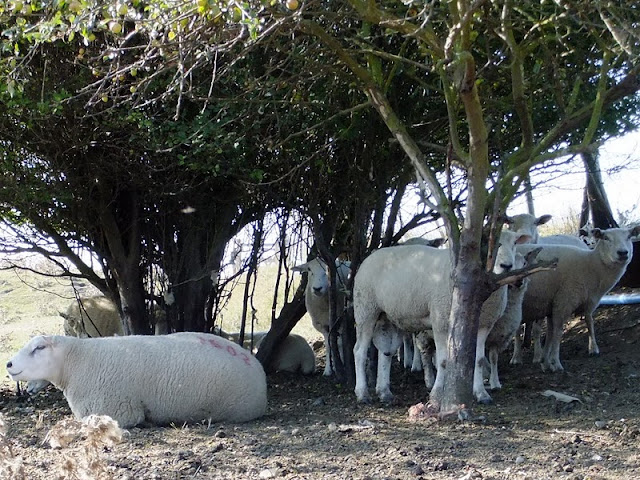 Thursday 29th Sep '11: Graveney Marshes -  So lovely it gave me a lump in my throat.  Stopped to pick some wild apples on the side of the road and found these sheep hiding from the sun. Very sheepy smell in their little corner.  Spent the day on the beach.  Never thought I'd be swimming in the sea at the end of September.  Mind you, never thought I'd be one to carry a camping chair to the beach to sit on.  And a flask of hot water for tea.  Life is full of surprises. XX
at 00:09 6 comments: 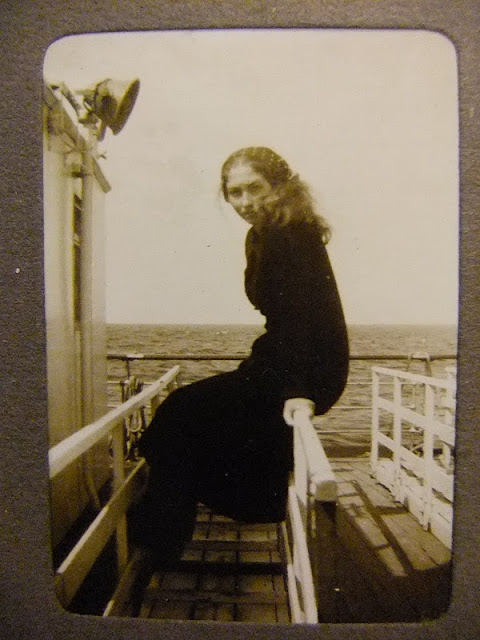 Wed 8th Aug 1973*: Our very own Festival of Photography and Fun on board the Balmoral - two tickets for £1 for afternoon journey to Porlock and back. Highly recommended along with "Parlour Specials" for jolly days at the seaside - a must for Ilfracombe. Outgoing journey a gay, breezy jaunt - binoculars looking everywhere.  Seaward side journey more interesting than landward.  Turning for home, sun went in, anoraks came out for a cold, choppy steam home.  Cod and chips twice was the shout when in port, home and dry! 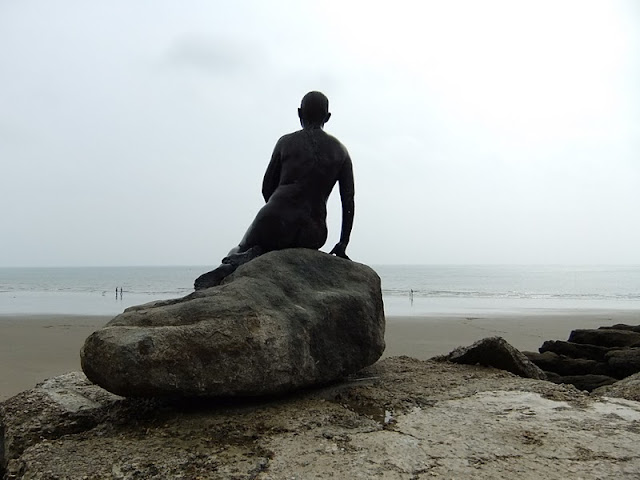 4 Sept 2011
Back to Sunny Sands to see Cornelia Parker's Folkestone Mermaid.  Sky of white cloud, perfect background for the human mermaid, her love handles and the slips of seaweed on her curves.  She is really rather beautiful.  Spoke to a local gent who was clearly very proud of it.  Thought  a child had lost a shoe on the quayside when I realised it was one of Tracy Emin's Baby Things. Listened again to Ms Parker on Desert Island discs when I got home.  Seemed most appropriate.  We'll have to make do with campsite I think.  Love Cx
at 00:43 4 comments: 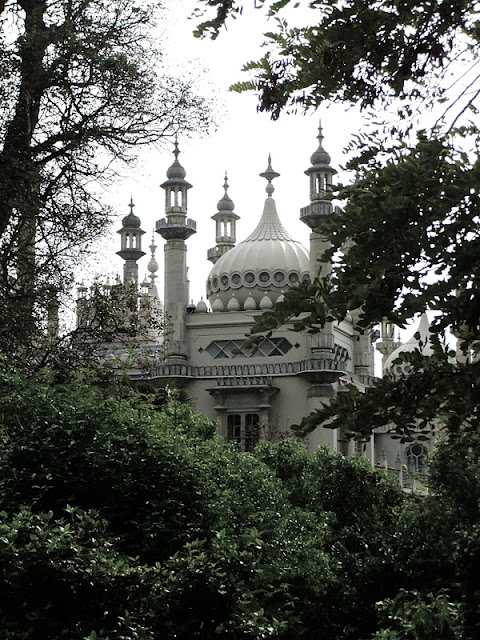 Saturday, 24/9/11:  Brighton by train (tenner return, total bargain) from London Bridge for the Radical Bloomsbury exhibition.  Colours gorgeous, painting unremarkable, designs desirable, Farrow and Ball paint background colours perfect. Great little museum. Had never seen the fantasy of the Pavilion before.  Unitarian Church monumentally down to earth.  Had to exercise restraint in Ditto Fabrics. Failed to do so in Farm Shop Cafe at teatime and sat on breezy beach for half an hour to recover.  Back soon.


A confession: I look at and listen to the weather forecast several times a day, almost to the point of obsession.  Nothing pleases me more than seeing that picture of a full sun or even the sun peeping from behind a cloud on those weather maps. I refuse to give in to talk of autumn just yet.  The windows and the back doors are flung open every morning to let in as much air and light as I can manage before I absolutely have to batten down the hatches.  I chickened out though.  I held out until the equinox and I was planning to hold on until at least the end of the month, but I just lost my nerve and opened a pack of 60 deniers yesterday.  I'm ashamed, especially because it proved to be a little bit previous - temperatures are forecast to be around 25 degrees here by mid week.  The outdoors beckons, bare legged, bike bruised and all.

To be honest, I can't quite understand why this summer has been so slandered.  Perhaps I suffer from that  memory loss that mothers are reputed to have about the pains of labour.  Yes, it rained, and so heavily at a couple of points that our old fashioned valley roof was overwhelmed and water dripped through our bedroom ceiling.   For the most part in my mind though, it was sunny intervals.  It explains my getting out of the habit of blogging.  When the weather's fine, I'm just desperate to get out and make the most of the light before the nights draw in and see what there is to be seen.  The other day, just along this little stretch of Mile End Park, I came across a young Bengal Cat running out of the bushes, followed closely by a bold young fox who just stopped and looked at me, by which time the cat had disappeared. Surreal.  Then there's all the bird action, lots of it, odd geese lurking on the side of the canal, parakeets squawking over the allotment, flocks of long tailed tits.  So I've been thinking it's time to revive the post-card, just for this week, to get back into the habit of writing here.  Just imagine you've found them on the doormat when they arrive in your inbox.
at 00:06 6 comments:

all about the turban 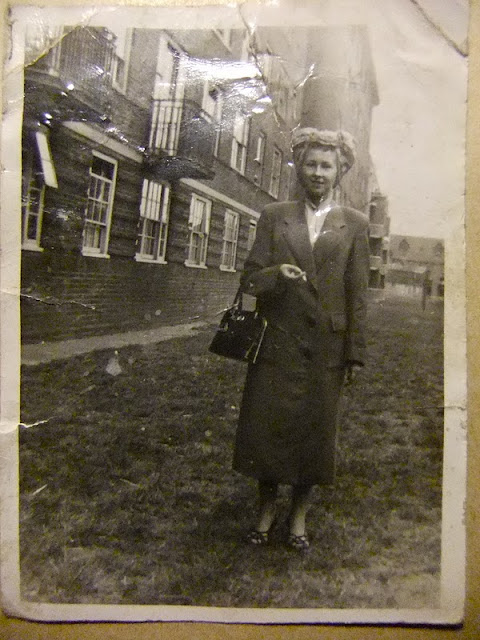 I am very fond of this picture of my mum.  I've been thinking about it since early this summer when I suddenly got a bit of a passion for turbans but just couldn't put my hand on it, then it turned up one day when I was turning out my cupboards.  There she was on "the grass" outside the flats where her dad, nan, granddad and six brothers and sisters lived (a couple were married and gone by then).
I love the way she is looking so directly at the camera with such frankness and confidence here.  She was young when it was taken, far too young to be smoking, but she left school when she was fourteen and, like most of her sisters, had started work in a local dressmaking factory. If you were to ask her, she would be able to tell you exactly where that tailored coat came from, its colour, and the fabric it was made from.  But what about that turban?  Look at the size of it, its exuberance, its complete "don't mess about with me" message. She looks so full of pluck.  She still is.
It was her birthday today and she declared that she had a lovely day.  We only had one candle on the cake, though.  I doubt if there would have been room for one for every year.  And she wouldn't have had the puff to blow them out after those years of smoking.
at 22:28 10 comments:

Email ThisBlogThis!Share to TwitterShare to FacebookShare to Pinterest
Labels: family, getting older 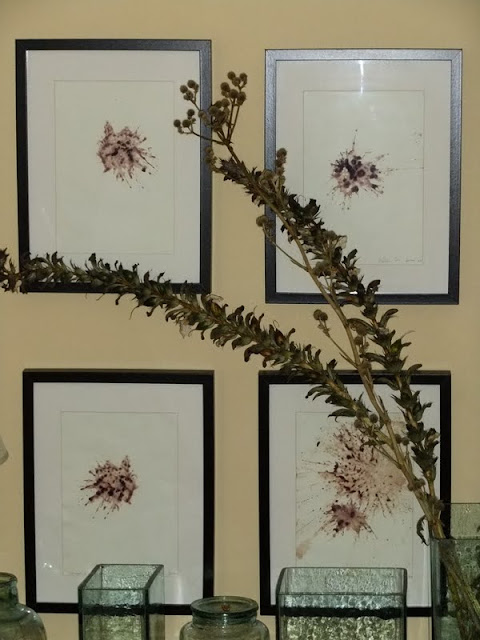 We've kind of been on holiday, which is a bit rich for someone who is on holiday permanently, but we have had lots of time out and about together for the last couple of weeks.   Some lovely times.  At the minute though I am sitting with my feet up under these very pictures.  Stephen Gill did them and they are blackberries, from Hackney, smashed with a hammer and preserved on paper.  It must have been very therapeutic making them.
Apart from one bottle of blackberry vinegar, they are the only blackberries in the house.  I'm fed up about that; that and having to go to the dentist tomorrow.  And also that I have been engaging in diversionary activity all day instead of threading up the somewhat intimidating industrial Bernina sewing machine I bought yesterday from a friend.
Every now and there are minor explosions as the dried acanthus fires seeds around the room above my head.  I feel a little under seige.  Maybe I should just go to bed and leave it till tomorrow to write a proper post.
at 23:06 7 comments: