i am tower of hamlets 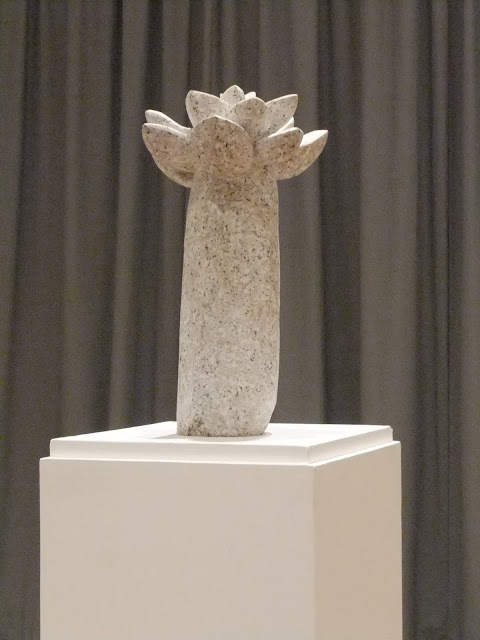 Friday night is normally a winding down and relaxing time of the week for us.  This week it was all excitement. We went off to Chisenhale Art Gallery to collect Amalia Pica's sculpture - I am Tower of Hamlets, as I am in Tower of Hamlets, just like a lot of other people are - to bring it home to stay with us for a week.
I'd seen the sculpture on the gallery's website and was looking forward to being able to get up close to it, to get its measure, to put my hands on it.  It is a very lovely thing, a pink granite echeveria, with all the strokes and marks that come with the fashioning of granite, extremely touchable.  We feel very honoured to be its first hosts, delighted that an echeveria has made its way into the home of a gardener who lost his own echeverias in this last cold, cold winter; and a little apprehensive.  I mean, how fragile is a block of granite in a house with two adults and three cats?  And will we be able to safeguard it so that it can continue its journey around the borough when we have to hand it over to its next home?  Because this is a nomadic sculpture.  At the end of the week we will put it carefully into its specially crafted wooden box-on-wheels and hand it on to another host in the borough.  And so it will go on for a year until it is returned to Amalia with a list of the hosts. 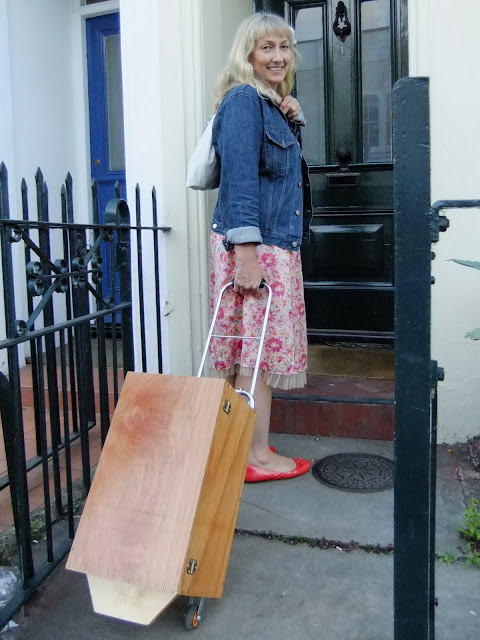 It's worth reading Amalia's description of how she came to create the event that is the nomadism of the sculpture, its passing from house to house, as part of the "Sense of Place" project she has been working on.
I remember the school pet in 2nd grade, and how exciting it was when it was my turn to take it home. My poor dog felt a bit displaced. There was something so different about taking care of something for a limited amount of time. I also remember ‘The Mary’. It was only an object, plaster shaped to represent the Virgin. Members of my local church in the Patagonian Desert would pass it from house to house, and host it for one day at a time. My family was not part of this tradition, but I would have liked to host The Mary. Not for religious reasons, but I wanted to host IT, as if there was something about its thingness that would inundate the house. It occurs to me now that just as I did then - I believe in the power of objects. I believe they can make things happen. But I wouldn’t have wanted to have IT forever. There was something about having what other people have had and what other people would have after me, to be part of something bigger by holding this thing which had become so much bigger than itself, simply by being in all these different places. I only ever saw The Mary in the final procession, the day it came back to church. I was skating on the street and saw it going inside. I wished to know all the places it had been to. Did IT collect memories of those places, from homes that were just front doors to me?
The passing on of objects from one place seems to me an altogether good thing.  Or the re-creation of new objects from old, like taking old fabrics and making new things from them.  Fanciful it may be, but I like to think that materials can take an impression of a place or time and hold on to them.  I'm also very taken with the concept of creating a sense of place through this nomadic sculpture.  At the micro level, this has come down to deciding quite where the sculpture should stay.  We wanted it in a place it could be seen properly and admired at its best.  We moved it around to different rooms trying to find the best place.  We decided in the end that the kitchen mantelpiece was the best place because it's the room we most use. 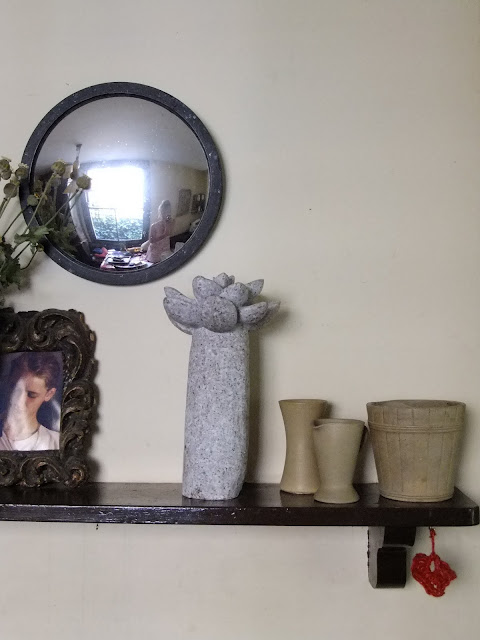 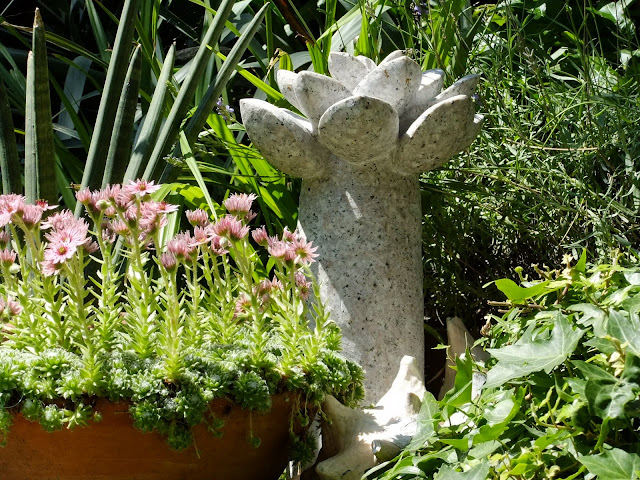 ... in a place where we might be able to look down on it too. 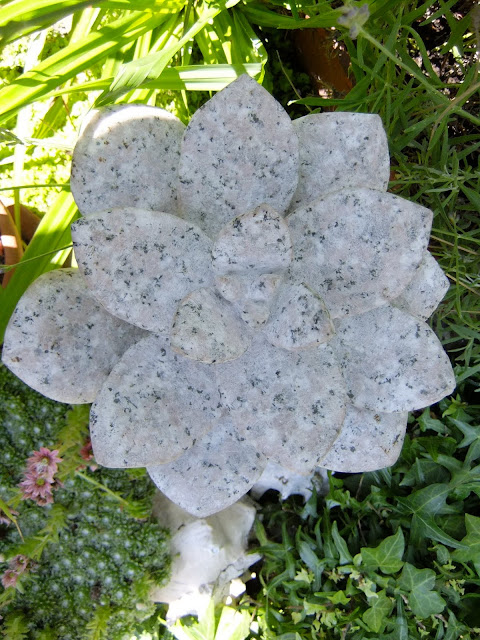 It might be moving again, because I think it should have at the very least a tea party to celebrate being in this particular place.  It is nomadic after all.
at 15:20

What a lovely idea. I think the sculpture looks wonderful in the garden setting.

That is just the most wonderful thing. Me, I would spend the whole week staring at it, straining to ensure that the shape of it was imprinted on my memory before it was passed on. Enjoy your week with such beauty, and the tea party !

What a wonderful idea. I definitely agree that materials seem to take an impression of a place or time and hold on to them - surely that is one of the reasons why we love antiques and vintage.

How great, roving sculpture. If Jeff Koons ever joins in, I'm putting my name forward to have this for a week (though we'll need to move house first):

Very appropriate, particularly in the light of the sad loss of your own plants. Was it random that you were the first hosts, or did some other factors come into play? I get the impression this sculpture is going to be visiting every room in the house during the week - and hope you'll be recording its journey!

Oh yes, I love this. We've been looking for a garden feature (can't find anything that's at all interesting) and a bigger one like this would be fantastic. Lucky you to have it for a while!

@knit nurse - I think it was completely fortuitous that we were the first hosts. East End WI volunteers at Chisenhale's coffee mornings for parents and it was there that I was asked whether I was interested in looking after the sculpture so my name went down very early.

The sculpture is lovely, and it looks fab in the garden .

What a marvellous idea ! And lucky you to be the first . I agree , it looks wonderful in the garden .
I remember the perambulating Virgin from my childrens' school days in Spain. It had a collecting box in the base and the host child was supposed to go round rattling it at the neighbours . I'd always forget and fill it with loose change hastily on Monday morning .The nuns probably thought our street the meanest in town !