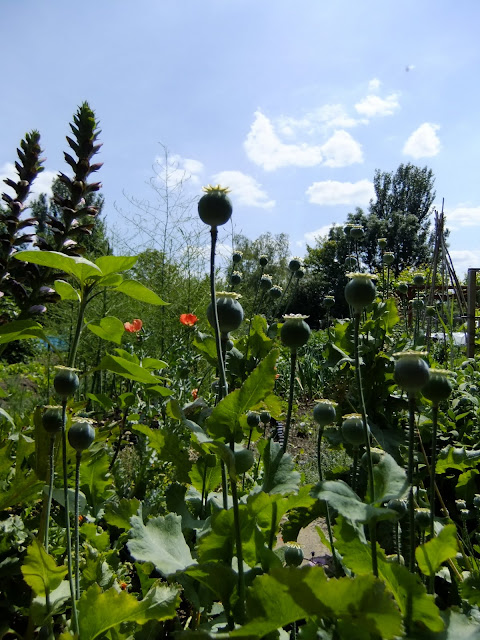 When I left the dentist after my root canal on the last really sunny day this week, she suggested that I do something nice for the afternoon to take my mind off the pain, so I went to the allotment to see what was going on and sit in the sun.  A much better option than a couple of ibuprofen.

Now vegetable growers will be familiar with the concept of the "hungry gap" at the end of spring when the brassicas  and chard are finished and nothing else is quite ready And then there's the aptly named Hungry Gap kale which I've flirted with but had not had the foresight to sow.  Not that it would have made much difference.  Even though there was plenteous asparagus and a good showing of cut and come again lettuce, so much of what I sowed never did grow because of the lack of rain and insufficient watering.  So I was delighted to see how much everything had come along while I had been galivanting elsewhere - hollyhocks and acanthus in bloom, the beans starting to climb the wigwam, a row of beetroots plumping up, courgettes not quite ready to cut (and probably the size of marrows when I go to cut them later).  Even the weak looking rhubarb I had dug up and replanted at the wrong time of year looked like it might survive.

I lounged in a deck chair ignoring the weeds and poppy heads until the enforced fasting and sun made me a little giddy.  Which is probably why I reversed into a lamppost on the way out of the car-park.

Oops! Still, better a lamp poet than someone else's car!

What a perfect antidote to the dentist (apart from the lampost, of course!)

How maddening, I hate it when you can't blame anyone else!
Love the new look over here by the way, especially the bigger pictures.

"Ouch" seems an appropriate comment to leave in view of endodontic treatment and altercation with lamppost. Hope you've recovered from both.

We now have a white stripe on the bonnet of our car where Pete - in an attempt to provide me room enough to get out of the car on crutches - drove too far into our drive and bumped the front stone window surround. Even his normally judgemental father acknowledged that this was forgivable in trying circumstances - just as your prang clearly is. We are drowning in Glen Ample raspberries - we've had clafoutis, lemon and raspberry muffins, raspberry ice cream. Its wonderful!