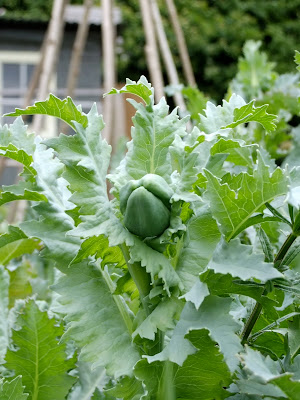 It struck me last week that I was spending a lot of time just waiting for stuff to happen.  I'd arrived at the dentist to be told that she was running late, stuck in traffic.  Not quite true.  In fact, after waiting for an hour, I was told that she had a rather distressing domestic emergency and would not be coming at all.  Which, after psyching myself up the night before for a hideous visit, was quite a result (apart from the fibbing by the receptionist.)  So, I took myself off to the allotment where I spent some time pondering, in particular about how it is the gardener's lot to spend a great deal of time in glorious expectation of the life to come.  Take the poppy, for example.  It stands around tempting to you as it grows to bursting point, you turn around for five minutes and it's open and blown away in the wind.  Not a bad thing, because they really should not be there anyway as the bed they are on is destined for less ephemeral plants.  Unlike this horned poppy,s sleeping in the right bed, which we have been hoping and waiting for since we brought the seeds home... 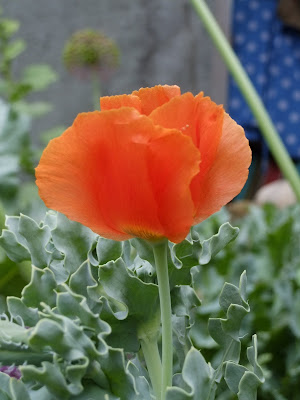 Then there's the asparagus bed.  You wait for three years before you can get cut a decent crop, and before you know it, after a brief surfeit of spears and delicious meals, the season is over and you are left with the ferny reminders of how wonderful it all was.  After which you wait for the asparagus beetles to descend and the slaughter to begin.  Then there's the literal and temporal gap between planting your tomatoes and courgettes and waiting for the spaces to fill with fruits - oh, how hard it is to resist the temptation to plant them too close because you can never quite believe those plants will sprawl across a whole square yard.

But most of all this year, the waiting has been for rain.  Real rain that fills the cracks and makes you and the  earth seriously wet.  Rain that stops you from ignoring domestic and other duties and makes you want to stay indoors and sew instead of galivanting off to the seaside or out on the bike.  Rain that scents the streets with that lovely damp-dust London smell.  Rain that makes the plants grow. 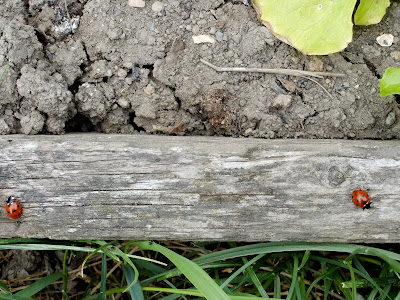 The forecast is for heavy rain tomorrow afternoon.  By Saturday I'll be waiting for the sun to shine again.

Yes, well, you know it's different here! But I remember in Moscow when it was awfully hot and humid, waiting and longing for a thunderstorm to break it a little.
Pouring down here... I'm willing some of it your way so your allotment gets a treat.
(Your dentist trip sounds like my hospital appointment, where the doctor never turned up...)

It rained! A few seriously heavy showers, cleaning the windows and leaivng that lovely freshly washed scent in the garden.

You certainly got your wish for rain! Now lets wish that it rains frequently but only at night!!

Ah, Lesley. If rain was only at night.. Actually we have not had that much here because we are on the east side of London. But to be honest, sometimes I quite like a day of rain so that I can stay in and play, fulfill promises to make/ draft/mend or, maybe one day, even read a book.

Thanks for dropping in.