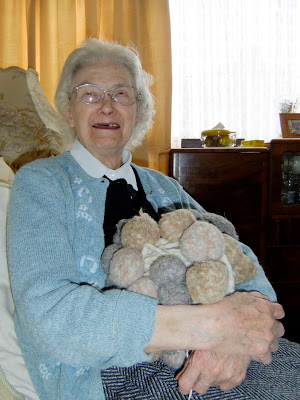 Every time I see my Aunt Lily she tells me I'm getting bigger.  But my mum says it's not me who's getting bigger, but Lil who's getting smaller.   And without being defensive in any way, I think it might be true.  I mean, look at the size of that ball of yarn on her lap.  To be entirely fair though, it is a rather special ball - Prick Your Finger's Pom Pom yarn.  I'd seen it, thought about it, looked at it again and was finally swayed when Rachael said it reminded her of stones on the beach. How could I resist? 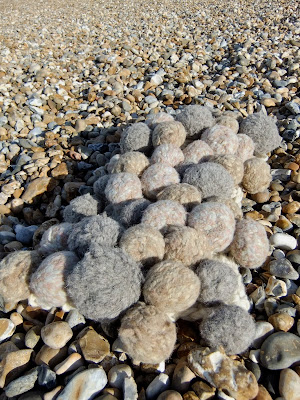 ...Rachael was right!  Forty one prime crocheted pom-pom yarn camouflaged as beach.  I had planned to add a back to the crocheted work and make it into a cushion, until I realised that it was already.  So after all that work with a giant hook, I rested my head on the woolly pebbled pom-poms and had a five minute snooze in the late afternoon sun.  Then I lay down on it and used it to massage my sore back.  Let me tell you, it was a most satisfying end to a solitary, sunny and indulgent day and, what's more, I have a lovely piece of woolly beach to enjoy until those pom-poms are worn out.
at 23:48

Don't move on to plastic.

Glad they didn't feel like pebbles as well...
Sadly, I am not shrinking.

My daughter and I agree that your Aunt looks like one of the grannies who knits Shreddies!

I think Bethnal Green needs a huge pebbly beach . And we all need lots of smiley aunties .

I've got one of those aunties (4'11'' when she was last measured). As we are a family of giants, it's like visiting a Borrower.

It's PERFECT! I love how it looks on those pebbles, on the beach.