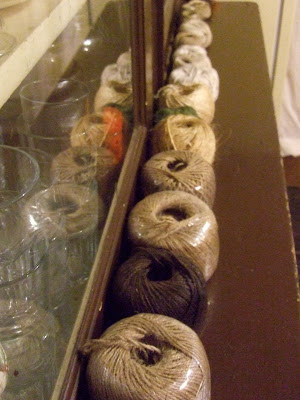 When I got home from my play-reading group last week (such a good night, must write more about it),  I found lined up on the dresser what appears to be John's domestic string collection.  I say domestic because I know for a fact that there is more in the allotment shed, including some beautiful red string he procured at the Garden Museum, and, no doubt, yet more in his various hiding places at work.  He says he was looking for a connector for the bike pump but once he started to investigate the gulag on top of the cupboard, discovered he had collected more string than he realised.  I point this out not to mock but to demonstrate the irresistibility of yarny things that come in a package of neatly wound comforting roundness.
I happen to be one of those people that finds it hard to throw away leftover string or, come to that, anything that isn't very obviously rubbish.  But increasingly I am itching to minimise the amount of clutter in my house.  Deciding on a minimal Christmas, then seeing the exhibition of John Pawson's work at the Design Museum and the film Of Gods and Men, beautifully located in a spartan rural monastery in Morocco, amplified the attractions of a clutter-free existence.  So until I manage a purge of sufficient force to actually get rid of some of the matter round here,  I'm adopting my own attempt at supersymmetry - one in, one out.
That's the theory.  If anyone has any more practical advice, I'd love to hear it.
at 00:00

Email ThisBlogThis!Share to TwitterShare to FacebookShare to Pinterest
Labels: too much stuff

If only... I try, I really do. But there are just some things I can't resist. I know if the house were on fire I wouldn't miss any of it. You're a collector or you're not. And I love that brown string, I would have to have that if I saw it...

I share your dilemma, which is why I use freecycle so much. I can declutter but don't actually throw it away, just send it on to a new owner!

When I opened this post I thought you'd been to the Monster Supplies Shop in Hoxton - home of the Nick Hornby supported Ministry of Stories:

In there it would be labelled and sold as fang floss for monsters. They also sell human snot (lemon curd), tins of collywobbles and heebie jeebies and much else. Worth a visit if you're at the Geffrye any weekend - its a five minute walk from there.

One in, one out is the theory in this house, too. I find it helps to have an 'outbox' somewhere that can be scooped up when we are going near a charity shop. I won't pretend we stick to it, though, especially when it comes to books ...