reasons to be cheerful 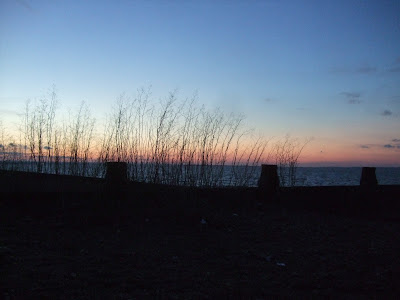 I have been longing to get to the seaside for ages.  We tried a couple of times over the holidays but various mishaps prevented us - losing my specs (found by my son three days later in the gutter outside the house with one lens missing); losing the car key (found four days later under a cushion on the kitchen chair); being generally hacked off at losing things all the time; and then having to lay on the sofa for a day in shock after shelling out for two new pairs of specs.  But we got there today, a day when the temperature soared to balmy nine and a half degrees C, the sheep were out on the marshes, the tide was in, and the sky cleared enough in the evening for a beautiful sunset and a glint of crescent moon.  It was a day when the gods of thrift and geekery smiled down too - a toasted tea cake that actually tasted of spices; from a charity shop, a hand-knit sea green aran cardigan for me (no more feeling cold when I'm too mean to turn on the heating) and some new candy stripe cotton sheets; a book of Henry Moore's drawings and a half-pint glass for John; three pounds of Seville oranges for a marmalade fest.

Before we started out for home, we sat on a wall at the top of the hill overlooking the sea and listened to several robins singing in the trees, presumably marking out their territories.  It put me in mind of Felix's wondrous balm for the soul mixdown of bird song. 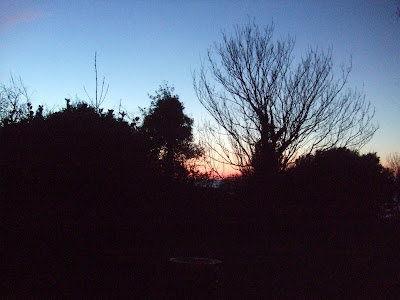 And for a totally indulgent end to the day, we had a home-made all-day breakfast, a glass of beer and an evening of Sherlock Homes on Radio 7.


Sometimes it does not need very much at all to make a good day.  Now all I have to do is to make some space for the haul, which is another story altogether.
at 23:44

Email ThisBlogThis!Share to TwitterShare to FacebookShare to Pinterest
Labels: seaside joy, too much stuff

What a glorious day you had and reminded me to make the effort to find seville oranges this year!
In the last couple of days I have noticed the sound of birdsong raising my spirits on the cycle ride to and from work. This must mean that spring is on the way......?!

Funny how we get these urges to see the sea. (One of the advantages of living near the NE coast is being able to satisfy said urges very easily!). Shame about the specs. I lost mine the other day, until I realised I was wearing them.

I was feeling cross when I arrived (too much washing to do in too little time in too cold weather for drying) but I feel more relaxed now I've read this.

That sounds like my kind of cheerful day, too - and all the more precious in the middle of dark winter.

I need new glasses also (can't read at all without them now...) and am dreading the bill. I can't understand why they are so expensive.
I also long for the coast from time to time, but it's a bit more of a day out from here, so only gets fulfilled occasionally.

I have to agree about the malaise-inducing shock of shelling out for specs. I was amazed by how expensive my last pair of pairs (Specsavers were doing 2 for 1) was...

Were the Henry Moore drawings his beautiful sheepy drawings? I love his sheep.

Thanks also for the kind mention of the birdsong mixdown... I am always amazed by how active the birds are at dawn and dusk. Such noise.

Thanks for reminding me of the ingredients that make for a perfect day... the seaside always helps.

That sounds like a lovely day, the Sea has the same effect as Mountains for me ..the very grandness of them puts life back in proportion somehow.
I love the idea of a few nice things purchased, but not feeling like you've over spent and to conclude the day Sherlock Holmes on the radio how lovely.

Sympathy for the specs..I need to use industrial cleaner on my contacts..and I still have to wear reading glasses which I cannot get used to and lose with depressing regularity...I shall go off and listen to Brian Redheads Christian Centuries and have a cup of tea :0)

A gorgeous day , full of very cosy treats . And lovely photos too .
As for the specs? I refuse to put mine on a chain since I heard two old dears chatting about how a friend's had fallen in the loo and she , flustered , had flushed it .