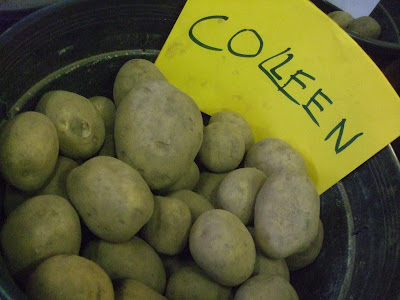 When I first started to write this blog, I wrote fairly regularly about my allotment.  We'd only just moved there, it needed a lot of work, and still does to be honest, and it felt like a considerable challenge to get the soil in some sort of decent condition.  As time has passed, I've written less about it and have gone beyond the point where I'd get excited about the arrival of a new seed catalogue. These days I'm more likely to buy my seeds in Lidl and my seed potatoes in Homebase.  Shocking.  That is until I discovered  a Potato Fair in South London, a short train ride away on the wonderful London Overground line from Dalston Junction to Crystal Palace.  It was just what I needed to drag me away from a comfy sofa, a nice fire and an afternoon of snoozing.

It seems to have been quite a while since I was thrilled by boxes of spuds and seeds for sale, but this event, held in the unprepossessing surroundings of a 1960s school hall, had quite an infectious atmosphere largely because of the enthusiastic stallholders and punters.  So now I find myself the owner of a three rhubarb crowns, three Marco garlic bulbs and a dozen packets of seeds, some I've never tried before - Blue Ballet Pumpkins, Black Beauty Courgettes, Applegreen poppies, Rio Grande tomatoes, as well as some old favourites.  Across the room there are rows of egg boxes I've filled with chitting potatoes. Sixty one little spuds, ten different varieties, some sensibly chosen for blight resistance (Winston, Lady Balfour, Sante, Edgecote), others because I know they taste good (Charlotte, Epicure), like their colour (Highland Burgundy), or because they are prettily named. (Orla, Druid, Yetholm Gypsy). 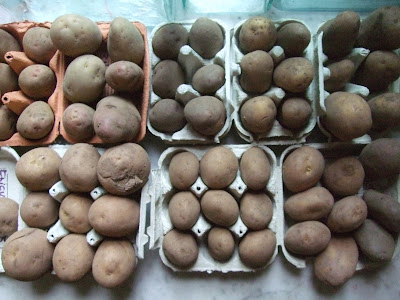 I'm off the couch, out of my rut and looking forward to spring again.
at 09:40

Oh those names ... we've been on an allotment waiting list for three years and I am SO looking forward to being able to grow lots of unusual varieties of veg.

Oh gosh that sounds like fun..I used to Garden but at the moment the growing season is given over to adventuring..it's such a short intense season it doesn't allow time for both but I do miss a garden
Those spuds look brilliant

It's along time since I grew potatoes, but i might just join you this year. I really enjoyed the courgettes last year so I think they'll be on the agenda as well.

You have been busy. Surprisingly, I managed to grow spuds in three big bags last year so might have another go. I keep buying packets of seeds but then forget to plant them.

Husband's a late arrival to the rhubarb crumble fan club but now loves it . Before he'd mostly eaten it as a compote with meat , the Dutch way. I just love the colour it goes when stewed !
That's going to be a very impressive potato crop ....

We've recently given up our allotment so reading this is disconcerting. I have to content myself with being excited on your behalf. There are names new to me here. It will be interesting to hear how they do and how they taste!

P.S. Thanks for following my Esther's Boring Garden Blog

Springtime, yay !!
We're planning to grow potatoes this year - it has to be in pots as we've not much space for veggies in the garden. We're hoping for an allotment one day ... when we slowly creep up the waiting list!
Thanks for visiting my new blog and for your comment,
D x