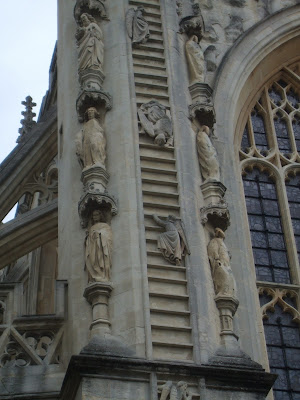 Angels are making an early appearance in the Advent calendar this year, courtesy of a trip to Bath this week with my friend Elizabeth.  It was only the second time I'd been back since I was at university there and it was good to see some of the things that I'd had a minor love affair with when I was eighteen - the goldenness of the city, some lovely rusticated stonework on the bridges over the canal, the river running under the shops on Pulteney Bridge.  I'd always been especially fond of Jacob's Ladder on Bath Abbey, those angels climbing their way heavenward, and sometimes coming a cropper.  Too much sherry perhaps while mixing the celestial christmas pudding.
at 11:59

Great to see that you are putting up some advent pics....so am I! Love this one.

I've only been to Bath once a long time ago to the Morris Minor centre. Where my poor vehicle was pronounced a 'death trap'. We never made it into the city.

Bath is one of my favourite places and I particularly love the Jacob,s Ladder. I'm enjoying your Advent calendar.

Never been to Bath. Love the idea of angels mixing a pud on high. (Incidentally, I'm not at all fond of climbing ladders, sherry or no sherry).