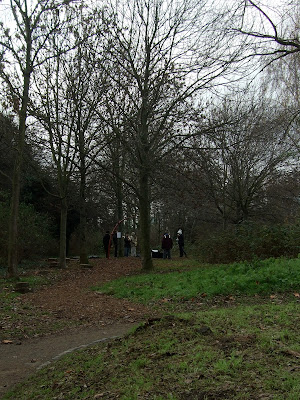 Not the Von Trapps, but a little band of musicians practicing in Mile End Park under the trees.  I was cycling home from the market on the other side of the railway when I heard music and could not figure out where it was coming from.  I followed the sound, under the railway bridge and into another entrance when I spotted them.  As I was taking a snap, a young woman, reminiscent of the White Rabbit, rushed by with a box towards the band.  What was in the box?  And who were the mystery band?

Later that day, having a cup of coffee outside a cafe in Blackheath,  I heard the unmistakable sound of  a Salvation Army Band playing carols, a sound which for some unfathomable reason always makes me a bit weepy.  Christmas can do that to you, I find.
at 23:39

The Salvation Army were playing in Manchester. Excellent selection of music, very well played.
I think Christmas can be very overwhelming, there's so much pressure to have a perfect (fantasy) time that can all get a bit much.

Oh, I was waiting to know the answer. Will you ask them next time you see them?

My thirteen year old son plays trombone and among many musical activities plays in the Newham Academy Brass Band. On Rememberance Sunday they played at the Cenotaph in East Ham and since then it has been carols all the way - lights switch-ons, playing outdoors (fingerless gloves a godsend) and traditional concerts. So far my upper lip has remained stiff but I don't fancy my chances this weekend when he plays at the City of London Crematorium. Fingers crossed that I won't embarass him too much.

My eldest son Jack got roped into playing a tiny trumpet at Felix's brother's 30th on Saturday - her entire family turned up with various brass things, an accordion, a bass guitar and a piano - for an impromptu carol singsong. I couldn't play a rubber band stretched over a shoebox, but unluckily for everyone else I don't mind singing enthusiastically and loudly :-)

I know what you mean about aspects of the festive season causing tears (not that it ever takes much to set me off). It's years since I heard a Salvation Army band in these parts though as kids we used to follow them round our locality every Sunday.

"O,Denneboom"("O , Tannebaum") makes me slightly weepy , especially when sung by children . Which is odd , since it shares its tune with the Red Flag .
But standing outside on a chilly December night with the stars twinkling , all carols are perfect .

Nice to know I am in good company.