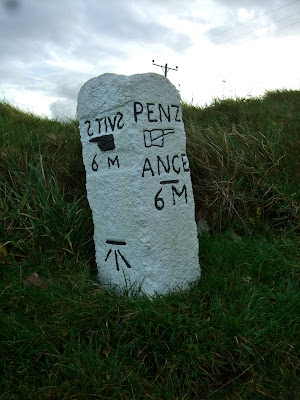 Is there any other county in the country that has such a healthy respect for the letter Z than Cornwall? It's littered around the place names - Zelah, Zennor, Penzance, Marazion. Polzeath.  It  might even be the defining sound of the accent.  So it's with some pleasure that this alphabet comes to an end just down the road from Zennor.
We travelled down by train (deals for the ageing be praised, and thanks to the 205 bus to Paddington on tube-strike day) and caught the bus from St Ives to our B&B at Gurnard's Head.  The death bus.  Or at least that's what the bar staff called it. I simply sat back and enjoyed the adventure - whizzing down serpentine lanes, climbing up into the mist on the moors with the sun disappearing and a smattering of rain on the windscreen, feeling like I was in some black and white horror film from the fifties.  It was a real delight for me not to have to drive anywhere and a great discipline to stick to the bus timetable knowing that we had to shift ourselves to pack everything in before the last bus at tea-time.  And there was no mobile phone signal either.  Very Wuthering Heights.
The next day, sun threatening to break through the grey, we walked to Zennor along the well-kept public footpaths, over the granite stepping stones and stiles, counting the flowers still in bloom - tiny blue flowers that looked like scabious, campions, brambles and gorse.  In the church, we checked out the medieval mermaid's chair, the needlepoint hassocks with their dedications on the back, and the angel sundial on the wall.  We flipped a mental coin and took a chance on continuing towards the coast path and into St Ives rather than the bus, knowing that you can add at least another 50% to the estimated distance once you have taken twists, turns and contours into account.  The sun came out, my coat came off and we climbed up and down the (not very well signposted) cliff path until we turned the corner at Porthmeor Beach; surfers in the waves, Tate St Ives, a bottle of delicious tarte tatin tasting Cornish Orchards blush cider  and we were ready for Peter Lanyon, so apt after a morning walking through the Penwith landscape. 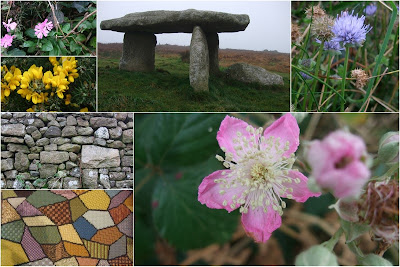 Before we came home, and thanks to some kind friends, we fitted in a visit Penzance in the showers, acquainted ourselves here with unfamiliar painters and Alec Walker's Cresede textiles (fabulous blog!).  We sat and ate a pasty on the sea front at Newlyn watching the swans, thought about reading Metamorphoses, then walked through the mist, back thousands of years, to Lanyon Quoit and Men-an-Tol. 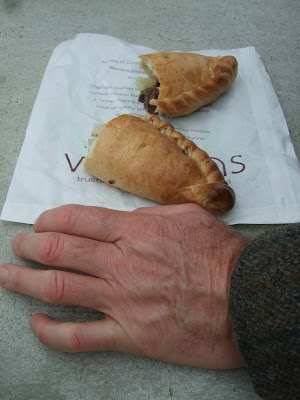 When we got home we cracked some zeds in the perfect bed, our own; and reconciled ourselves to winter coming.
at 12:00

A worthy end to the alphabet! I envy your late-year out-of-season break, often they are the best and any sunshine warms the soul more than usual when it's unexpected!

Cornwall , and Zennor in particular , will be overun by your readers next year ! It sounds gorgeous .

I really enjoyed your Yuccas too, and the whole alphabet has been a beautiful journey.

Zennor looks gorgeous and you are right; Cornwall have the edge on the rest of the UK when it comes to the employment of the letter Z in place-names.

Credit to you for travelling all that way for a good Z! That pasty looks good as well.

A brilliant conclusion to your alphabet posts. And well done to your bus driver.

I very much enjoyed a visit to the Foundling Museum exhibition, as mentioned in your blog recently.

A really interesting post...I've never been to that part of England but have bumped into it in books..you all make it sound lovely!

Beautiful post - and all the more poignant for the state poor Cornwall is apparently in at the moment. What a land. I love it there, and I love the Cornwall pride which is so abundant, too.
The death bus - yipes. Still, there are worse places to spend one's last moment than whizzing down misty serpentine lines.
Am now imagining how Wuthering Heights might have played out if they had had mobile phones, and am reminded of this which I saw recently. You may be amused too...

Did very much enjoy this.

I have Cornish relations and Cornish memories and was remarking only a couple of days ago that it must all have changed so much since I last visited, I no longer know it at all - but those Zs have brought lots of stories to mind.

Hello C! I am just emerging form the tunnel of recent weeks and I am going to read your alphabet backwards . . . and enjoy every post.

This particular post bought back so many memories, as my late husband was Cornish. We visited Cornwall every year, so that he could rediscover his inner Celt, and went to Zennor many times, on one occasion on a bit of a D H Lawrence pilgrimage. (He and Frieda lived briefly in a cottage there - but he hated the place and the locals!)

When we first went to the Tinners Arms at Zennor in the 1970s, they used to serve bread and cheese lunches on old wooden platters. But, by 1983, there was not a wooden platter to be seen - they had all been stolen by customers. Sad but true.

I love all the legends connected with that area; when we went to Men-an-Tol, my then very young daughter and her friend insisted to crawling through the hole anti-clockwise seven times to ensure that they didn't succumb to rickets . . .