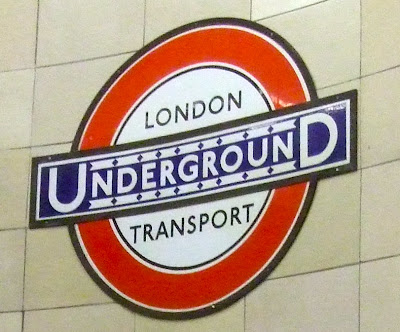 A few days ago I had to catch the tube during the rush hour and was stuffed in a carriage along with dozens of other commuters. A period of abstinence does make you realise how amazing it is that millions of people are transported everyday under London.  If you are lucky enough to get a seat you can look round and see all sorts of little stories going on - people absorbed in studying; reading newspapers, novels, bibles; listening to music or playing games; crossword puzzles being solved; serious napping, sometimes snoring; pets on display (I've seen pet rats and pythons); arguments;  doe-eyed adoration; occasional knitting or sewing; families on half term outings; tourists looking perplexed.  You can read poems on the underground or be entertained or harassed by buskers.  You can wonder at how there can possibly be so very many different permutations of noses, eyes, hairstyles so that no two people ever look the same.  Or you can just sit in your own little world, a hiatus between where you've been and where you are going, with nobody to disturb you.  It's often warm, occasionally windy, and sometimes wet - I'm sure there is a stream somewhere in Shadwell station for there is the constant sound of running water.  There have been the most horrendous tragedies, but for the most part, the underground is just buzzing with something that is London all over.

wonderful words, and all so true! i hardly catch the tube either and it totally overwhelms me every time i have to. there are always such characters and you're just all piled in together, and everybody finds their own way to pass the time.
good thing we don't use it too often, though, or it'd lose its novelty. i never used to notice anything much when i used it every day- i just read my book, mostly, and got so used to the experience of being crammed in with all my fellow londoners that it, and they, were no longer anything remarkable at all. shame, really.
THANK YOU FOR THE BOOK! It arrived a few days ago but i've only just picked it up - it's just marvellous - thank you!! I am already a-plotting about what to make from it, and I do love the way she writes. Thank you again!

Jane - so glad you liked the book. I hope it brings you hours of fun.

The underground was the thing that hit me as being most different from where I lived when I made my first visit in the 60's. I was on a school trip (the journey took hours and hours on the train from here in the north east)to the women's international hockey match which was followed by a visit to some food exhibition. I was only on the trip to see London. I hated hockey.