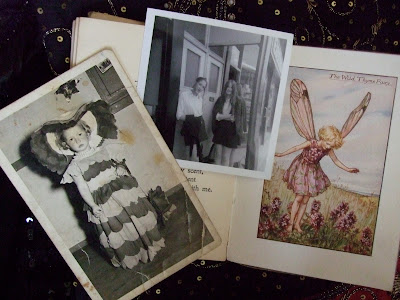 Skirts, skirts skirts.  Made of paper, silk and metal, swishy net, ruffled chiffon, cotton and linen, wool, tailored, flouncy, full.  I do love a skirt.  There's a favourite black linen skirt with embroidered circles on it, very Mexican looking, full and lovely for prancing, but now falling to bits.  I've mended it so many times that it's only really fit to wear in private.  It's now my about-the-house-and-plot-to cheer-me-up skirt.  Then there's a floor length skirt made of silk woven with metal so that it stands out looks like crumpled paper, almost rocky, just short of fancy dress and only to be worn on special occasions like weddings and May Balls.  And skirts yet to come that will be made of neatly folded scribbly patterned woolly fabric.  It will be my Jackson Pollock skirt.
You only have to look at the pictures to see where this love of skirts came from.  A mother who bothers to make fancy dress from crepe paper with nail scissors and borrowed needle and thread while on holiday must surely have passed on respect for dressing up.  And how about the fantasy wear from Cicely Mary Barker's Flower Fairies?  No wonder that one of my dream skirts would be covered in crumpled silk roses.  Or maybe look like a dahlia.  Or any of the flower skirts that Esther examined. As for nightmare skirts, well surely the teenage mini-skirt, folded over at the waist, would bring a shudder to most middle age sensibilities.
So it was that we had a lovely time reading about your dream and nightmare skirts - the tales of skirts glamourous, colourful, flattering, evocative; or nightmare patterns, demanding, tacky skirts. I rather fancied a bag made from Stan's psychedelic curtains and might even ignore then ironing if I could have the wonderful architectural Issey Miyake skirt that Joan chose.
In the end, rather than pick a name out of a hat, I asked a non-bloggy friend to judge your comments with clear instructions that she was not to look at any of the links to blogs.  This is what she said:
"I have read all the [comments] several times and interestingly on the first read, only one conjured up something tangible. The others I only really envisaged on the second read and I wondered why. I think it was the words swish swoosh that did it. Then the feeling of buttons digging in confirmed it. Jane had really thought about the task and then made me feel as though I was actually trying the skirts on. Gosh I do sound teacher like!"
So many, many thanks to you all for sharing your skirts and congratulations to Jane on winning the Eithne Farry book. All I need is an address to send it to, please.
at 23:26

thank you thank you!
and isn't that ruffled chiffon skirt incredible? perfect for mermaid days.
thank you, again. i am honoured to have been picked, and no small bit excited.

You're spot on - it is mermaidy, another dream skirt for me. My friend sent me the link and I must confess I am tempted...