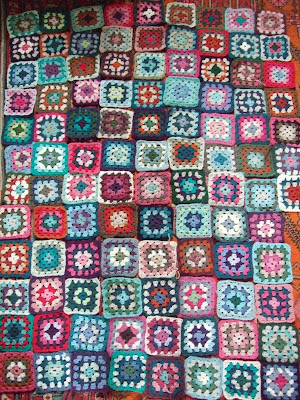 My mum says they dazzle her eyes, and my niece only likes the squares that are pink.  The girls at Prick Your Finger asked whether it was finished yet when I went in there yet again to delve down their £1 a ball sacj.  Even though it has felt like an obsession, it still isn't finished. There are squares that were crocheted when I was on the beach and look like sky, sea and sand and others that were done after days out that are the colours of ice cream and blackberries.  There is even one inspired by the rug they are laid out on.  I have scoured the seaside charity shops of Kent, Suffolk and Sussex to find yarn.  Much has been brought home and discarded.  I've got as far as one hundred and three squares, a nice prime number.  Five more to go and I will be able to start tidying up the last few squares, sewing it together and deciding on an edging.  Is it any wonder that I as still languishing on the letter G after the whole of September?
As respite I have been making glutney, a Hugh F-W recipe, from outsized courgettes, over-ripe tomatoes and apples though I've obviously got squares on the brain to judge by the gingham overkill. 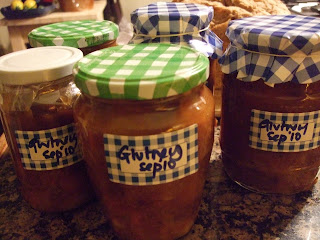 We have not even started on the green tomatoes yet.  We had the best crop of toms ever this year using these seeds  - the Costoluto Fiorentino were the best I have ever tasted - and they remained blight free until a week or so ago when the September damp settled in.  So for good measure, let me offer a link to the tomato recipe that has sustained us for the last month, one that takes about 10 minutes to make (between crocheting and making chutney).  Yotam Ottolenghi's Tomato Galette may sound more like a dance than a dish, but it is really rather gorgeous.  And it isn't square.
at 23:21

Ooh, lots of "G" busy-ness. Love the colours in those squares. Will definitely be giving the galette a try.

The squares look lovely (as does the gluttony/chutney for that matter! :0) )

Val
Rattling On put me on to this book if you are really keen. It worked for me.

Great job you've done there! Look froward to seeing the FO. And you can't have too much gingham...

Wonderful colours in your granny squares. Will you start a second one straight away? I always find that I have almost as much left over as I started with on a project like this.

I think I'll be having a bit of a break from those squares for a while. Other than the odd snooze under the FO.

Such lovely colours, Colleen. I love it. And hurrah for glutney too. I love the squares. I'm still working on the giant granny square blanket but I've really enjoyed playing with colours. I don't trust myself to sew all the squares together but it will be lovely to snuggle up under. I quite fancy making a bag from granny squares too.