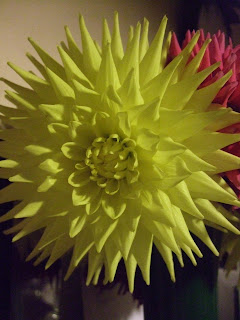 You may already know how much I like dahlias, and how I suffer from dahlia envy.  This one, alas, is not grown by me.  I bought a bunch at the Mudchute Community Fun Day on Sunday where our allotment society had a stall, a very attractive stall, a stall with a diversity of fruit and vegetables ranging from mundane potatoes, beetroot, carrots to more exotic offerings - winter melon, pak choi, jelly bean lookalike goji berries, celtuce and enormous gourds that may have been mo qua.  There was even - and I can hardly believe this myself - watercress. 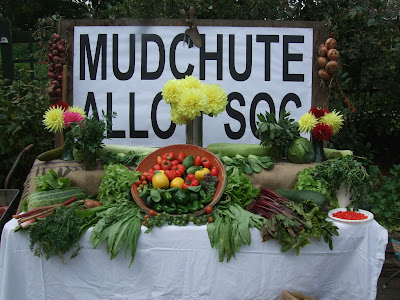 John was chief stylist responsible for setting up the stall and I sat dutifully by explaining what everything was to our visitors, handing out goji berries and working on my crochet in the lulls. I say this as if it was a chore but not at all. I really enjoyed chatting to everyone - the Spanish photographer who was desperate to buy some tomatoes because, she said, it was so hard to find good ones for sale; the Polish couple who knew all about the vitamin content of goji berries; the eccentric lady who was wheeling her be-ribboned cat around in netted buggy. Later in the afternoon, someone was press ganged into judging the veg (move over Joe Grundy) and a heap of rosettes were handed out. As only seven people had bothered to contribute stuff to the stall, the competition was not exactly stiff. 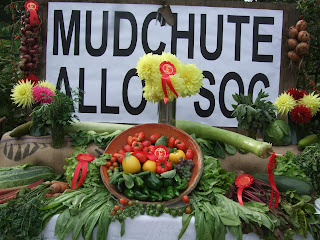 A first in show was not hard to come by.. My string of onions got a rosette and, bizarrely, one of our potatoes, just for being huge. The dish in the middle was given a rosette for looking good, though I have to say my tomatoes and yellow courgettes and Dave's green peppers and cherry toms made a rather stunning combo.  Brenda's dinner-plate sized dahlias scooped a first for best flowers.

Prizes for the cakes and preserves on the stall next to us were awarded on a rather more democratic basis. We were all offered a taste of each of the chutneys, jams and cakes and rosettes were handed out for those that got the most favourable comments. By common consent, the runner bean chutney, made using this recipe, was voted most delicious of all.

As for the dog, I can only assume it got a rosette for being smallest dog because I saw a huge hairy German Shepherd and he had one too. 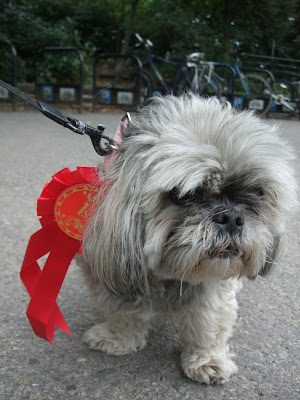 I guess summer really has ended now that the harvest is in though I'm holding out as long as I can before I cover my bare legs.  I had one last dip in the sea yesterday.  Goodness me, it was chilly.
at 11:59

The runner bean chutney recipe looks very interesting - only turmeric and mustard as the spices. Might give that a try out of curiousity. Lovely fruit and veg display by the way - compliments to John.

i love this. the beautiful display, the harrier, the dogeen. and thank you for the wonderful recipe link, and the seeds of italy link!