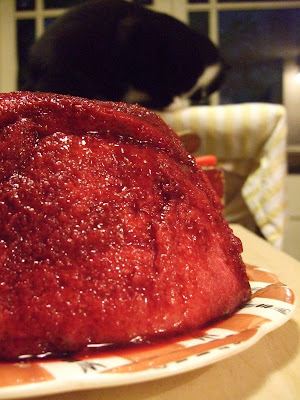 A couple of Saturdays ago when sun was forecast for the morning and rain for the late afternoon, we cycled up to Walthamstow Marshes to pick blackberries before the crowds of foragers arrived.  We managed several pounds before the rain came, with a vengeance.  We got drenched on the way home, hence no photos of pretty blackberries. The sacrifice was worth it because those blackberries went a long way.   Mixed with redcurrants and raspberries, we made a summer pudding of such ruby glossiness that we got out the best china and poured a glass of fizzy wine to go with it.  (There are lots of recipes around but you might like to look at the one on this rather lovely and very WI blog.)
Then there was the Heath Robinson excitement of making bramble jelly.  I followed Marguerite Patten's instructions, which included making a jelly bag and finding a suitable stool from which to suspend it while the thick purple juice from my 2lb of blackberries filtered through. 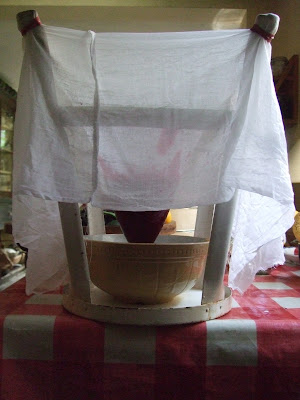 Those elastic bands abandoned by our postman came in handy because the bag was miles too big for the amount of blackberries I had. 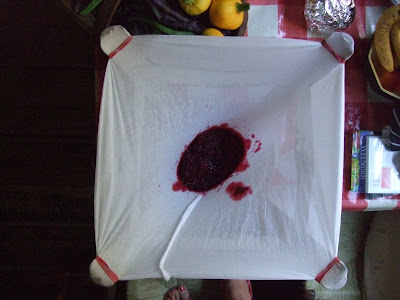 Unlike the murderously stained jelly bag, the resulting jelly is gorgeous looking, positively jewel-like, but is a little sweeter than it should be because I misread the recipe and added a bit too much sugar - it should be 1lb of sugar and 2 tablespoons of lemon juice to each pint of juice.  I ended up with two jars of jelly, not much after all that, but the fiddle-faddle was fun. 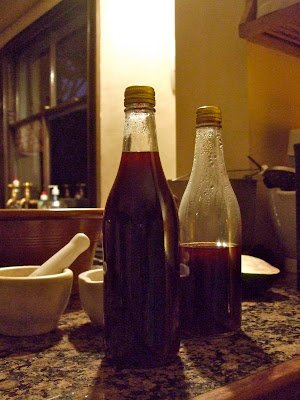 The alchemist in me was on a roll.  Inspired by Knit-Nurse's acidic adventures - many thanks! - I also mixed up some blackberry vinegar.  What I liked about this was stirring it up over several days until it was ready to bottle. Sheer simplicity, immensely versatile and intriguingly flavoursome. And you know what, there were even enough blackberries to make muffins, two dozen of them over a couple of days. 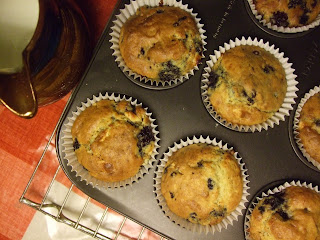 Glad to be of service! We find the blackberry vinegar makes a fabulous alternative salad dressing - my friend just dips bread into it and eats it as it is!

It all looks lovely..I miss blackberries
The elastic bands as cloth holders are inspired :0)

I LOVE picking blackberries. They almost invariably end up in a crumble but you've inspired me to be a bit more adventurous!

How lovely! I spent the afternoon, while Kate painted a "Charleston" type of pot with flowers, around the back of the summer house collecting the wild blackberries that I didn't know we had. Fun harvests. I'm hoping to make Blackberry Whiskey when I have enough!

You have been productive. That summer pudding looks splendid. (Would you believe I've never eaten it?). I bought plums the other day with the intention of making jam. They're still in the fridge.

that pud is a gorgeous gorgeous creature.