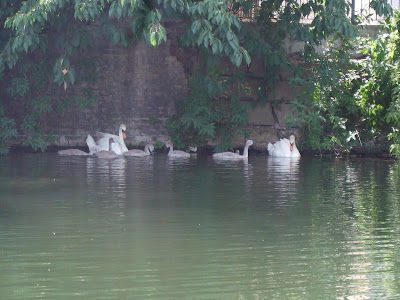 Remember the swan sitting on her nest with her mate standing watch?  This is the family out and about.  It took me a while to come across them - they were never around during the day, though I did see them one night.  Anyway, I'm glad they had such a respectable brood after all that vigilance. Today there were looking delectably cool in the shade of some overhanging tree.  I, on the other hand, was trying to dodge along shadowy places to stay out of the sun - enjoying the shade under avenues of plane trees and canal bridges.  It is simply too hot for me - I'm good up to about 25 degrees  but after that I go to pieces.  One day this week I even resorted to staring to clear the cellar as it was so invitingly cool compared to the rest of the house.

So it seems that most of my weekend has been devoted to staying cool. Yesterday, I had my first delicious dip in the sea.  Later, we had supper on the beach, prepared in a pal's beach hut and served on proper table, with plates and napkins, and chairs to sit on, watched the sun setting over the water as the temperature dropped. 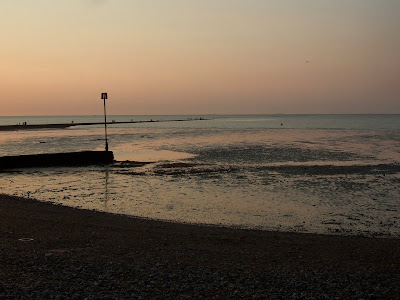 Today I have been trying to create a cool haven on the allotment.   Inspired by a one night display  from the archives at the V&A last Friday of "garden escapes" - if you have a chance pop in and see some of the structures in Architects Build Small Spaces -  I set up my deckchair striped camp, soaking my feet in a bowl of water to stay cool, sitting and stitching hexagons out of the sun until it was cool enough to gather the day's haul - courgettes, broad beans, and three kinds of lettuce. Dazzle, a red leaved cos, has looks that live  up to its name, but is already starting to bolt with the hear.  My Little Gems are living up to theirs too, catch-cropped with the broccoli, they are staying cool under the larger leaves of the brassicas. 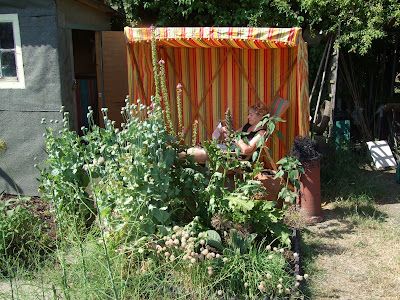 It was a decent haul, eaten when we got home with some of our first earlies and a bit of goat's cheese.
Pretty cool, I reckon.

PS Many thanks for all the encouraging comments on the last post.  I will do better.
at 00:32

Thanks for the swan update, they look very content.
I'm not looking forward to work with the weather. My classroom is flat roofed with only one tiny opening window. It gets unbearably hot. I suppose we shouldn't grumble...

I envy you the dip in the sea, I yearned for seas or rivers all weekend but my sprained ankle is still keeping me fairly immobile. Maybe next weekend...!

Great news about the swans - I still miss the excitement of seeing each year's new cygnets on the Serpentine. I have rivers and streams within walking distance (including a stream in the garden) but, sadly, no swans.

Love the sun shelter, by the way, and have sent details to my daughter, who has to stay out of the sun. She was at Glasto for the duration and ended up in the on-site A&E twice . . .

I am just loving the opportunity to be outside all day, every day. My laptop is now set up on the garden table, so I'm doing all my writing al fresco; there is stuff to do in the garden; every meal, from breakfast to supper, is taken outdoors, and the dogs have no desire to be inside - there are enough shady spots under the trees and bushes for all of them. A very different life from this time last year.

It is a worthy establishment that gives pleasure to the inhabitants and passers by alike. And blog readers, to boot.

That sounds like a pretty idyllic couple of days! Dinner at the beach hut must have been gorgeous, and your shady allotment spot looks lovely too.