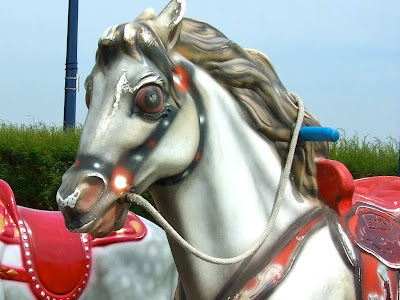 The story of how we ended up in Felixstowe yesterday is not an especially happy one.  It was hot and  I wanted to escape from tree pollen, so we decided that a quick trip to the North Kent coast would meet all  our criteria for a good day out.  Not so.  The southbound Blackwall Tunnel, just five minutes from home, was closed.  So we turned for Essex instead.  Mersea we thought, then, an hour later, missed the turning off the A12, took the next one, got caught in an accident induced traffic jam, turned back on the main road -in  the wrong direction - and thought, well, we haven't been to Felixstowe for many years. (This is a summary - I have spared you the silent pauses when swearwords simmered beneath the surface of civility).

It turned out to be a happy accident, an adventure, a re-discovery of the best aspects of a British seaside resort.  Perfect weather helped - warm but not hot, a slight breeze, a soft milkiness in the light.  We sheltered behind the boulder groynes, tested the North Sea (chilly) and, after a while, and in a better mood, we walked along the prom.  The clock on the top of Manning's Amusement Park played "I do like to be beside the seaside" on the hour - we were - and everyone was in a good humour, lots of handholding and smiling.  We carried on past the ice cream stalls, crazy golf, fish and chip and seaside rock sheds, the pier and the most bizarre Neptune I've ever seen, though top marks for the imaginative use of houseleeks on the tentacles.   It was understated, slightly decayed and at the same time almost perfect. 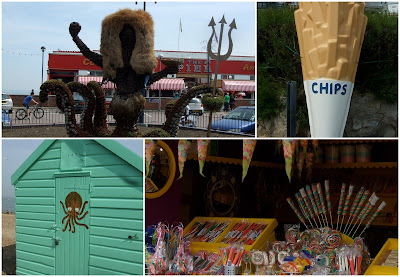 In the high street, a proper knick-knack free high street, we bought some essential ribbons and fabric at a well stocked haberdashers and admired the cafe ,but opted to take our egg and cress sandwiches down to the Spa Gardens overlooking the sea. 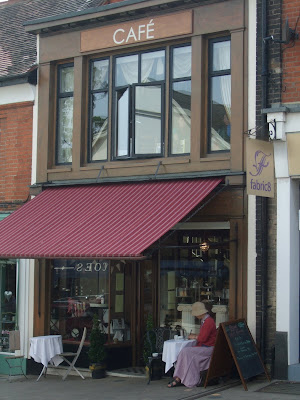 The Edwardian splendour of the gardens was rather jaded, and more than overgrown in places with valerian and arboreal ivy.  John made plans for restoration - yuccas, agaves, succulents. 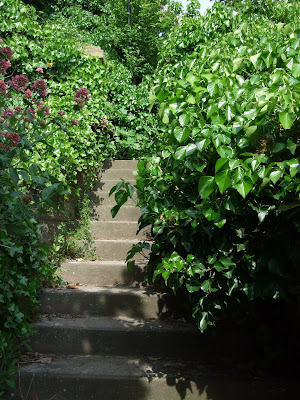 We carried on down to the Landguard Nature Reserve, a shingle peninsula with the impressive looming Port of Felixstowe and the estuary on one side and the North Sea on the other.  The shingle was packed with crambe maritima. 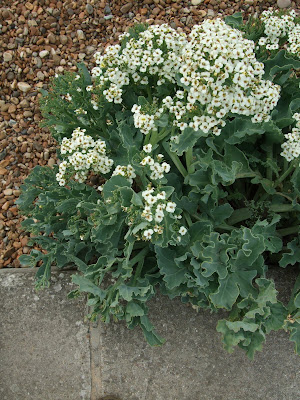 There were Martello towers, redundant gun emplacements, mystery stairways, linnets, white campion.  And is that viper's bugloss?  By now the sun had disappeared and light was starting to fade a little. It felt like rain. 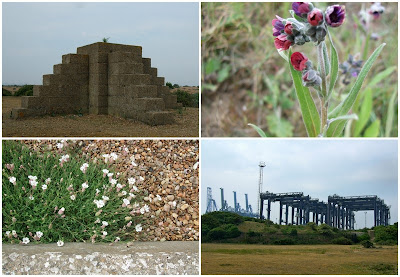 It was a long way home.  Must buy a new road atlas and remember that sometimes the best roads are the ones seldom travelled.
at 23:41

Well I'm glad that turned out nice
even if it wasn't the original destination it sounds like a Grand day out!

all roads lead somewhere else, don't they?

Lucy - we could not believe it either when this lady - for surely she is a proper lady - appeared. All she needs is a pair of Mary Janes to complete the ensemble.

During the time a friend of mine lived in Manningtree we used to walk the coast around Harwich and gaze across the estuary to Felixtowe, never quite knowing that there were kitsch charms to be found behind its rather austere cranes. I always enjoy having my perceptions shattered.

The cranes and containers were stunning close up and provided a surreal backdrop to the nature reserve. I think the fact that the port is so successful means that the town has a more varied economy and so isn't reliant on tourism.

Now Harwich - there's a town. The joys of the Trinity Buoy yard!

It's made me want to go to the coast now. Not necessarily the seaside, but just to get a whiff of sea air...

What a lovely, unexpected adventure. I love that you ended up somewhere completely by accident and then found such pleasure in the details.

Reading this reminds me to enjoy the details more and I love your description of slightly milky light.

How lovely that it all turned out well in the end!

I loved that beach hut in one of the pictures!

It all sounds brilliant and I can almost taste the salt in the air.
Is that woman in the cafe photograph actually writing? A postcard, maybe?

I want to scrap today's plan to paint the kitchen , now . I'd much rather crunch along a pebbly beach somewhere , eating egg and cress sandwiches .