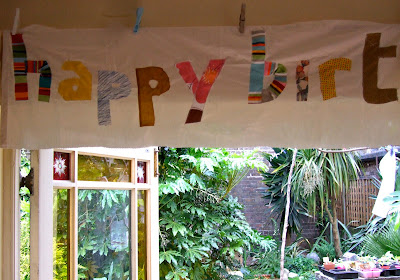 There is a great Posy Simmonds cartoon about a school play where working mother Mrs Weber's children are robins in the Christmas production.  The young Webers' robin costumes are perfect - beaks, tails, rosy red breasts and all.  The rest of the kids are dressed in tee-shirtvv  s and tights.  It spoke to me, the mother who on the day her son started nursery turned up with the home made shoe bag, boy's name name appliqued on with love and tears, while all the other kids had plastic bags.  Yes, the guilt burden of those absences at the school gates still niggles.

All background to the reason why I decided this morning, the birthday of my son, a young man (in blue) past the age of majority, to make a birthday banner.  I've wanted to make one for years.  So, there I was this morning, with plenty of time because he never gets up before midday after a night out, cutting up scraps and making the banner.  Except that today he decided to get up earlier than usual. Unfortunately I'd only got as far as "happy birt".

It was not so bad in the end.  I got the rest of the banner finished before he appeared downstairs.  My mum turned up with his birthday card- "Did you make that?  That's nice.  Except I would have used capital letters.  And that yellow "a" doesn't really stand out, does it?"   "No mum, but it is the same fabric that I used for his shoe bag when he was tiny so I quite like it being there." After which we spent the afternoon having a conversation not dissimilar to a Count Arthur Strong show while I tried to make Dan Lepard's Dark Chocolate Berry Cake.  It would be churlish to blame my misreading of the chocolate proportions on my mum's monologue about bins on the streets, postal research surveys and the merits of the 339 bus.   And it was entirely my fault that I took a risk on taking my mum home and getting back in time to get the cake out of the oven but got stuck in a traffic jam by taking the supposedly quicker route home. The cake was not a great success.  Fortunately someone else had made him a box of chocolate brownies.

Do I still feel guilty?  Not now. I offered to make a roast dinner and he said he'd prefer a Chinese Take Away as a birthday treat.  We've have never ordered one before. He really did have deprived childhood.

So quite a happy birthday for him after all though I suspect that having a happy birt might become part of our family mythology, such as it is.

I put up balloons and banners each year for the girls. I love your fabric banner, though, and might have to 'borrow' the idea! I used to make everything for mine when they were at school, even the jumpers and cadis for the uniform at primary. It's been outlawed there now (has to have the school logo on these days) which I find very sad. I used to like feeling they had a reminder of home with them.

A belated "happy birt" to not so young John. I love your banner - I could never in a million years produce anything half as good.
My two often remind me of the packed lunches they took to school. They had felafel and carrot sticks when everyone else had white bread sandwiches. Oh the shame.

My poor two were consigned a lot of brown stuff for their packed lunches, brown peanut buter on brown bread with brown honey....don't ask!!

I love the happy birt banner. I remember being quite embarrassed about my homemade gym bag and name tapes in colours!